They shook hands before and after the game and had a brief chat in the third end but otherwise the two Koe brothers fought tooth-and-nail Wednesday evening, both desperately needing a win – albeit for different reasons – at the Tim Hortons Brier, presented by SecurTek Monitoring Solutions.

In the end a ninth-end miss by Jamie, skip of the Northwest Territories team out of Yellowknife, allowed big brother Kevin and his Alberta (Calgary) foursome to take a 7-4 win that kept alive their playoff hopes. Jamie, who is joined by third Mark Whitehead, second Brad Chorostkowski, lead Robert Borden, alternate Bill Merklinger and coach Terry Shea, said it wasn’t too enjoyable playing his brother because both needs the win “so it wasn’t the friendliest game that people might think it was. “We were battling, we need some wins real bad to stay out of (pre-qualifying) and they need wins real bad to stay in the playoff hurt. It was a good battle but in the end one missed shot in nine cost us.” Kevin, with third Marc Kennedy, second Brent Laing, lead Ben Hebert, alternate Jamie King and coach John Dunn, scored three in the third but big brother, who had one in the second, scored two in the third. Alberta responded with two in the fifth, a steal of one in the sixth and put the game away when Jamie’s final shot flashed to give Alberta two in the ninth. “We played pretty good and so did they,” said Kevin, who was sick the first two days of the Tim Hortons Brier and still finds himself lacking a little energy. “My brother made a lot of good shots to keep them in it. We had control most of the game so we live to play another game.” While the brothers may not have enjoyed the game, Kennedy said it was a fun game for the rest of the players. “Two great players, great curling family, nicest guys in the world so it was fun out there. Jamie made a lot of good shots. You know he’s going to come out to play when he plays his younger brother. He called a conservative game and made some great shots and that’s why the game was tight.” 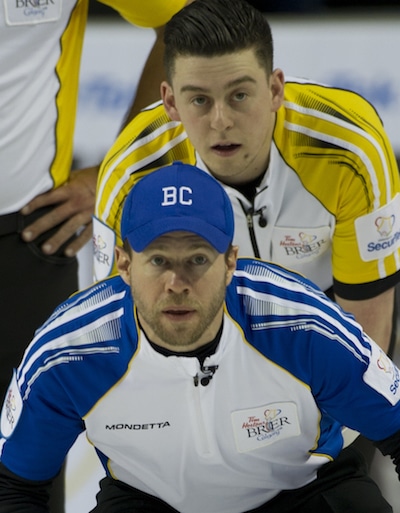 In the other evening games, Steve Laycock of Saskatchewan (Saskatoon) scored one in the 11th to get by Adam Casey of Prince Edward Island (Charlottetown) 7-6, Jeremy Mallais of New Brunswick (Saint John) stole three in the sixth to beat Mark Kean of Ontario (Fenelon Falls) 9-4 and Reid Carruthers of Manitoba (Winnipeg) made a great takeout through a very tight port to score three in the eighth and beat Jim Cotter of B.C.(Vernon) 8-3. The results leave Northern Ontario at 9-0 (clinched a berth in the Page 1-2 playoff game), Newfoundland-Labrador at 7-2, Quebec and Team Canada at 6-3, Saskatchewan at 5-3, Manitoba and Alberta at 4-4, B.C. at 3-5, Ontario, P.E.I. and New Brunswick at 2-6 and Northwest Territories 0-8. There are three draws Thursday, at 8:30 a.m., 1:30 p.m. and 6:30 p.m. MT. The morning draw will feature two key games — unbeaten Northern Ontario versus 7-2 Newfoundland-Labrador and two 6-3 teams, Quebec versus Canada. TSN/RDS2, the official broadcast partner of Curling Canada’s Season of Champions, will provide complete coverage of the Tim Hortons Brier, leading to the gold-medal game on March 8 at 5 p.m. The winner of the 2015 Tim Hortons Brier will represent Canada at the Ford World Men’s Championship, March 28-April 5 in Halifax, in addition to qualifying for the 2015 Home Hardware Canada Cup in Grande Prairie, Alta., the 2016 World Financial Group Continental Cup in Las Vegas and the 2016 Tim Hortons Brier in Ottawa For ticket information, go to www.curling.ca/2015brier-en/tickets/ This story will be posted in French as soon as available at https://www.curling.ca/2015brier-fr/