Mark Kean scored one in extra end to nip Steve Laycock 8-7 and prevent Saskatchewan from claiming the final playoff berth. Saskatchewan will play British Columbia in the final draw. If Laycock, third Kirk Muyres, second Colton Flasch, lead Dallan Muyres, alternate Gerry Adam and coach Lyle Muyres win they move into the Page playoff 3-4 game against Team Canada. If they, lose there will be a tiebreaker scenario involving Saskatchewan, Quebec, B.C. and possibly Alberta if it wins its final game. Tiebreakers would be played at 1:30 p.m. and 8 a.m. MT Northern Ontario finished at 10-1 and will play 9-2 Newfoundland-Labrador in the Page playoff 1-2 game at 6:30 p.m.; the winner of the 1-2 game will advance to Sunday’s 5 p.m. gold-medal game. The loser will drop to the semifinal Saturday at 6 p.m. against the winner of the Page playoff 3-4 game. Thursday evening’s other games saw Kevin Koe of Alberta (Calgary) steal one in the 10th to edge Reid Carruthers of Manitoba (Winnipeg) 8-7, Brad Jacobs of Northern Ontario (Sault Ste. Marie) stole two in the 10th to beat Pat Simmons and Team Canada (Calgary) 6-3 and Brad Gushue of Newfoundland-Labrador (St. John’s) beat Jean-Michel Ménard of Quebec (St-Romauld) 7-4. Friday’s results left Northern Ontario atop the standings at 10-1 followed by Newfoundland-Labrador at 9-2. Team Canada is at 7-4 followed by Saskatchewan at 6-4, Quebec at 6-5, B.C. and Alberta at 5-5, Manitoba, P.E.I. and Ontario at 4-6, New Brunswick at 2-8 and the Territories at 0-10. Laycock appeared to have his game under control after scoring three in the seventh to take a 4-2 lead. But it didn’t last long. Kean, third Mat Camm, second David Mathers, lead Scott Howard and alternate/coach Bryan Cochrane from Fenelon Falls, stunned Laycock with a five-ender. “It wasn’t a real well-played game by either team, very defensive,” said Laycock. “We got a big break in seven where we got the three to go two up and the eight end, from second stones on, everything that could possibly have gone wrong, did. “We’ll just have to wipe that from our memories and come back tomorrow. If we get good rest, wipe it and come back playing like we were earlier today I think we’ll be fine. And if not it’s going to make for a long day for everybody with the tiebreakers so hopefully we can avoid that.” Koe, who skipped a different team to the Tim Hortons Brier title last year, is among the teams happy to see Ontario, the second youngest team here, upset Saskatchewan. Alberta had figured they had no chance after losing a last-rock decision to Saskatchewan earlier in the day. 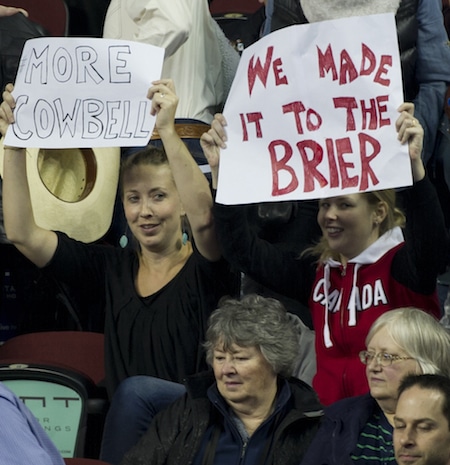 Fans are getting their money’s worth in the late stages of the 2015 Tim Hortons Brier. (Photo, Curling Canada/Michael Burns)

“Apparently we’re still in it somehow,” Koe said after he stayed alive when a draw to the four-foot by Carruthers came up just an inch or two short. “It’s nice to have a sniff going into tomorrow. It’s still a long-shot but as of now we’re still breathing.” “What a silly game, that’s the miss we get?” said Alberta third Marc Kennedy. “Reid hadn’t missed a shot all game and that’s the miss we get. It’s just a funny sport some time.” TSN/RDS2, the official broadcast partner of Curling Canada’s Season of Champions, will provide complete coverage of the Tim Hortons Brier, leading to the gold-medal game on March 8 at 5 p.m. The winner of the 2015 Tim Hortons Brier will represent Canada at the Ford World Men’s Championship, March 28-April 5 in Halifax, in addition to qualifying for the 2015 Home Hardware Canada Cup in Grande Prairie, Alta., the 2016 World Financial Group Continental Cup in Las Vegas and the 2016 Tim Hortons Brier in Ottawa For ticket information, go to www.curling.ca/2015brier-en/tickets/ This story will be posted in French as soon as possible at https://www.curling.ca/2015brier-fr/