The win by Laycock and his Saskatoon team of third Kirk Muyres, second Colton Flasch, lead Dallan Muyres, alternate Gerry Adam and coach Lyle Muyres, improved their record to 7-4, eliminated the chance for tiebreakers and dashed the hopes of Alberta, B.C., and Quebec, who would have been in the tiebreakers if B.C. had won. “They definitely pushed us all the way,” Laycock said of Cotter’s Vernon team of third Ryan Kuhn, second Tyrel Griffith, lead Rick Sawatsky, alternate Grant Olsen and coach Pat Ryan. “If I hadn’t played my A game we wouldn’t have had a hope. We played hard all week to get ourselves in that position and not have to worry about other sheets.” In the other final draw games, Kevin Koe of Alberta (Calgary) beat Jeremy Mallais of New Brunswick (Saint John) 8-3, Mark Kean of Ontario (Fenelon Falls) beat Jamie Koe of Northwest Territories (Yellowknife) 8-4 and Adam Casey of Prince Edward Island (Charlottetown) beat Reid Carruthers of Manitoba (Winnipeg) 5-2. The final standings have Northern Ontario 10-1, Newfoundland-Labrador 9-2, Saskatchewan and Team Canada 7-4, Alberta and Quebec 6-5, B.C., Ontario and P.E.I. 5-6, Manitoba 4-7, New Brunswick 2-9 and Northwest Territories 0-11. Northern Ontario will play Newfoundland-Labrador in the Page 1-2 game at 6:30 this evening, with the winner advancing to Sunday’s 5 p.m. final. The loser drops to Saturday’s 6 p.m. semifinal against the winner of Saturday’s 1 p.m. Page 3-4 game between Saskatchewan and Team Canada. The key end for Saskatchewan and B.C. came in the fifth when the teams had 11 rocks in a jagged line from the front of the house to the back. B.C. was counting two until Laycock drew the edge of the button as second shot. Cotter’s draw attempt just rubbed a stone in the eight-foot and Laycock then used a gentle double tap back to move himself to shot. Cotter’s final rock draw attempt came up light, letting Laycock steal the pivotal single for a 2-0 lead. “Both teams were just kind of jockeying for position on the left-hand side of the sheet,” explained Laycock, who finished 6-5 last year and just missed the playoffs. “Jim bounced off on his and we made a nice little tap-up to get shot rock. He was playing a draw on the swingy side and I think both teams kind of made a lot of shots from there later in the game but that time neither team really knew how swingy it was and he crashed on the top eight one.” 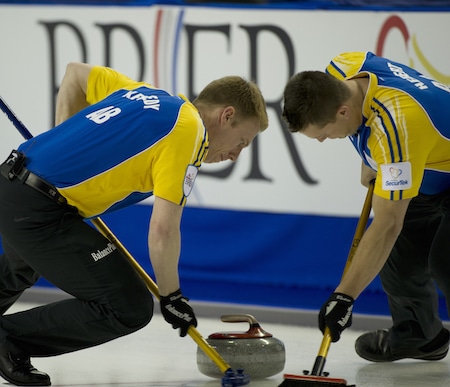 “We just slivered the top one,” Cotter said of his first shot. “If we get that one in there, we’re sitting two and in great shape. That’s just the way it goes. We had to come back, get a deuce and we just weren’t able to manufacture that.” They tried in the 10th but in the end left Laycock the runback take-out, the type of shot he and his teammates had executed nearly perfectly a number times in the game. “I wasn’t expecting it would be an easy one because early in the end they had the corner they were using and later they had our two rocks, which were pretty advantageous to them,” Laycock said. “I knew it would have to be either one where I blast off a freeze or make the runback. So we had options, I just had to execute a good shot.” To the dismay of three other teams he made the shot. TSN/RDS2, the official broadcast partner of Curling Canada’s Season of Champions, will provide complete coverage of the Tim Hortons Brier, leading to the gold-medal game on March 8 at 5 p.m. The winner of the 2015 Tim Hortons Brier will represent Canada at the Ford World Men’s Championship, March 28-April 5 in Halifax, in addition to qualifying for the 2015 Home Hardware Canada Cup in Grande Prairie, Alta., the 2016 World Financial Group Continental Cup in Las Vegas and the 2016 Tim Hortons Brier in Ottawa For ticket information, go to www.curling.ca/2015brier-en/tickets/ This story will be posted in French as soon as available at https://www.curling.ca/2015brier-fr/