Brad Jacobs of Northern Ontario saw an opportunity in the fifth end so he took it, scored three and went on to defeat Brad Gushue of Newfoundland-Labrador 7-5 in the Page playoff 1-2 game Friday at the Tim Hortons Brier, presented by SecurTek Monitoring Solutions. 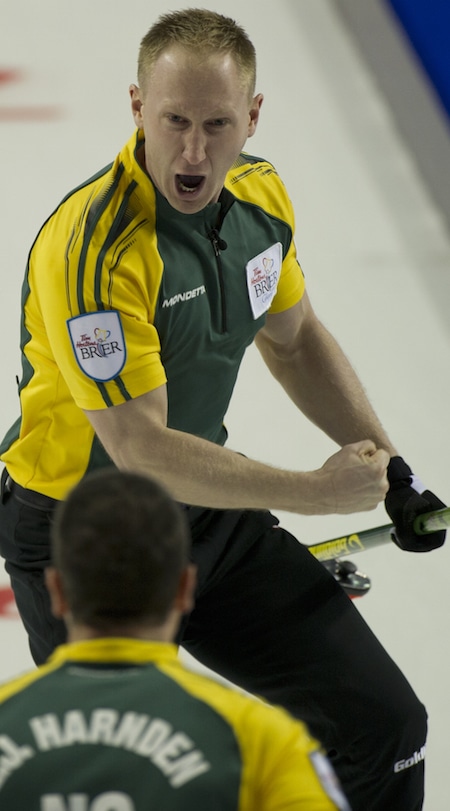 The win sends Jacobs, third Ryan Fry, second E.J. Harnden, lead Ryan Harnden, alternate Eric Harnden and coach Tom Coulterman into Sunday’s final at 5 p.m. (all times Mountain), where they will be trying to win the Tim Hortons Brier for the second time in three years. Gushue, third Mark Nichols, second Brett Gallant, lead Geoff Walker and coach Ken Bagnell, will play in Saturday’s’s semifinal at 6 p.m. against the winner of the Page playoff 3-4 game between Saskatchewan and Team Canada. “In my opinion that’s one heck of a curling game and if you’re watching . . you got your money worth. That was really entertaining,” Jacobs said afterwards. Entertaining was also seeing he and his rink erupt with arm pumps and yells when Jacobs made a delicate tap to score three in the fifth for a 4-3 lead that turned the game completely. “I think we were all waiting to kind of explode this week,” said Jacobs. “We’ve been playing so well I haven’t really had any tough shot for points and we finally had a tough one. And we needed it because our spirits were a little low and that picked us right back up. That was definitely a turning point for us.” He looked at drawing for two to tie but saw the chance for three and took it. “Get over there! Get over there.” Jacobs yelled at his stone as it hung out until the final few metres before curling just enough to kick out the Gushue stone and count three. Gushue said the fifth end wasn’t that bad until his two shots. “We completely mis-swept my first one and then I threw a really bad one with my second, got a little outside of the intended line and gave him a shot for three,” said Gushue. “The first was the big mistake where we took one of theirs out, but took one of ours out in the process and put ourselves in a tough position. Having said I should have made that draw and worst case give up one or two. “Fast forward to the eighth and another bad line call. We over-swept the double. Make that and we’re one up, you force them in nine and we would have the hammer coming home. So just a lot of opportunities missed.” Gushue, who won Olympic gold in 2006 throwing fourth rocks for Russ Howard, tried to hide his final stone in the ninth end in a steal attempt but left Jacobs the chance for a deuce and he made the perfect tap to do just that and take a two-point lead into the 10th. Gushue was the sharper team in the early ends, forcing Jacobs to draw against five for one in the first end. After Northern Ontario couldn’t get enough roll to hide a stone on three straight attempted hit and rolls, Gushue had a routine hit and stick for two in the second. Gushue stole one in the fourth when Jacobs’s last-rock draw to the button – this time facing four Newfoundland-Labrador counters — slid just inches deep. 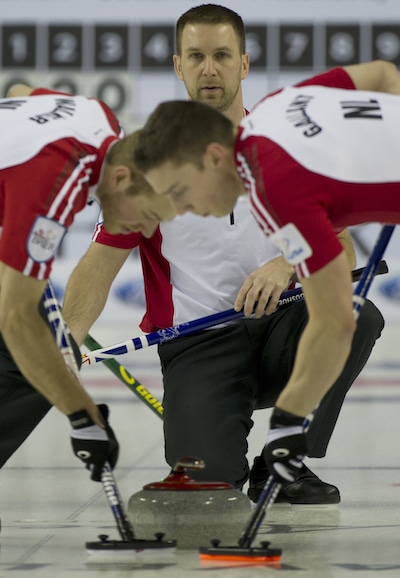 But Jacobs regained control of the game in the fifth and held it to the end. This is Gushue’s 12th trip to the Tim Hortons Brier and he has never won it. He reached the final only once, in 2007 when he lost to Glenn Howard. Steve Laycock and his Saskatoon team earned their spot in the playoffs earlier Friday with a 4-2 win over Jim Cotter of B.C. (Vernon). That win gave Laycock seven wins and ensured there would be no tiebreakers and set up a showdown with the Calgary-based Team Canada foursome being skipped by Pat Simmons. The final round-robin standings have Northern Ontario 10-1, Newfoundland-Labrador 9-2, Saskatchewan and Team Canada 7-4, Alberta and Quebec 6-5, B.C., Ontario and P.E.I. 5-6, Manitoba 4-7, New Brunswick 2-9 and Northwest Territories 0-11. TSN/RDS2, the official broadcast partner of Curling Canada’s Season of Champions, will provide complete coverage of the Tim Hortons Brier, leading to the gold-medal game on March 8 at 5 p.m. The winner of the 2015 Tim Hortons Brier will represent Canada at the Ford World Men’s Championship, March 28-April 5 in Halifax, in addition to qualifying for the 2015 Home Hardware Canada Cup in Grande Prairie, Alta., the 2016 World Financial Group Continental Cup in Las Vegas and the 2016 Tim Hortons Brier in Ottawa For ticket information, go to www.curling.ca/2015brier-en/tickets/ This story will be posted in French as soon as available at https://www.curling.ca/2015brier-fr/