Pat Simmons and Team Canada scored one in the 11th end Saturday to get past Steve Laycock of Saskatchewan 8-7 and advance to the semifinal of the Tim Hortons Brier, presented by SecurTek Monitoring Solutions. 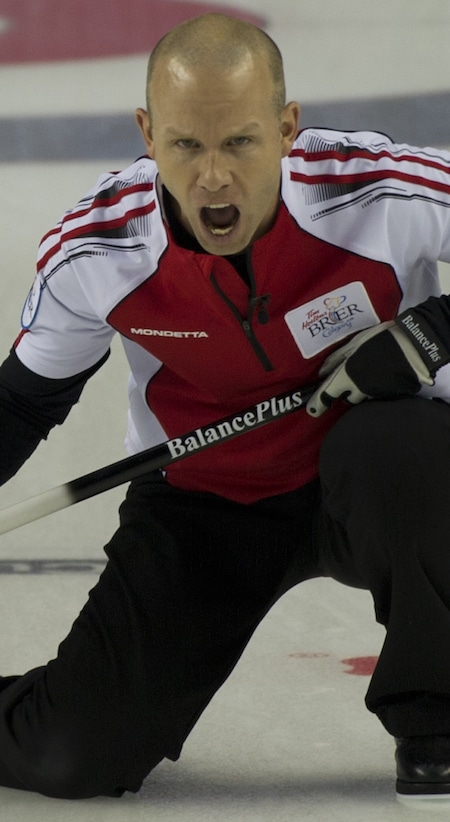 Laycock’s final shot, trying to get at Canada’s counter buried at the back of the button, just rubbed one of his own stones at the top of the four-foot, leaving Simmons not having to throw his last rock to win the Page 3-4 playoff game. “I kind of had a feeling at the second hog line it wasn’t going to quite get there,” Laycock said of the shot. “It was really close but it was going sideways. I would have really liked to have seen him have to make his last shot because it was a tough spot to make that out-turn draw.” Simmons admitted they were lucky to escape 10. “Very fortunate,” he said. “They had a great opportunity there to win. It gets so straight at the end of the game and I think that caught him a little bit on that one. Looked like he had it made out of his hand.” Canada advances to Saturday evening’s 6 p.m. semifinal against Brad Gushue of Newfoundland-Labrador. Gushue, who is searching for his first Tim Hortons Brier title in 12 tries, lost a tight 7-5 decision to Brad Jacobs of Northern Ontario in Friday’s Page 1-2 playoff game. 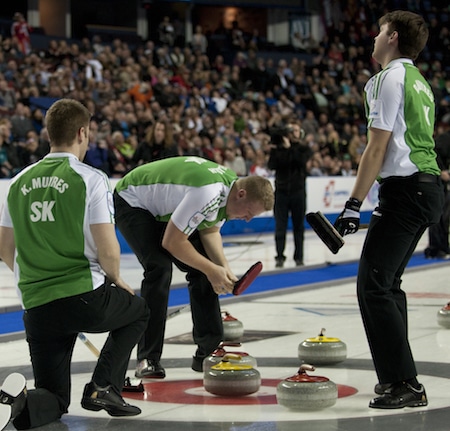 Jacobs and his Olympic championship team is in Sunday’s 5 p.m. final going for its second Tim Hortons Brier title in three years. Saskatchewan will play in Sunday morning’s bronze-medal game. Down by one in the fifth, Canada got a huge break to score three. Four straight uncharacteristic half-misses by Kirk Muyres and Laycock left Simmons an easy draw for three and a 4-2 lead. “The fifth end was finally paying for how badly we were playing,” said Laycock. “We really didn’t set up any ends good in the first half of the game and that was the first time we paid for it.” Saskatchewan’s inconsistency almost cost them again in the sixth. With Canada hidden behind a jagged line of guards, Laycock’s first attempt at an angled runback ran straight. Simmons then drew to second shot. This time Laycock’s do-over was nearly perfect, getting both Canada counters, leaving Saskatchewan to count one and likely save the game at that point. “That was disappointing because I basically threw the same shot twice and it picked on my first one,” explained Laycock. “If I make that one it’s very realistic we could score three or four that end. It was nice to make it the second time to get the point but once Pat put an extra rock in there it was a completely different dynamic on what that shot could do for us.” Simmons, third John Morris, second Carter Rycroft, lead Nolan Thiessen, alternate Tom Sallows and coach Earle Morris, got two in the ninth and appeared to have the game in hand, up 7-5 going into 10. But Laycock and his Saskatoon team of third Kirk Muyres, second Colton Flasch, lead Dallan Muyres, alternate Gerry Adam and coach Lyle Muyres, created their chance to win with last rock. 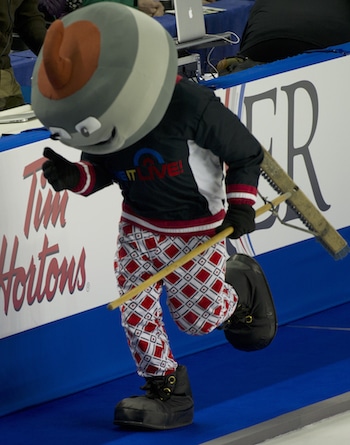 Slider had the fans revved up on Saturday at the Scotiabank Saddledome. (Photo, Curling Canada/Michael Burns)

Laycock had a double for a possible three but his shooter just rolled out and they had to settle for two and the 7-7 tie. “Ten was the shot,” said Laycock. “If we were just a little more patient with the line call but I was just whiskers off, you can’t really fault that. It was close, that’s the way it goes sometimes.” TSN/RDS2, the official broadcast partner of Curling Canada’s Season of Champions, will provide complete coverage of the Tim Hortons Brier, leading to the gold-medal game on March 8 at 5 p.m. The winner of the 2015 Tim Hortons Brier will represent Canada at the Ford World Men’s Championship, March 28-April 5 in Halifax, in addition to qualifying for the 2015 Home Hardware Canada Cup in Grande Prairie, Alta., the 2016 World Financial Group Continental Cup in Las Vegas and the 2016 Tim Hortons Brier in Ottawa For ticket information, go to www.curling.ca/2015brier-en/tickets/ This story will be posted in French as soon as available at https://www.curling.ca/2015brier-fr/