In a game that saw both sides miss a number of scoring opportunities, Simmons made a last-rock double takeout to score three and give Canada an 8-6 semifinal win over Brad Gushue and end the Newfoundland-Labrador skip’s hopes of finally winning the Tim Hortons Brier in this his 12th appearance. “I liked the throw out of my hand,” Simmons said of the shot. “It’s one of those you just try not to overthrow, if I hit it half-high we’re in trouble. It’s a fairly straight spot and it worked out good.” For Gushue it was another dream shattered and he broke down in post-game interviews and needed to leave for several minutes to compose himself. “I felt this was our year, I really did,” he said, adding this loss was one of the toughest. “The guys played well enough. I missed some shots last night and tonight that I don’t normally miss and that’s disappointing. A shot here, a shot there each night and we’re playing tomorrow night.” Gushue said Simmons made a good final shot but one that wasn’t as difficult as he wanted to leave him. “We needed an inch or two more curl on my last one to make it really difficult. But just too many opportunities missed.” Team Canada will now meet Brad Jacobs of Northern Ontario in Sunday’s 5 p.m. (all times Mountain) final. Jacobs won his berth in the final by beating Gushue in the Page 1-2 playoff game on Friday. Jacobs will be gunning for his second Tim Hortons Brier title in three years. Simmons, second Carter Rycroft and lead Nolan Thiessen will be after their second straight championship, with two different skips. Last year they won with Kevin Koe skipping and he left to form a new team. John Morris joined the team as skip but after the team began the Tim Hortons Brier 2-3, Morris stepped down as skip and Simmons took over. Since then they have won seven and lost just once, a 6-3 loss to Jacobs in their final round-robin game. Newfoundland-Labrador will play Saskatchewan in Sunday morning’s bronze medal game at 9:30. Saskatchewan lost the Page 3-4 playoff game to Canada earlier Saturday, 8-7 in 11 ends. 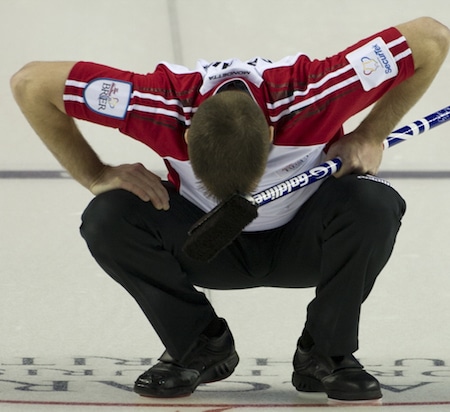 “We’ll come out and play hard, maybe hung over, but we’ll play hard,” Gushue said of that game. Gushue, third Mark Nichols, second Brett Gallant, lead Geoff Walker and coach Ken Bagnell missed two glorious opportunities to take control of the game. In the sixth they had a chance for three but on his attempted double couldn’t get Canada’s second stone out of the house and settled for a pair. In the ninth he had a hit-and-stick shot for three but his shooter just rolled out and again left him with two and up by just one going into the 10th. “The ninth end was a little scary,” said Simmons. “We had a bad pick and then two misses followed that up so it got a little dicey. Other than that there was the odd shot here and there but otherwise a fairly well curled game.” TSN/RDS2, the official broadcast partner of Curling Canada’s Season of Champions, will provide complete coverage of the Tim Hortons Brier, leading to the gold-medal game on March 8 at 5 p.m. The winner of the 2015 Tim Hortons Brier will represent Canada at the Ford World Men’s Championship, March 28-April 5 in Halifax, in addition to qualifying for the 2015 Home Hardware Canada Cup in Grande Prairie, Alta., the 2016 World Financial Group Continental Cup in Las Vegas and the 2016 Tim Hortons Brier in Ottawa For ticket information, go to www.curling.ca/2015brier-en/tickets/ This story will be posted in French as soon as available at https://www.curling.ca/2015brier-fr/