There is plenty of room for improvement, but the key statistic for Team Canada was in the win column on Saturday night in Sapporo, Japan. 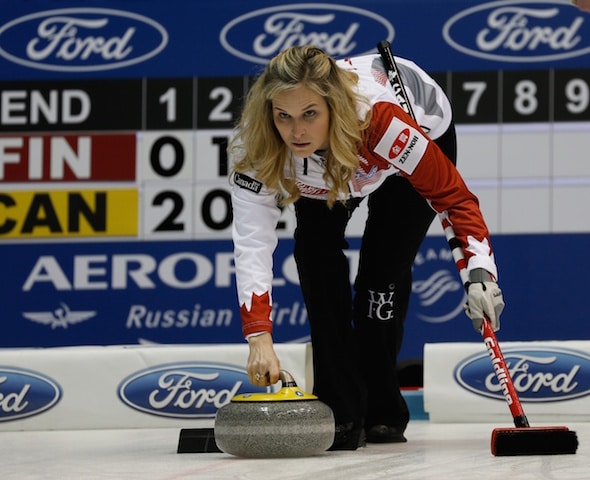 Jennifer Jones’s Winnipeg team — third Kaitlyn Lawes, second Jill Officer, lead Dawn McEwen, alternate Jennifer Clark-Rouire, team coach Wendy Morgan and national coach Elaine Dagg-Jackson — opened the 2015 ZEN-NOH World Women’s Curling Championship, presented by Ford of Canada, with a nailbiting 9-6 win over Finland’s Sanna Puustinen at the Tsukisamu Gymnasium. It was a game that wasn’t decided until a 10th end that seemed to be going Finland’s way, trailing by one but sitting two with hammer after Lawes had hogged a guard attempt. But Lawes responded magnificently with a wonderful hit-and-roll behind cover that would set up Canada’s game-winning steal of two when Puustinen rubbed on a guard on her hit attempt to force extra ends. “She made a big shot when she had to, and she always does,” said Jones of Lawes, who was making her World Championship debut. “That was the thing about this game — when someone missed, and we did have a few too many misses out there, the next person would pick up and make a good shot and that’s what it’s all about.” The Canadians, who’d never lost to Finland in 12 previous encounters at the World Women’s Championship, opened the game in ideal fashion, scoring deuces in the first and third ends while holding Puustinen’s team to singles in the second and fourth ends. The first-end deuce was the result of a perfect freeze by Lawes, and when Puustinen tried to unlock the freeze, she ended up losing her own backing stone and the shooter to leave Canada counting and set up the eventual deuce. In the third, Jones had a shot at three but was light with her final delivery and settled for two to take a 4-1 lead. 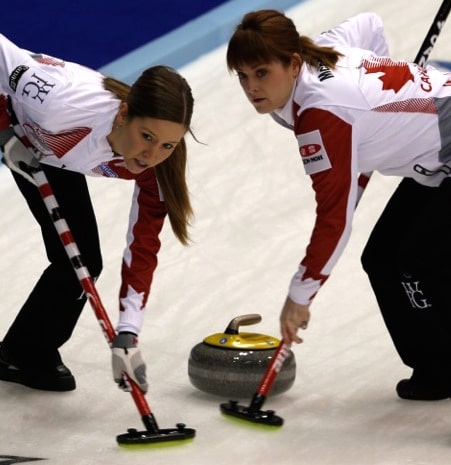 But the momentum started turning in the second half of the game. After forcing Team Canada to one in the fifth, Finland cracked a game-tying three in the sixth when Jones was light on her last-rock come-around attempt, leaving Puustinen an open draw for the trey. The teams would then proceed to trade forced singles the next three ends, giving Canada the one-point lead going into the 10th end. “I was excited, and it was just exciting to play,” said Lawes. “We’ve been here a few days, and when you have that anticipation, you get anxious to get on the ice. I thought we came out pretty sharp; we went two-force-two and mathematically it was looking pretty good until we gave up the three. But it felt good out there and it was fun to get playing.” Canada gets Sunday morning off in Sapporo before two highly anticipated games featuring the three teams that were on the podium at the Sochi Winter Olympics. The Jones team, golden in Sochi, plays bronze-medallist Eve Muirhead of Scotland at 2 p.m. local time (1 a.m. Eastern) and Sweden’s Margaretha Sigfridsson at 7 p.m. local (6 a.m. ET) in a rematch of the Olympic final. “We’re playing two amazing teams that we have a ton of respect for,” said Jones. “We’re going to have to be sharper tomorrow in order to be successful.” Switzerland’s Alina Pätz and China’s Sijia Liu both posted 2-0 Saturdays and top the standings going into Day 1 in Sapporo. Here is the remainder of Canada’s round-robin schedule, with the broadcast plans (all times ET; all games live on TSN network unless otherwise noted): March 15 — vs. Scotland (Eve Muirhead), 1 a.m. (TSN2) March 15 — vs. Sweden (Margaretha Sigfridsson), 6 a.m. March 15 — vs. China (Sijia Liu), 8 p.m. March 16 — vs. Russia (Anna Sidorova), 6 a.m. March 17 — vs. U.S.A. (Aileen Sormunen), 1 a.m. March 17 — vs. Denmark (Lene Neilsen), 6 a.m. March 17 — vs. Norway (Kristin Moen Skaslien), 8 p.m. (TSN1/4) March 18 — vs. Switzerland (Alina Pätz), 6 a.m. March 18 — vs. Germany (Daniela Driendl), 8 p.m. (TSN1) March 19 — vs. Japan (Ayumi Ogasawara), 1 a.m. For Team Canada updates, go to www.curling.ca. Follow us on Twitter, @curlingcanada. For live scoring, standings and team lineups from the 2015 ZEN-NOH World Women’s Curling Championship, presented by Ford of Canada, go to: https://wwcc2015.curlingevents.com The French version of this story will be posted as soon as possible at www.curling.ca/?lang=fr