SAPPORO, Japan — It took just one end, and eight practically perfect curling shots, to establish that it was a very different Team Canada on the ice Sunday afternoon at the Tsukisamu Gymnasium. 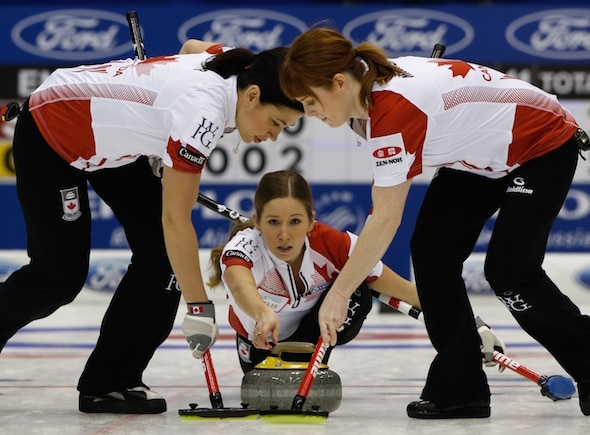 On Saturday night, Jennifer Jones’s Winnipeg team struggled to get a handle on the ice in its opening game of the 2015 ZEN-NOH World Women’s Curling Championship, presented by Ford of Canada, before scraping out a win over Finland’s Sanna Puustinen. Sunday, though, the Canadians established early against Scotland’s Eve Muirhead that they’d picked up the ice early — a perfect freeze from Canadian lead Dawn McEwen on her first shot of the game, followed by seven equally perfect shots would produce a game-opening deuce and propel Canada to a 9-4 victory. With the win, Canada improved to 2-0 going into another compelling matchup, against Sweden’s Margaretha Sigfridsson (0-2) at 7 p.m. local (6 a.m. ET) in a rematch of the 2014 Olympic gold-medal game, won by Jones. The Scots dropped to 1-1. “We made a lot of great draws in that end, and drawing was really hard for us in the first game,” said Jones, whose team is rounded out by third Kaitlyn Lawes, second Jill Officer, McEwen, alternate Jennifer Clark-Rouire, team coach Wendy Morgan and national coach Elaine Dagg-Jackson. “We made really precision draws in the first end, and that started us off well and gave us some confidence.” “We made eight great shots in that end, and it’s always nice to make your first draw,” added McEwen. “It gives you a good feel for what’s going on out there, and it set us up for the two.” 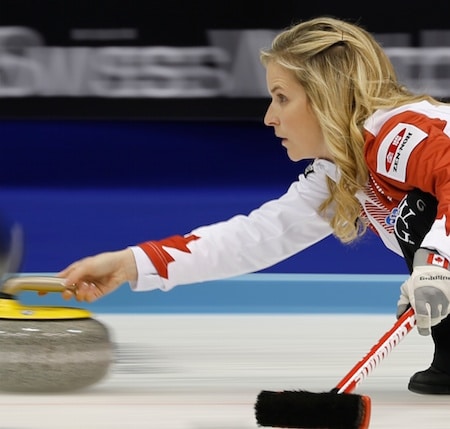 Team Canada skip Jennifer Jones and her team improved to 2-0 with a win over Scotland. (Photo, WCF/Richard Gray)

Canada would add a steal in the second when Muirhead, the 2013 world champ and 2014 Olympic bronze-medallist, threw her last rock away following a perfect Jones draw to the button into a welcoming pocket of rocks. The Scots would rebound with singles in the third and fourth ends, but Canada fought back with deuces in the fifth and seventh ends, and Scotland conceded in the eighth when Muirhead’s last-rock hit attempt rolled too far to give a stolen deuce to the Canadians. “We had a really good talk about the ice last night, and we felt like we had a much better handle on what the ice was going to do today,” said Jones, who’s bidding to give Canada its first world championship gold medal since her 2008 victory at Vernon, B.C. “To be honest, it was better and faster than last night, but regardless, I felt like we had a better plan for it going in. I think Hans (chief ice technician Hans Wuthrich of Gimli, Man.) has the ice going in the right direction, but honestly, we just sat down and said, ‘This is what the ice is going to do. We just have to get really confident with it.’ So we had a better frame of mind coming in.” Through four round-robin draws, Canada is one of four unbeaten teams. China’s Sijia Liu, an 8-4 winner over Aileen Sormunen of the U.S. (0-3), and Switzerland’s Alina Pätz, who downed Germany’s Daniela Driendl 7-3, are setting the pace at 3-0, while Canada and Russia’s Anna Sidorova are both 2-0. Here is the remainder of Canada’s round-robin schedule, with the broadcast plans (all times ET; all games live on TSN network unless otherwise noted): March 15 — vs. Sweden (Margaretha Sigfridsson), 6 a.m. March 15 — vs. China (Sijia Liu), 8 p.m. March 16 — vs. Russia (Anna Sidorova), 6 a.m. March 17 — vs. U.S.A. (Aileen Sormunen), 1 a.m. March 17 — vs. Denmark (Lene Neilsen), 6 a.m. March 17 — vs. Norway (Kristin Moen Skaslien), 8 p.m. (TSN1/4) March 18 — vs. Switzerland (Alina Pätz), 6 a.m. March 18 — vs. Germany (Daniela Driendl), 8 p.m. (TSN1) March 19 — vs. Japan (Ayumi Ogasawara), 1 a.m. For Team Canada updates, go to www.curling.ca. Follow us on Twitter, @curlingcanada. For live scoring, standings and team lineups from the 2015 ZEN-NOH World Women’s Curling Championship, presented by Ford of Canada, go to: https://wwcc2015.curlingevents.com The French version of this story will be posted as soon as possible at https://www.curling.ca/?lang=fr