SAPPORO, Japan — Team Canada ended its opening weekend in Japan on a losing note Sunday night at the Tsukisamu Gymnasium. 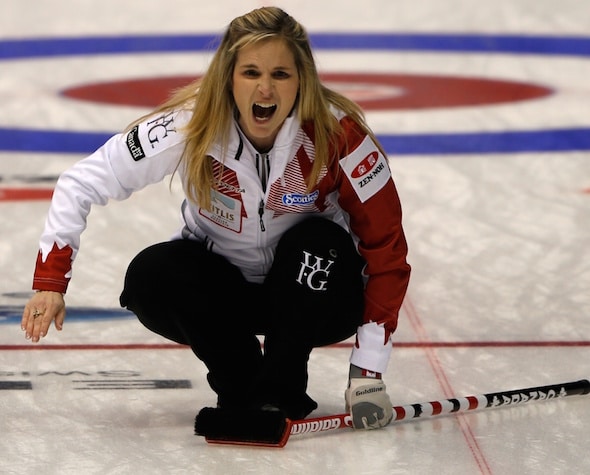 After a pair of wins to open the 2015 ZEN-NOH World Women’s Curling Championship, presented by Ford of Canada, the Jennifer Jones team from Winnipeg bowed 8-6 to previously winless Margaretha Sigfridsson of Sweden. The result left Jones, third Kaitlyn Lawes, second Jill Officer, lead Dawn McEwen, team coach Wendy Morgan and national coach Elaine Dagg-Jackson with a 2-1 record and tied for third place with Finland’s Sanna Puustinen and Japan’s Ayumi Ogasawara in the 12-team round-robin standings, behind unbeaten Sijia Liu of China and Anna Sidorova of Russia — who just happen to be Canada’s opponents on Monday — along with Alina Pätz of Switzerland. The Canadians will look to improve on an inconsistent outing Sunday night that saw them the early goings of the game but falter in the final five. “To be honest, we had a really tough day today (against Scotland and Sweden), so to split the day, we have to be happy with that,” said Jones, whose team downed Scotland’s Eve Muirhead 9-4 earlier on Sunday. “We just didn’t play as well as we would have liked (against Sweden), which was unfortunate.” The Canadians couldn’t have started out any more impressively against Sweden, taking three in the first end when Sweden’s last-rock thrower, Maria Prytz, wrecked on a guard, giving Jones the open draw to score the three. 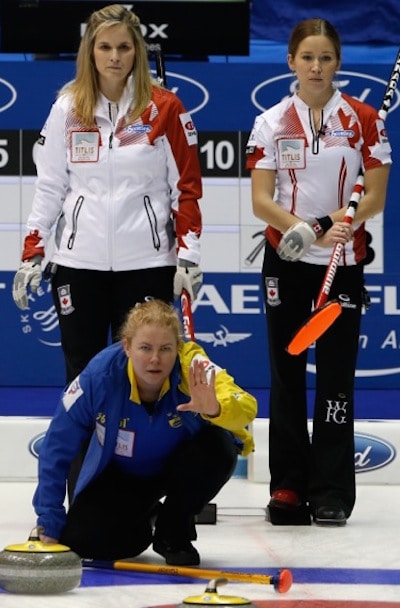 But Sweden rallied quickly, counting a pair in the second end out of nowhere thanks to a jam on Jones’s first shot, and stealing one in the third. The teams traded singles the next three ends, with Jones making a game-saver in the sixth, throwing a bullet through a narrow port and sticking the shooter to bite the button for a clutch single. But after blanking the seventh, the Swedes hit the gas pedal in the eighth, burying two in the four-foot behind a centre guard, and when Jones bounced open with a freeze attempt, Prytz made the tap for the go-ahead three. “I thought we controlled the first part of the game, but had a chance to get another big end in the third and we kind of botched that a little bit and ended up giving up a steal,” said Jones. “I think that turned the game around a little bit.” The game also saw Officer take a pair of tumbles while sweeping in the fifth end — the first of which saw her land heavily on her right leg. “Right now, I don’t feel anything,” she said afterwards. “I suspect tomorrow it could be a different story.” Canada is back on the ice for a pair of games on Monday — against China at 9 a.m. local time (8 p.m. Sunday ET) and Russia at 7 p.m. local (6 a.m. Monday ET). “We knew we would have to be strong from start to finish (on Sunday), and I think we just let it slip away,” said Officer. “We just have to regroup; we had a really good game against Scotland earlier and there were lots of positives we could take away from this game as well.” Here is the remainder of Canada’s round-robin schedule, with the broadcast plans (all times ET; all games live on TSN network unless otherwise noted): March 15 — vs. China (Sijia Liu), 8 p.m. March 16 — vs. Russia (Anna Sidorova), 6 a.m. March 17 — vs. U.S.A. (Aileen Sormunen), 1 a.m. March 17 — vs. Denmark (Lene Neilsen), 6 a.m. March 17 — vs. Norway (Kristin Moen Skaslien), 8 p.m. (TSN1/4) March 18 — vs. Switzerland (Alina Pätz), 6 a.m. March 18 — vs. Germany (Daniela Driendl), 8 p.m. (TSN1) March 19 — vs. Japan (Ayumi Ogasawara), 1 a.m. For Team Canada updates, go to www.curling.ca. Follow us on Twitter, @curlingcanada. For live scoring, standings and team lineups from the 2015 ZEN-NOH World Women’s Curling Championship, presented by Ford of Canada, go to: https://wwcc2015.curlingevents.com The French version of this story will be posted as soon as possible at https://www.curling.ca/?lang=fr