Canadians grind out win over Denmark at Women’s Worlds

SAPPORO, Japan — It was a three-hour grind for Team Canada Tuesday night at the Tsukisamu Gymnasium, but the end result proved worth it. 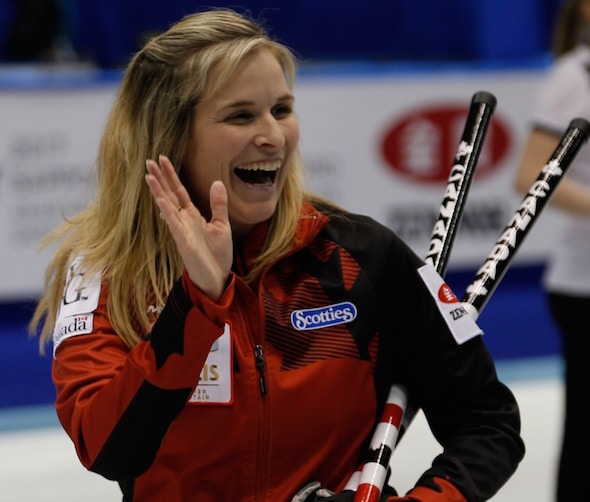 Jennifer Jones and her team from Winnipeg struggled both with some changing ice conditions and a stubborn Danish squad skipped by Lene Neilsen before Jones finally conquered both with a draw to the four-foot in the 10th end for an 8-7 win. The victory meant Jones, third Kaitlyn Lawes, second Jill Officer, lead Dawn McEwen, alternate Jennifer Clark-Rouire, team coach Wendy Morgan and national coach Elaine Dagg-Jackson will head into the stretch run of round-robin play tied for first place in the 12-team round-robin standings with a 7-1 record, tied with Switzerland’s Alina Pätz. And, wouldn’t you know it, Canada and Switzerland will meet on Wednesday at 7 p.m. local time, 6 a.m. Eastern, possibly with a berth in the Page playoff 1-2 game on the line. Before then, Canada will open Wednesday against winless Kristin Moen Skaslien of Norway at 9 a.m. local, 8 p.m. Eastern on Tuesday. “It was a grind from the very beginning, but it’s nice getting games like that,” said McEwen. “It forces you to have to make more precise shots, and winning that way (Jones’s draw) is great. The ice changed and I thought we were really good at believing what it was doing, and we obviously had the right weight for the draw to the button. I wouldn’t want anyone else throwing that shot.” It didn’t come easy against a Danish team that entered the game with a 2-4 record. Denmark counted a go-ahead deuce in the third end to break a 1-1 tie, but Canada came back with three in the fourth thanks to some late-end misses from the Danes. 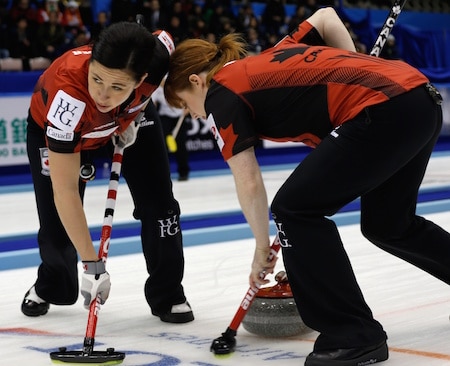 After holding Denmark to one in the fifth, Canada had a glorious opportunity to take control but Jones overcurled on her last rock takeout to score three and settled for a single. Denmark then counted two in the seventh to take the lead but Canada got the deuce back in the eighth thanks to a wonderful hit-and-roll from Lawes, setting the stage for the Jones game-winner in the 10th. “It was definitely a grind,” said Jones. “I had the opportunity for three in the sixth end and I’m not sure what happened to it, but we missed and I really wanted to make it up t the girls. I felt like I let them down there, so it was nice to make that draw to win.” Canada has four games left in the round robin — Norway and Switzerland on Wednesday, then Germany’s Daniela Driendl (4-3) and Japan’s Ayumi Ogasawara (4-3) on Thursday. “It’s always great to be getting near the end of the week but it’s always sad as well because it means the World Championship is coming to a close and we just love every second of wearing the Maple Leaf on our back,” said Jones. “It’ll be a big game against Switzerland to stay up there with the leaders, so we’ll have to come out and play well in the morning against Norway and be tough at night.: Here is the remainder of Canada’s round-robin schedule, with the broadcast plans (all times ET; all games live on TSN network unless otherwise noted): March 17 — vs. Norway (Kristin Moen Skaslien), 8 p.m. (TSN1/4) March 18 — vs. Switzerland (Alina Pätz), 6 a.m. March 18 — vs. Germany (Daniela Driendl), 8 p.m. (TSN1) March 19 — vs. Japan (Ayumi Ogasawara), 1 a.m. For Team Canada updates, go to www.curling.ca. Follow us on Twitter, @curlingcanada. For live scoring, standings and team lineups from the 2015 ZEN-NOH World Women’s Curling Championship, presented by Ford of Canada, go to: https://wwcc2015.curlingevents.com The French version of this story will be posted as soon as possible at https://www.curling.ca/?lang=fr