Team Canada all alone in top spot at Women’s Worlds

SAPPORO, Japan — Team Canada has landed on top of the standings at the 2015 ZEN-NOH World Women’s Curling Championship, presented by Ford of Canada. 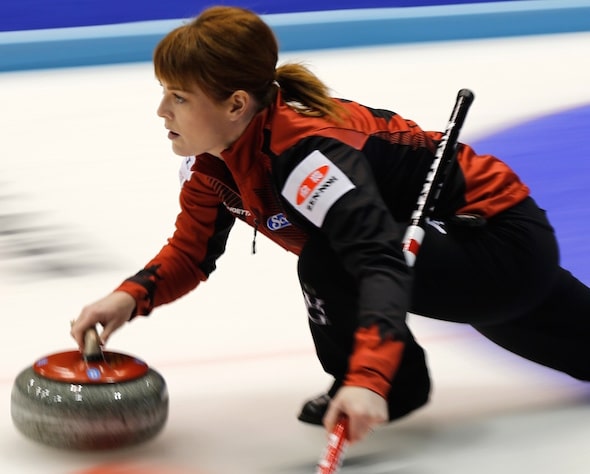 The Jennifer Jones-skipped Canadians took over sole possession of first place in the 12-team round-robin with an emphatic 9-3 win over Norway’s Kristin Skaslien on Wednesday morning at the Tsukisamu Gymnasium, improving to 7-1 and moving one win ahead of Switzerland’s Alina Pätz (6-1), who had the bye on Wednesday morning. Canada will take on the Swiss later Wednesday — 7 p.m. local, 6 a.m. Eastern, in a game that could play a role in deciding a berth in the Page 1-2 playoff game. The Jones Gang — third Kaitlyn Lawes, second Jill Officer, lead Dawn McEwen, alternate Jennifer Clark-Rouire, team coach Wendy Morgan and national coach Elaine Dagg-Jackson round out the team — broke open a tight game with Norway by scoring five in the fifth end when Skaslien jammed on a takeout attempt. The gloves came off following the sixth end when Canada stole a deuce after Skaslien missed on a double-takeout to score a potential pair. 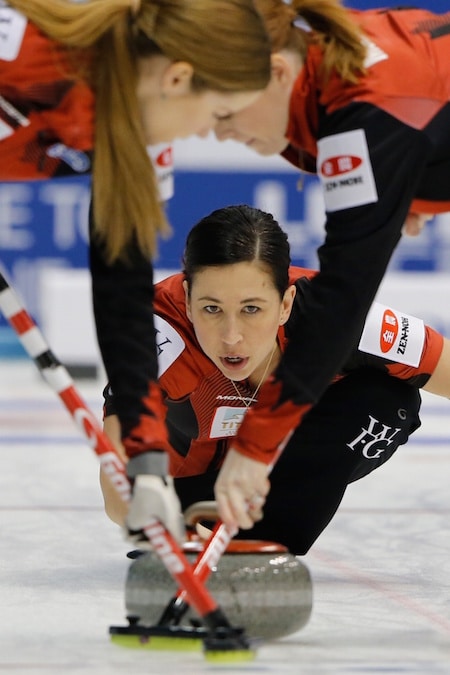 “We were very comfortable on the ice, but they played great,” said Jones, whose miss in the fourth end resulted in Norway stealing a single to go up 3-2. “Their skip made a ton of big shots, but I thought we played well. We had the opportunity in the fourth and I missed it (her last-rock tap attempt overcurled), and I still don’t know how that happened. But we were patient, got a lot of rocks in play in the fifth and made her make a tough shot, and fortunately for us she jammed and gave us that big end.” Now, the Canadians have three round-robin games to play — their night assignment against the Swiss, followed by games Thursday against Germany’s Daniela Driendl (4-3) and Japan’s Ayumi Ogasawara (5-3). “I really like where this team’s at going into these final three games,” said Dagg-Jackson. “You want to be building momentum and building performance over the round-robin. It’s not really necessary to come out with your best st the beginning of the week. You want to get the feel of the event, get a grasp on the ice and build your game around what you can get from the ice, and the last two or three games, they’ve really done that. They’ve utilized the conditions to their advantage, and I think they’re feeling really comfortable.” Jones and Pätz have gone head to head just once — back in late September in Stockholm, Sweden, a 7-4 win for the Canadians. Swiss teams have won two of the past three women’s world championships — Mirjam Ott in 2012 in Lethbridge, Alta., and Binia Feltscher last year at Saint John, N.B. “We know they’re a great team; they’re high on the Order of Merit and obviously they’re playing well,” said Jones. “We just need to come out and do our thing and have a good game, hopefully have a shot to win.” Here is the remainder of Canada’s round-robin schedule, with the broadcast plans (all times ET; all games live on TSN network unless otherwise noted): March 18 — vs. Switzerland (Alina Pätz), 6 a.m. March 18 — vs. Germany (Daniela Driendl), 8 p.m. (TSN1) March 19 — vs. Japan (Ayumi Ogasawara), 1 a.m. For Team Canada updates, go to www.curling.ca. Follow us on Twitter, @curlingcanada. For live scoring, standings and team lineups from the 2015 ZEN-NOH World Women’s Curling Championship, presented by Ford of Canada, go to: https://wwcc2015.curlingevents.com The French version of this story will be posted as soon as possible at https://www.curling.ca/?lang=fr