SAPPORO, Japan — There will be some more work to do for Team Canada to nail down a playoff berth at the 2015 ZEN-NOH World Women’s Curling Championship, presented by Ford of Canada. 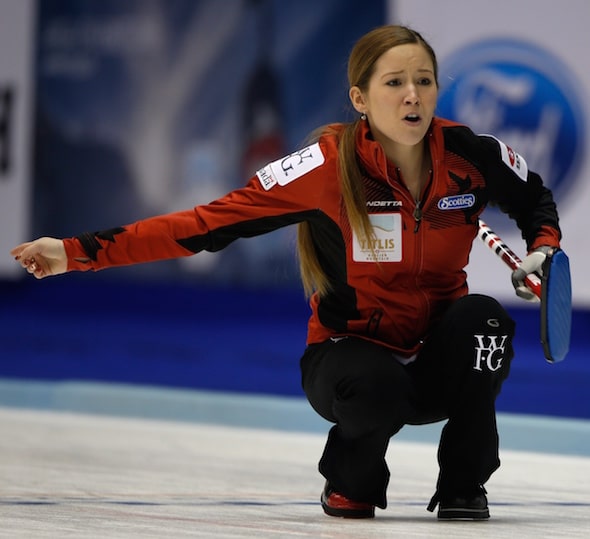 Jennifer Jones’s team from Winnipeg — third Kaitlyn Lawes, second Jill Officer, lead Dawn McEwen, alternate Jennifer Clark-Rouire, team coach Wendy Morgan and national coach Elaine Dagg-Jackson — saw its five-game win streak snapped Wednesday night at the Tsukisama Gymnasium in a battle of the front-runners in the 12-team round robin. Switzerland’s Alina Pätz, bidding to become the third Swiss skip to win World Championship gold in four years, never trailed in rolling up a 7-6 win over Team Canada. With the win, the Swiss assured itself of no worse than a tiebreaker scenario with an 8-1 record — good enough for sole possession of first place. Canada, meanwhile, dropped to 7-2 and will complete round-robin play on Thursday with games against Germany’s Daniela Driendl  (4-5) and Japan’s Ayumi Ogasawara (5-4). A win in either of those games would give Canada a playoff berth in a bid to claim a World Championship gold medal for the first time since Jones’s 2008 triumph in Vernon, B.C. 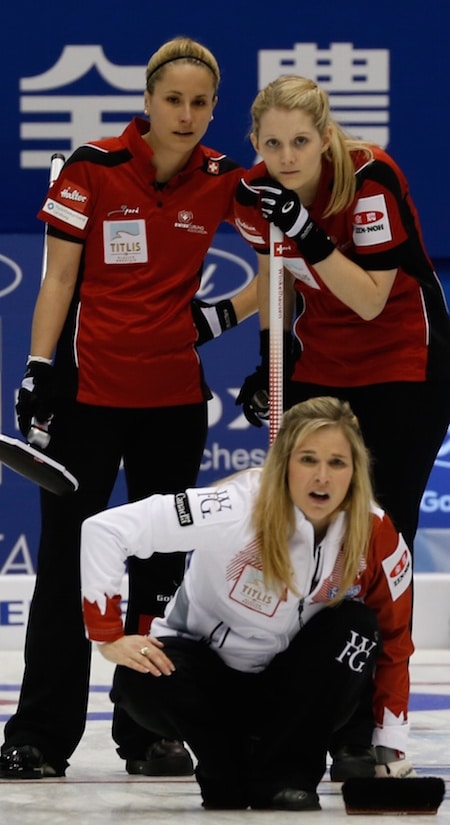 “I think we just didn’t have the start we wanted and we kind of had to battle back,” said Officer of Wednesday night’s loss. “We certainly had some opportunities in the last couple ends, but it just didn’t work out for us today. We’ll have to win out tomorrow and hopefully that does good things for us.” Pätz set the tone early, making two perfect shots in the first end to thwart what looked to be setting up as a Canadian steal; instead, Switzerland would escape with a deuce, and would steal one an end later, again thanks to precision draws from the Swiss skip. The Canadians would rally to tie it with deuces in the third and fifth ends sandwiched around a Swiss single, but Switzerland would retake the lead for good in the seventh; Jones had back-to-back chances to get out of the end with a double takeout, but barely missed on both, leaving Pätz with the draw for the deuce. “She (Pätz) played great and you can’t take that away from her, and we missed a couple of key opportunities to maybe take some extra points,” said Jones. “Hopefully we’ll have another chance to play them. It’s a tough loss to take this late in the week, but we have another opportunity tomorrow to win two and have ourselves in a really good position for the playoffs.” “It was really important for us,” said Pätz, competing in her first World Women’s Championship, but a former gold-medallist at the World Mixed Doubles Championship. “We played really well and we had to play really well to beat them it’s always a pleasure to beat the Olympic champions. I felt really comfortable, we started really well and that made us self-confident and I think that was a key point for us.” Canada will look to restore its momentum on Thursday, knowing that two wins will place the team in Friday’s Page playoff 1-2 game. “It’s all you ever want, to have destiny in your own hands,” said Jones. “We know that we have to come out and win both tomorrow, and we’ll find ourselves in a  really good spot. It was a big loss tonight, but that usually makes us play a little bit better.” Round-robin play will wrap up on Thursday, with the top four teams advancing to the Page playoffs, which see the first-and-second place teams playing Friday for a berth in Sunday’s gold-medal game (4 a.m. ET). The loser of the one-two game drops to the semifinal (Saturday, 4 a.m. ET) against the winner of the Page 3-4 game. The semifinal loser and Page three-four loser will play for the bronze medal on Saturday at 10 p.m. ET. Here is the remainder of Canada’s round-robin schedule, with the broadcast plans (all times ET; all games live on TSN network unless otherwise noted): March 18 — vs. Germany (Daniela Driendl), 8 p.m. (TSN1) March 19 — vs. Japan (Ayumi Ogasawara), 1 a.m. For Team Canada updates, go to www.curling.ca. Follow us on Twitter, @curlingcanada. For live scoring, standings and team lineups from the 2015 ZEN-NOH World Women’s Curling Championship, presented by Ford of Canada, go to: https://wwcc2015.curlingevents.com The French version of this story will be posted as soon as possible at https://www.curling.ca/?lang=fr