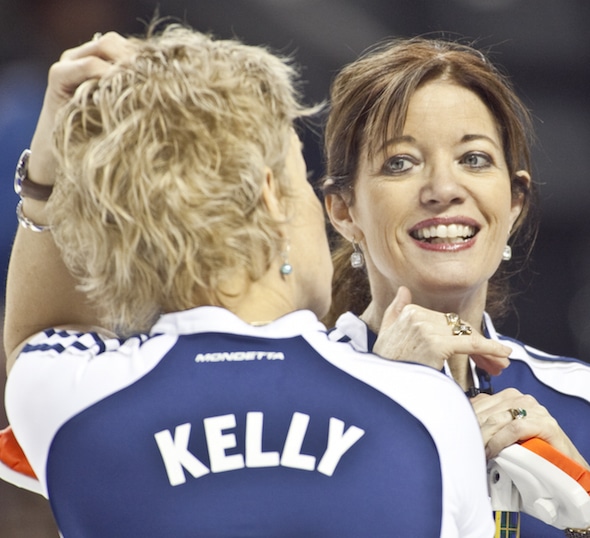 Fourteen men’s teams and 13 women’s teams (Yukon did not enter a team) will compete in the Canadian Seniors, which take place March 21-28 at the Thistle Curling Club. Unlike the previous three years, when a pre-qualifying event was held to determine which two teams of gender advanced to the main draw, this year’s renewal will see all the teams seeded into two pools per gender to first play a round robin within their pool. In men’s, the top four in each pool advance to the Championship Round for games against the teams from the opposite pool, while the bottom three in each go to the Seeding Pool. In women’s, the top four in each pool advance to the Championship Round for games against the teams from the opposite pool, while the bottom three in Pool A join the bottom two in Pool B for a round robin within the Seeding Pool. At the conclusion of the Championship Round on Friday, the semifinals will be held Saturday morning, March 28 at 9:30 a.m. MT, pairing 1 vs. 4 and 2 vs. 3. The winners then advance to their respective gold-medal finals at 2:30 p.m. while the losers meet in bronze-medal games at the same time. Topping the women’s field is six-time Canadian and two-time world champion Colleen Jones of Halifax, who will try to become just the second curler, joining British Columbia’s Pat Sanders, to skip her team to victory at the Scotties, Worlds and Canadian Seniors. This will be Jones’s third crack at the Seniors, after competing in 2011 and 2012. She’s joined by long-time teammates Kim Kelly at third and Nancy Delahunt at lead, with Mary Sue Radford now at second. In 2012, Delahunt skipped the Nova Scotia entry to a bronze medal. Other skips with Scotties experience include Newfoundland and Labrador’s Laura Phillips, British Columbia’s Sandra Jenkins and Debbie Moss of the Northwest Territories. In men’s, Northern Ontario’s Al Hackner and New Brunswick’s Wayne Tallon top the lineup. Hackner won Brier and world men’s titles in 1982 and 1985 and the 2006 Canadian Seniors. He was also a silver medallist at the 2007 World Seniors. Joining the ‘Ice Man’ are Eric Harnden, Frank Morissette and Rob Thomas. Tallon, another Brier veteran who earned a silver medal at the 2000 Brier in Saskatoon when playing third for Russ Howard, won the 2013 Canadian Seniors at Summerside, P.E.I, then earned a gold medal at the 2014 World Seniors at Dumfries, Scotland, going through undefeated with an 11-0 mark. Skipping but throwing third rocks, he returns with the same team – Mike Kennedy at third (fourth rocks), Mike Flannery at second and Wade Blanchard at lead. Other skips with Brier experience include Newfoundland and Labrador’s Gary Oke, Prince Edward Island’s Rod MacDonald, Quebec’s Ted Butler (along with third Don Westphal) and Saskatchewan’s Glen Despins. The Canadian Senior Men’s Championship began in 1965 in Port Arthur, Ont. Since then, Manitoba has won a leading 11 titles, Ontario is next with 10 while Alberta has eight. The Canadian Senior Women’s Championship began in 1973 in Ottawa. Ontario has won a leading 10 crowns, followed by British Columbia with eight and Alberta with six. The championships were conducted separately until being combined in 1985 at Yorkton, Sask. The winners of the 2015 Canadian Seniors will represent Canada at the 2016 World Senior Curling Championships, at a site and date to be announced by the World Curling Federation. Last year’s Canadian champions, skipped by Alan O’Leary of Nova Scotia and Lois Fowler of Manitoba, will be competing in this year’s World Seniors, April 18-25 at Sochi, Russia. Since the World Seniors began in 2002, Canada has won nine men’s and nine women’s titles. Draw results for the 2015 Canadian Seniors will be instantly available at www.curling.ca. For event information, visit https://www.curling.ca/2015seniors. This is the first year of a three-year agreement by Everest, the first nationwide funeral planning and concierge service, to be the title sponsor of the Canadian Seniors.