Canadians to join World Curling Hall of Fame in Halifax

There will be a bumper crop of Canadians being added to the World Curling Hall of Fame during ceremonies next month at the Ford World Men’s Curling Championship in Halifax, it was announced today by the World Curling Federation. 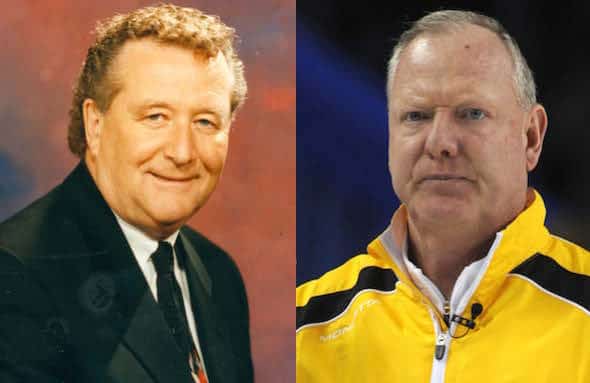 Ray Turnbull, left, and Russ Howard are being inducted into the World Curling Hall of Fame.

2015 inductees Russ Howard of Moncton, N.B., and Ray Turnbull of Winnipeg will be honoured in Halifax, as will 2014 inductee Randy Ferbey of Edmonton. “It really is wonderful to see these three men honoured for what they’ve accomplished, both on and off the ice,” said Greg Stremlaw, Chief Executive Officer of Curling Canada. “Canada has taken a leadership role over the years in raising the profile of curling, both in our country and around the world, and Russ, Ray and Randy all played a significant role and should be congratulated for their induction to the World Curling Hall of Fame.” 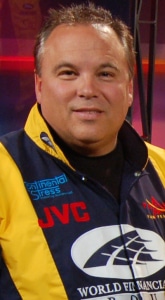 Randy Ferbey will formally inducted into the World Curling Hall of Fame during a ceremony in Halifax.

Howard already is a member of numerous Halls of Fame, including Curling Canada’s, the Canadian Sports Hall of Fame, and the New Brunswick and Ontario Sports Halls of Fame. He won Olympic gold skipping Team Canada and throwing second rocks in 2006 at Torino, Italy, in addition to capturing Brier and world curling championships in 1987 and 1993. He played in 14 Briers, skipping teams from both Ontario and New Brunswick. Howard also played a role in revolutionizing the way the game is played. The current four-rock Free Guard Zone rule can be traced to Howard’s so-called Moncton Rule, which was introduced at a bonspiel in his hometown in 1990, but was used previous to that during practice sessions for Howard’s teams that were designed to get used to playing with more rocks in play. Today, he works as a commentator for TSN and is an ambassador for the game around the world. “Curling has given me so many opportunities over the years, for which I will always be thankful,” said Howard, who is working this week for TSN at the 2015 ZEN-NOH World Women’s Championship in Sapporo, Japan. “I consider myself blessed that I’ve had these opportunities to play the game I love and be rewarded so richly for it, and I’m truly appreciative to the World Curling Federation for this honour, and to Curling Canada for its support over the years.“ Turnbull first broke onto the Canadian curling scene with the teenaged Terry Braunstein team that pushed Alberta’s Matt Baldwin to a sudden-death final at the 1958 Brier before losing, and prompting the Canadian Curling Association to create a junior-age national championship and keeping teenaged players out of the Brier. Turnbull would return to, and win, the Brier in 1965 at Saskatoon, throwing lead rocks for Braunstein. During his years as a player, he was developing teaching techniques and was among the first to offer formal instruction for players and coaches, both in Canada and around the world, in addition to his work as an official. As his playing and coaching days were coming to an end, he moved into the broadcast booth with TSN in 1985 and stayed there through 2010, becoming one of the sport’s most familiar and trusted voices. “I’ve always thought I was extremely lucky to have been able to make a living from this wonderful sport that has given so much pleasure to people around the world,” said Turnbull. “There are so many friends, teammates and family members who’ve helped me to get here, and I’m sharing this honour with all of them.” Ferbey was named to the World Curling Hall of Fame last year, but deferred his official induction ceremony until the 2015 Ford Worlds in Halifax. His six Brier Canadian men’s championships — 1988 and 1989 as the third for Pat Ryan’s team, then 2001, 2002, 2003 and 2005 throwing third rocks and skipping the legendary Ferbey Four with teammates David Nedohin, Scott Pfeifer and Marcel Rocque — are a record, while he shares the record for most Brier wins as a skip (four) with Ernie Richardson and Kevin Martin. Ferbey also won world championships in 1989, 2002, 2003 and 2005. Also joining the World Curling Hall of Fame this year is Japan’s Hiroyuki Saio, a former member of the WCF Executive Board who played a significant role in developing curling in Asia. It’s the fourth year the World Curling Federation has accepted nominations for induction into the Hall of Fame, which is described as “the highest ‘non-playing’ honour that the World Curling Federation can bestow on someone and recognizes outstanding contribution to the sport of curling whether through on ice exploits or off ice endeavours.” Prior to 2012, the WCF awarded the World Curling Freytag Award, named after the late Elmer Freytag of the U.S. Curling Association, who was a founding member of the International Curling Federation (now the WCF). Previous Canadian Freytag honourees were: Ray Kingsmith (2011), Sandra Schmirler (2009), Shirley Morash (2001), Ernie Richardson (2000), Colin Campbell (1990), Bob Picken (1987), Don McLeod (1985), Mabel Deware (1983), Doug Maxwell (1981) and Ken Watson (1978). For more information on the World Curling Hall of Fame, go to: www.worldcurling.org/world-curling-hall-of-fame.