The 2015 CIS-Curling Canada University Curling Championships got underway Wednesday at the K-W Granite Club in Waterloo, Ont. All 16 teams on both the men’s and women’s side were on the ice for their first two draws of the tournament. In men’s action, the story of the day was the four unbeaten teams sitting atop the standings after two draws. The host Wilfrid Laurier Golden Hawks, along with the Alberta Golden Bears, the Saint Mary’s Huskies and the Toronto Varsity Blues all own 2-0 records through day one. 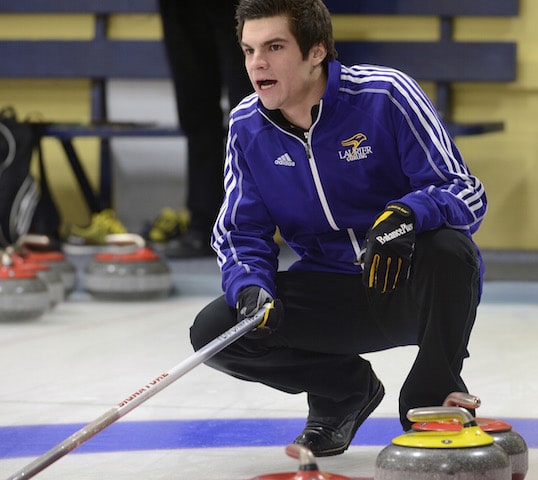 The Golden Hawks, the OUA Champions skipped by Aaron Squires, got off to a quick start thanks to wins over the Dalhousie Tigers (12-4) and the UNB Varsity Reds (10-3). Multiple score steals were the difference makers for Squires and his squad as Laurier took control of their win over Dalhousie with a steal of three in the seventh end and a steal of two in the fourth against UNB. Alberta and skip Thomas Scoffin followed suit with victories over the Western Mustangs (9-4) and the Winnipeg Wesmen (8-4) where, once again, late steals were the keys to victory. Scoffin and his rink earned consecutive steals of two in the seventh and eighth ends to induce handshakes against Western, while a steal of one in the ninth end, and another three in the tenth end, gave Alberta the win over their Western Canada counterparts from Winnipeg. The Huskies, silver medalists in the AUS and skipped by Scott Babin, also picked up their two wins against Western (6-3) and Winnipeg (8-6). Saint Mary’s opened up the day by rallying from a 6-4 deficit after seven ends to earn the win over the Wesmen before dispatching of the Mustangs to move to 2-0. Finally, the Varsity Blues, the OUA bronze medalists led by Evan Lilly, earned identical 6-4 wins over UNB and Dalhousie. Against the Varsity Reds, the Blues scored two in the ninth end before running UNB out of rocks in the tenth to open their day with a win. They followed that up by jumping out to an early 6-1 lead before cruising over the final four ends to out with the victory. On the women’s side, it is the Guelph Gryphons, Thompson Rivers Wolfpack and the host Wilfrid Laurier Golden Hawks who sit atop the standings after day one. Guelph’s Katelyn Wasylkiw and her rink, who captured the OUA bronze medal, defeated Saint Mary’s 7-4 before easily handling Ashley Francis and her St. Francis Xavier squad 9-2 to close out the day. 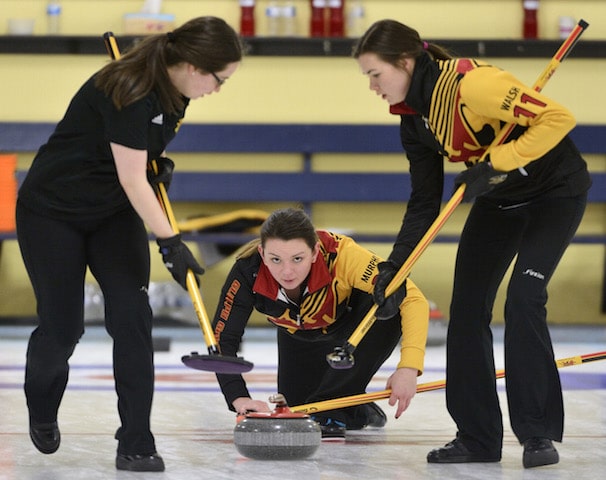 Thompson Rivers preserved their spot at the top of the standings by pulling out a victory on a steal in the final end against Kelsey Rocque and her Alberta Pandas rink. Rocque, the two-time World and Canadian Junior champion, flashed on her last rock to give up a steal of one, giving the 2014 Canada West champions a 6-5 win. Their other victory of the day came against the UPEI Panthers (6-4). Similar to Thompson Rivers, Laurier’s second win of the day was reassured by a steal in the final end against Saint Mary’s. The AUS champions tried to go for three and the win on the final shot, but skip Sara Spafford was wide on her last, giving the OUA champions, skipped by Carly Howard, the steal and the victory. The women will begin day two of the championships at 8 a.m. Thursday morning before the men take the ice at 12 p.m. Live updates can be found at www.curling.ca. Fans can experience shot-by-shot analysis of games throughout the day at www.curlinggeek.com.