Canada gets a shot at gold at Women’s Worlds

SAPPORO, Japan — Gold is now within reach for Team Canada at the  2015 ZEN-NOH World Women’s Curling Championship, presented by Ford of Canada. 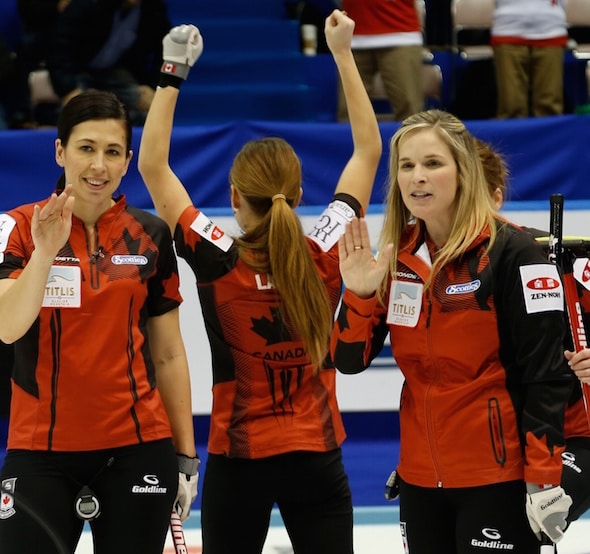 A 7-4 win over Russia’s Anna Sidorova on Saturday evening at the Tsukisamu Gymnasium in the semifinal has landed skip Jennifer Jones, third Kaitlyn Lawes, second Jill Officer, lead Dawn McEwen, alternate Jennifer Clark-Rouire, team coach Wendy Morgan and national coach Elaine Dagg-Jackson in Sunday’s gold-medal game against Switzerland’s Alina Pätz at 3 p.m. local time, 2 a.m. Eastern. Jones was on fire in the semifinal, throwing four double-takeouts along the way to lead her team into the gold-medal game after losing to the Swiss in the Page playoff 1-2 game earlier on Saturday.Switzerland has defeated Canada twice at these Women’s Worlds — 7-6 in the round robin on Wednesday evening and 6-4 in the Page playoff 1-2 game earlier on Saturday. “It’s sweet to see; it’s awesome to sweep those and awesome to see those rocks go out of the ice,” said Officer, who, along with Jones and McEwen, were members of the most recent Canadian team to win gold at the Women’s Worlds, in 2008 at Vernon, B.C. “We had some lunch (after the earlier loss), had a rest and then we all came out firing. And obviously, she was here to play today, which was awesome. We came out on a mission, and we had to to build some confidence as a team to go into the game tomorrow.” The Canadians shook off the disappointment of the loss to Switzerland in a hurry against the Russians. Canada came out of the gates blazing in the first end, scoring a deuce on a Jones double takeout. 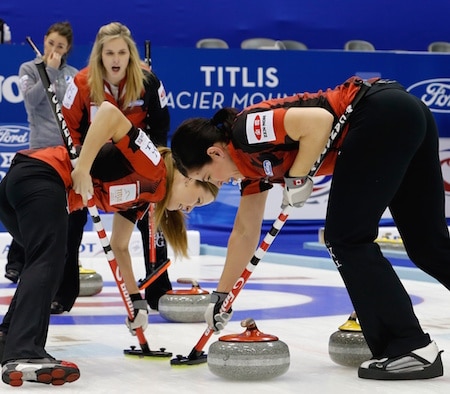 Canada would pad its lead with a stolen single in the second when Sidorova’s runback double-takeout attempt jammed, and after Russia finally hit the scoreboard with one in the third, Canada added two more points in the fourth on Jones’s cold draw to the four-foot. Unlike the Swiss game earlier, Canada dictated most ends and had the Russians in chase mode for most of the game, and the tone was set early. “Honestly, the biggest shot of the game was probably the double in the first end because we we hadn’t scored a two in the morning game, and we were chasing a little bit in the first end (against Russia) and we found a way to get our deuce,” said Jones. “I think that changed the whole tone of that game. The girls played awesome; I could see we were going to come out fighting in this game. We were determined, and we wanted the opportunity to play in that gold-medal game. We showed spark and fire, perseverance and desire.” Russia will play Scotland’s Eve Muirhead in the bronze-medal game Sunday at 9 a.m. local time. The Canadians, meanwhile, will play a Swiss team that is in pursuit of that country’s third world title in four years, following on the heels of Mirjam Ott in 2012 at Lethbridge, Alta., and Binia Feltscher last year in Saint John, N.B. Switzerland has defeated Canada twice at these Women’s Worlds — 7-6 in the round robin on Wednesday evening and 6-4 in the Page playoff 1-2 game. “I think it comes down to execution,” said Jones. “I had two shots for two in that game and missed them, and you can’t afford to do that in a gold-medal game. We have to put some pressure on them, make some really key draws and try to make their shots hard. If we do that, and leave it all on the ice, hopefully we’ll have a shot at the win, but at least we won’t have any regrets.” The semifinal win means Canada is assured of a sixth straight podium finish at the Women’s Worlds, and will take aim a leading 16th gold medal (Sweden is next best with eight). “Finals are great; that’s what you play a sport for, those adrenalin rushes that go with a final,” said Jones. “What I love about our team is that we never give up; we came out here and showed grit and determination — I’m so proud to play with these girls.” For Team Canada updates, go to www.curling.ca. Follow us on Twitter, @curlingcanada. For live scoring, standings and team lineups from the 2015 ZEN-NOH World Women’s Curling Championship, presented by Ford of Canada, go to: https://wwcc2015.curlingevents.com The French version of this story will be posted as soon as possible at https://www.curling.ca/?lang=fr