SAPPORO, Japan — Team Canada’s journey to the gold-medal game at the 2015 ZEN-NOH World Women’s Curling Championship, presented by Ford of Canada, will take a little longer than hoped for. 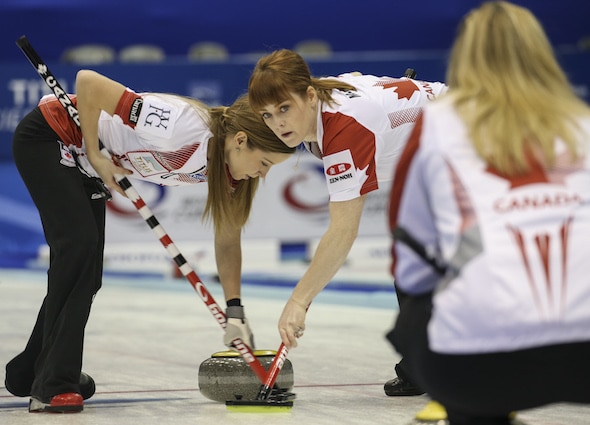 The winner will take on the Swiss in Sunday’s gold-medal game (3 p.m. local, 2 a.m. Eastern) while the loser will play Scotland’s Eve Muirhead for the bronze medal Sunday at 9 a.m. local, 8 p.m. Saturday Eastern. “Pretty disappointed,” admitted Jones. “We didn’t come out and play as well as we would have liked in the first half of that game. But we made a couple big shots when we had to, and we’ll just have to be a little sharper (against Russia) and hopefully we’ll have another opportunity tomorrow.” Like she did in the round-robin game, Pätz’s team opened with a first-end deuce; she made a short runback raise takeout for the pair, and the Swiss would never trail from then on, despite the potential distraction by a stubborn butterfly. Canada couldn’t manufacture a deuce against Switzerland; the best chance may have been in the fifth end when Jones was heavy with her last-rock draw-tap, and was left only with a single point. But the Canadians did manage to tie it in the eighth end thanks to back-to-back single points — the latter thanks to Jones’s lovely draw that left Pätz with an extremely tough double takeout. But the Swiss came back with a clutch deuce in the ninth, and Pätz finished the game off in the 10th with a double takeout. “We just couldn’t get our draws in the right spots, and that’s the thing we’re going to have to figure out before tonight,” said Jones. “The draw I missed in the fifth was a big opportunity for a (second) point. We’ll just fight our way through now and see if we can find our way to the final.” Switzerland is looking for its third World Women’s title in four years after Mirjam Ott’s victory in Lethbridge, Alta., in 2012 and Binia Feltscher’s win last year in Saint John, N.B. “It’s crazy,” marvelled Pätz, who won the 2011 World Mixed Doubles title with Sven Michel “It was always the dream to be there and now we’re there. We don’t really have a secret, maybe it’s (coach) Al Moore? I really don’t know. We just have a lot of teams in Switzerland that make the other teams better.” For Team Canada updates, go to www.curling.ca. Follow us on Twitter, @curlingcanada. For live scoring, standings and team lineups from the 2015 ZEN-NOH World Women’s Curling Championship, presented by Ford of Canada, go to: https://wwcc2015.curlingevents.com The French version of this story will be posted as soon as possible at https://www.curling.ca/?lang=fr