Niklas Edin and his Swedish teammates had to overcome their own mistakes and get a last-rock draw in the 10th end to score two and get past a stubborn Finnish team 6-5 in Saturday afternoon’s opening draw at the 2015 Ford World Men’s Curling Championship in Halifax.

Finnish skip Aku Kauste tried for a tight double takeout with his final stone but got only one Swedish counter, leaving Edin the draw for the win. In other first-round games Yusuke Morozumi of Japan scored two in the first end and stole two more in the second to beat Evgeny Arkhipov of Russia 7-4, Marc Pfister of Switzerland made a final-rock draw for one in an extra end to nip Jiří Snítil of the Czech Republic 6-5 and Ewan MacDonald of Scotland came up short with his final-rock draw to allow Joel Retornaz of Italy to steal one for a 6-5 extra-end win. Edin, third Oscar Eriksson, second Kristian Lindström, lead Christoffer Sundgren and alternate Henrik Leek, had their hands full with Finland but in the end the Swedes made the right decision in the final end. “We had an option there,” Edin said of his first rock. “We could have scored four if we had to, by coming around that centre guard, which is a fairly easy shot. But that was the biggest chance for them to steal so we decided to peel the guard. He was pretty close to making that double even though it was really tough. Good effort but them but we got the situation we wanted.” Although it took Edin’s final stone, it was a raise triple by Lindstrom that cleared the house of Finnish rocks and enabled Sweden to build the end its way. “That was really important,” Edin said of the shot. “That’s the way we’ve played pretty much all year, that’s our strength. We didn’t really get to that earlier in the game so we needed to keep some rocks in play. Put up two corner guards and if they ever put an angle on them we had good chance to make a double and keep three guards in play and that will give us a really good chance at two. The triple was a bonus, the really important thing was to stick the shooter in play.” In the other key game the Italian foursome of Retornaz, third Amos Mosaner, second Daniele Ferrazza, lead Andrea Pilzer and alternate Sebastiano Arman battled the veteran Scottish team shot-for-shot before finally emerging victorious. 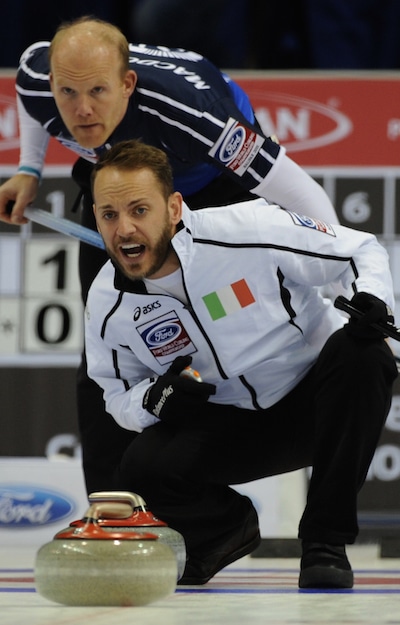 MacDonald got singles in the first two ends but Italy responded with a singles in the next three ends before Scotland got a deuce in six. The teams traded singles in the eighth, ninth and 10th ends and Scotland had the advantage in the 11th with the hammer. “Ewan missed his last shot but we put him in a position to miss it,” said Retornaz. “We built up a good situation in the extra end and Amos played two fantastic draws with his last stones. It was a tough shot for Ewan — he usually makes them but this time he missed it so we were lucky in the end.” Canada’s Pat Simmons, John Shuster of the U.S., Norway’s Thomas Ulsrud and China’s Jialang Zang had byes on Saturday afternoon. The 2015 Ford Worlds continue on Saturday, with a draw scheduled for 7:30 p.m (all times Atlantic). All Canadian games and the playoff rounds for the 2015 Ford World Men’s Curling Championship will be televised on TSN/RDS2, the official broadcasting partner of the Season of Champions. The full broadcast schedule is available at https://www.tsn.ca/2014-15-tsn-curling-broadcast-schedule-1.95515. Live scoring is available at: https://www.curling.ca/scoreboard/#/competitions/1670-2015-ford-world-men-s-curling-championship/scoreboard To purchase tickets to the 2015 Ford World Men’s Curling Championship, go to: https://www.curling.ca/2015worldmen-en/tickets/ The French version of this story will be available at https://www.curling.ca/2015worldmen-fr/ as soon as possible.