Prairie provinces stood tall on the medal podium on Saturday afternoon at the Thistle Club in Edmonton. 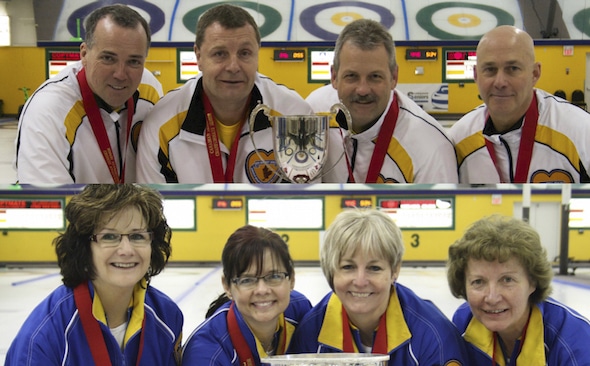 The host province Alberta, skipped by Calgary’s Terri Loblaw, and Manitoba’s Randy Neufeld (La Salle) captured the gold medals at the 2015 Everest Canadian Senior Men’s and Women’s Curling Championships. Loblaw hit for a game-winning deuce in the eighth end to defeat six-time Scotties Tournament of Hearts champion Colleen Jones of Nova Scotia 7-5, while in the men’s final, a second-end deuce proved pivotal in Manitoba’s 5-3 web over Quebec’s Ted Butler (Buckingham). Both gold-medallists will represent Canada at the 2016 World Senior Curling Championships (site and dates to be announced by the World Curling Federation). Loblaw’s team — third Judy Pendergast, second Sandy Bell and lead Cheryl Meek — reached the final by knocking off top-seeded Cathy Inglis of Saskatchewan 9-3 in the Saturday morning semifinal. That set the tone to take on the Jones Gang of Halifax, a 5-4 extra-end winner over B.C.’s Sandra Jenkins in the other semi. “The team played really well in the semifinal,” said Loblaw, who was playing at her first national championship. “And any time you play against Colleen, well, she’s tough. I’ve never played her before, and obviously with all her records, it was definitely a nice win. We just tried to keep it as clean as we could.” It was Alberta’s seventh Canadian senior women’s championship, and first Alberta’s Cathy King prevailed in 2012 before going on to win the 2013 world senior women’s title. “Oh, we’re absolutely ecstatic, for sure,” said Loblaw. “Never thought it would happen, but it’s nice to be here. We hoped to be competitive, so this means the world. And going to the worlds is going to be phenomenal. I’m just at a loss for words right now.” The Neufeld team — third Dean Moxham, second Peter Nicholls and lead Dale Michie — never trailed against Quebec, setting the tone early with the deuce. Neufeld took down 2013 Canadian/2014 world champ Wayne Tallon of New Brunswick (Fredericton) 6-4 in one semifinal, while Quebec was a 6-2 victor over Alberta’s Glen Hansen (Hinton) in the other. “It’s crazy. Winning Manitoba was enough already,” marvelled Neufeld. “Lots of emotions, that’s for sure. You don’t expect it.” The early deuce was a factor, conceded Neufeld, but it was a single point in the fourth that may have made the biggest difference. “It was looking like we were going to get a bunch and we just didn’t get my first shot in a good place,” he said. “Then, he (Butler) made a pistol, froze into a bunch. We thought we were going to get four or five and ended up only getting one, but it was a really good character-builder.” Manitoba claimed its leading 13th Canadian senior men’s championship, and first since Kelly Robertson won in 2011 (he won silver at the 2012 world seniors). In the bronze-medal games, B.C. stole one in the eighth end for a 7-6 win over Saskatchewan in the women’s game, while New Brunswick stole singles in the eighth and ninth ends to defeat Alberta 6-5. The 2016 Everest Canadian Seniors are scheduled for March 19 to 26 in Digby, N.S. Nova Scotia’s Alan O’Leary and Manitoba’s Lois Fowler will represent Canada at the 2015 World Seniors, April 18-25 in Sochi, Russia.