The game may have been less entertaining for the fans than their Saturday night shootout with the U.S., but Canadian skip Pat Simmons was a lot more entertained with his team’s more traditional 7-4 win over China in Sunday’s fourth draw of the Ford World Men’s Curling Championship at the Scotiabank Centre in Halifax.

“I think it was way more entertaining from my end,” Simmons said after Canada’s second straight win in a game that turned in the middle ends. “We were a little sharper, cleaned up some things a bit and caught on to the ice and played pretty well, especially the second half of the game.” Jialiang Zang of China struck first with two in the second end but Simmons, third John Morris, second Carter Rycroft, lead Nolan Thiessen and alternate Thomas Sallows responded with two in the third, then stole a single in fourth. They took control with two in the fifth when Simmons executed a game-changing triple raise, with triple angles, to kick out China’s shot rock and leave himself sitting three. “That turned out well,” he understated. “We weren’t thinking we could make it that good, actually. There was enough separation between the rocks that it kind of did the opposite of what we thought it was going to do. We thought we might be able to pick their shot rock off and leave them an easy tap for one but as it turned out it couldn’t have been better.” In the other fourth draw games, Jiří Snítil of the Czech Republic scored three in the eighth end to hand Yusuke Morozumi of Japan his first loss, 8-6; Thomas Ulsrud of Norway came up light with his final stone to allow John Shuster of the U.S. to score three in an extra end for a 10-7 win; and Aku Kauste of Finland made a soft angle raise tapback for three and a 10-7 win over Ewan MacDonald of Scotland. Even inserting former world champion skip David Murdoch into the lineup wasn’t enough for Scotland to end its losing streak. With MacDonald continuing to struggle Scotland gave up single steals in the second and fifth ends and a costly three in the fourth. MacDonald, curling just 65 per cent going into the game, was narrow on a soft double attempt with his last rock in four, leaving Kauste an easy draw for three. Finland led 6-2 after five end but the Scots fought back with deuces in the sixth and eighth ends and a steal of one in 10 to tie the game 7-7. But Kauste made a last-rock, angle-raise tap back to get three in 11th for the win. 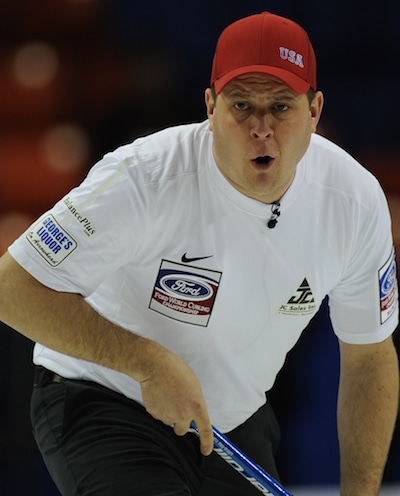 “Finally, a win.” Kauste said. “It’s really big. Yesterday we didn’t play really well and lost by one point to Sweden and one point to Czechs and I thought we should be playing a lot better. Today we did and we finally got the win.” Italy’s Joel Retornaz (2-0), Russia’s Evgeny Arkhipov (1-1), Niklas Edin of Sweden (1-1) and Marc Pfister of Switzerland (1-1) had byes in the afternoon. The 2015 Ford Worlds continue on Sunday with the final draw at 7:30 p.m AT. All Canadian games and the playoff rounds for the 2015 Ford World Men’s Curling Championship will be televised on TSN/RDS2, the official broadcasting partner of the Season of Champions. The full broadcast schedule is available at https://www.tsn.ca/2014-15-tsn-curling-broadcast-schedule-1.95515. Live scoring is available at: https://www.curling.ca/scoreboard/#/competitions/1670-2015-ford-world-men-s-curling-championship/scoreboard To purchase tickets to the 2015 Ford World Men’s Curling Championship, go to: https://www.curling.ca/2015worldmen-en/tickets/ The French version of this story will be available at https://www.curling.ca/2015worldmen-fr/ as soon as possible.