Curling really is a game of inches at times. It was those tiny measurements that opened the door early and propelled Canada and Norway to victories Monday morning in the sixth draw of the 2015 Ford World Men’s Curling Championship.

Pat Simmons and Canada scored four in the second end and rolled to an 11-2 six-end win over Jiří Snítil of the Czech Republic while Thomas Ulsrud of Norway scored a record-tying six points in the second and went on to beat Ewan MacDonald of Scotland 11-6. In the two other morning games, Aku Kauste of Finland beat John Shuster of the U.S. 7-4 and Yusuke Morozumi of Japan scored three in the second and fourth ends to beat Jialiang Zang of China 9-5. Snítil was inches short of a perfect freeze with his final stone in the second end against Canada and it left Simmons just enough room to punch the Czech rock out the back side and count four. Another inch or two and that shot would not have been there for Canada and it could have been a steal for the Czechs or perhaps only a single for Simmons. “If it curled a little more, then he probably has shot for one or two or we have chance to steal,” said a disappointed Snitil. “But the whole end we were a little wide and heavy with hits so it didn’t work out. But it’s a huge difference between steal and giving up four.” Simmons said if the Czech stone had finished anymore he would have had trouble scoring. “I still had to make a pretty good shot, it wasn’t a gimme by any means,” he said. “It was edge on edge and we didn’t have a lot of breathing space there. We talked that one through well. We played the right weight in case it did hang a bit, to get ourselves one or two points anyway. As it turns out we hit it perfect. “That’s the way the game goes. We were fortunate to be on the right side of that. At the other side of the Scotiabank Centre, Scotland skip Ewan MacDonald was likewise off an inch or two with his final stone, getting only a rub and sliding to the back of the eight-foot. That left Thomas Ulsrud a straightforward hit and stick for six. “It’s not often you score six in the second end in the worlds,” said Ulsrud, the defending champ whose team had struggled in its first three games. “But we got some really good breaks and the angles turned out great for us so it was actually quite an easy shot at the end. And that was the game right there.” Back on the Canadian ice, one end later it was another couple of inches that all but put the finishing touches on the Czech team. Simmons just snuck past a long guard to punch out a Czech counter on the button and Snitil’s try to duplicate that was an inch or two wide, getting just a piece of the Canadian rock and sliding out himself. That left Canada to steal three for a 7-1 lead and they stole three more in the fourth. 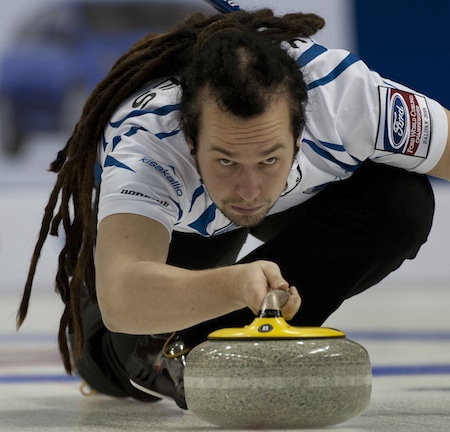 Simmons, third John Morris, second Carter Rycroft, lead Nolan Thiessen, alternate Tom Sallows, who replaced Rycroft after the fourth end and coaches Earle Morris and Rick Laing, remained the only unbeaten team at 4-0. Norway and Japan are second at 3-1 followed by Switzerland and Italy at 2-1, Finland and Czech Republic at 2-2, Sweden and Russia at 1-2, China and the U.S. at 1-3 and Scotland at 0-4. Marc Pfister of Switzerland (2-1), Joel Retornaz of Italy (2-1), Niklas Edin of Sweden (1-2) and Evgeny Arkhipov of Russia (1-2) had the byes Monday morning. The 2015 Ford Worlds continue on Monday with draws at 2:30 p.m. and 7:30 p.m. (all times Atlantic). All Canadian games and the playoff rounds for the 2015 Ford World Men’s Curling Championship will be televised on TSN/RDS2, the official broadcasting partner of the Season of Champions. The full broadcast schedule is available at https://www.tsn.ca/2014-15-tsn-curling-broadcast-schedule-1.95515. Live scoring is available at: https://www.curling.ca/scoreboard/#/competitions/1670-2015-ford-world-men-s-curling-championship/scoreboard To purchase tickets to the 2015 Ford World Men’s Curling Championship, go to: https://www.curling.ca/2015worldmen-en/tickets/ The French version of this story will be available at https://www.curling.ca/2015worldmen-fr/ as soon as possible.