Marc Pfister and his Switzerland foursome scored four in the second end Monday and cruised to a 7-1 win over Joel Retornaz of Italy to improve to 3-1 for a share of second place after seven draws at the 2015 Ford World Men’s Curling Championship at the Scotiabank Centre in Halifax. 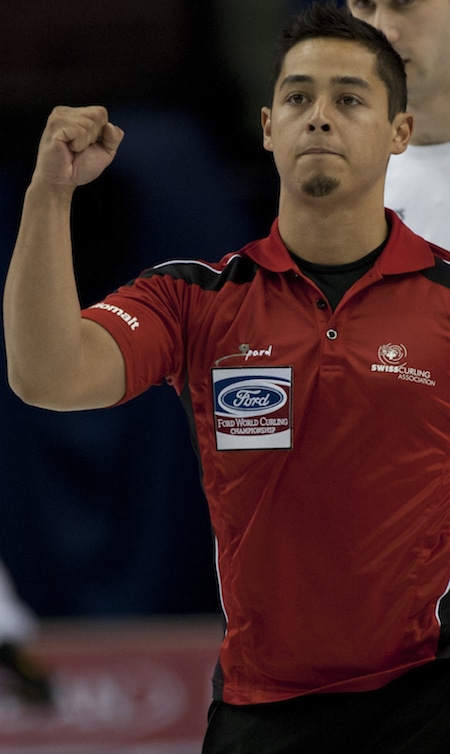 Only Pat Simmons of Canada, unbeaten at 4-0, is ahead of the Swiss team of Pfister, third Enrico Pfister, second Reto Keller, lead Raphael Mäkelä, alternate Sven Michel and coach Pius Matter. “3-1 is good,” said Swiss national team coach Andi Schwaller. “Of course the heavy favourites are coming, with Canada, Sweden, Norway, but 3-1 we would have signed that.” In other afternoon games Niklas Edin of Sweden scored three in the first end en route to a 9-3 win over Evgeny Arkhipov of Russia, Jiří Snítil of the Czech Republic overcame an early 4-1 deficit to beat struggling Ewan MacDonald of Scotland 8-6, and Aku Kauste of Finland got one in the 10th to nip Yusuke Morozumi of Japan 5-4. The results left the Swiss tied with defending champion Thomas Ulsrud of Norway at 3-1. Japan, Finland and Czech Republic are at 3-2 followed by Italy and Sweden at 2-2, Russia, China and the U.S. at 1-3 and Scotland at 0-5.

A different Swiss squad won a bronze medal last year, beating Canada’s Kevin Koe 7-5, and Pfister took another step towards this year’s playoffs with his win Monday. After getting the 4-0 lead Pfister and crew kept the Italians from mounting any serious challenges, limiting them to just a single in the fifth end. Schwaller said he’s not surprised by his team’s showing: “No, not much. I told them if they play like they did at home they have a good chance at the playoffs. I told them, no fear. Of course there are some good teams, experienced teams coming that they haven’t played yet but, hey, go for it. “Just believe in yourself. We have a good system back home so whoever wins knows that, hey, we are good. If we play like we can we have a good chance at playoffs.” Canada (4-0), Norway (3-1), Jialiang Zang of China (1-3) and John Shuster of the U.S. (1-3) had the afternoon byes. The 2015 Ford Worlds continue on Monday with an evening draw at 7:30 p.m. AT. All Canadian games and the playoff rounds for the 2015 Ford World Men’s Curling Championship will be televised on TSN/RDS2, the official broadcasting partner of the Season of Champions. The full broadcast schedule is available at https://www.tsn.ca/2014-15-tsn-curling-broadcast-schedule-1.95515. 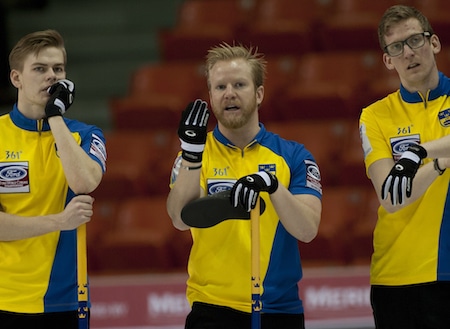