Swedes on a roll at Ford Worlds

Niklas Edin of Sweden continued to score in bunches Wednesday, rolling to a 9-2 win over Yusuke Morozumi of Japan to move ever closer to securing a playoff berth at the 2015 Ford World Men’s Curling Championship at the Scotiabank Centre in Halifax.

Sweden’s Niklas Edin and his team are heating up at the Ford Worlds. (Photo, Curling Canada/Michael Burns)

Edin, third Oscar Eriksson, second Kristian Lindström, lead Christoffer Sundgren, alternate Henrik Leek and coach Fredrik Lindberg won their fourth straight game to improve to 6-3. When Marc Pfister was heavy with his last-rock draw, allowing Scotland to steal a 5-4 win that dropped Switzerland to 5-4 and left Sweden alone in third behind front-running Norway and Canada, both at 7-1. “We’ve had five games in a row now that were very important and this one probably the most important of them, being at the same spot in the table,” Edin said of the win that showed his team is back on track after a 2-3 start. The 2013 world champion said part of the reason for his slow start was the health of Sundgren, who missed two games and struggled in a few others as he battled a stomach bug. “He’s really important for our sweeping and communicating, so it got difficult,” said Edin. “Our alternate did as good job but it still wasn’t the same. We had a hard time getting the rocks in the right position and we really struggled. Getting him back now it feels normal again and we get every rock exactly where we want it instead of doing half shots. That’s a big thing. “The second thing is we can cope with the ice a lot better now. We struggled big time with the ice and the rocks in the beginning and I think it’s colder and better now and we’ve gotten used to it.” In their four recent wins Sweden has outscored its opposition 35-13, something other teams are likely noticing. Against Japan Sweden scored two in the first end then added threes in the third and sixth ends. “They know we can play well, especially when we get a lead,” said Edin. “I think most of them wouldn’t like to see us (in the playoffs), but at the same time they can beat us if they play as well as they can. And winning this way says a lot about our team and our spirits right now.” Japan made the tiebreaker round last year in Beijing with a 7-4 record, losing eventual silver medallist Sweden, and Morozumi and his team came here expecting to improve on that result. After starting 3-1 they have now lost three of their last four games. The young Swiss got off to a rocky start against the veteran Scots skipped by Ewan MacDonald and with fellow former world champion David Murdoch at third, falling behind 3-1 after four ends. Pfister and company stole singles in the seventh and eighth ends to take a 4-3 lead coming home but couldn’t hold on. 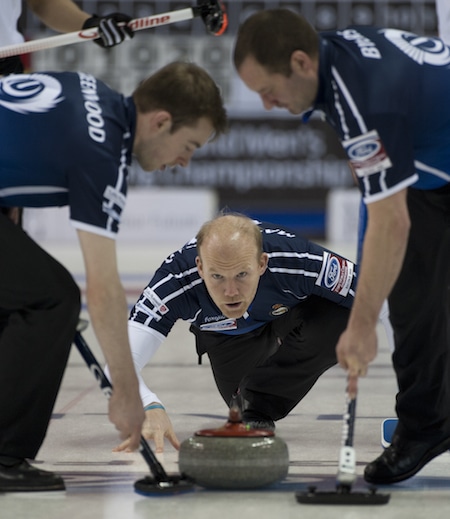 It was a game of two teams going in opposite directions. After starting the championships with five straight losses, Scotland has not won three straight. The youthful Swiss had been on a 5-1 roll but have now lost three in a row. In the other afternoon games, Aku Kauste of Finland scored two in the final end to beat Evgeny Arkhipov of Russia 8-6 and Joel Retornaz of Italy beat Jiří Snítil of the Czech Republic 9-6. Those results kept alive the faint playoff hopes of Finland (4-4) but all but ended those of Snítil (3-5). “It’s all mixed up now and anything can happen so it was a big win,” said Kauste. “After two losses yesterday, maybe a bit more (nerves) today. Was also a more difficult game today, I think we had six picks. And Russia’s last rock I think picked a bit also and that left us a bit easier shot for the win.” Pat Simmons of Canada (7-1), Thomas Ulsrud of Norway (7-1), John Shuster of the U.S. (3-5) and Jialing Zang of China (3-5) had the afternoon byes. The 2015 Ford Worlds continue on Wednesday with an evening draw at 7:30 p.m. AT. All Canadian games and the playoff rounds for the 2015 Ford World Men’s Curling Championship will be televised on TSN/RDS2, the official broadcasting partner of the Season of Champions. The full broadcast schedule is available at https://www.tsn.ca/2014-15-tsn-curling-broadcast-schedule-1.95515. Live scoring is available at: https://www.curling.ca/scoreboard/#/competitions/1670-2015-ford-world-men-s-curling-championship/scoreboard To purchase tickets to the 2015 Ford World Men’s Curling Championship, go to: https://www.curling.ca/2015worldmen-en/tickets/