Pat Simmons of Canada and Thomas Ulsrud of Norway finished off their round-robin play at the Ford World Men’s Curling Championship with their 10th wins Thursday and immediately set about planning for their rematch in Friday’s Page 1-2 playoff game. 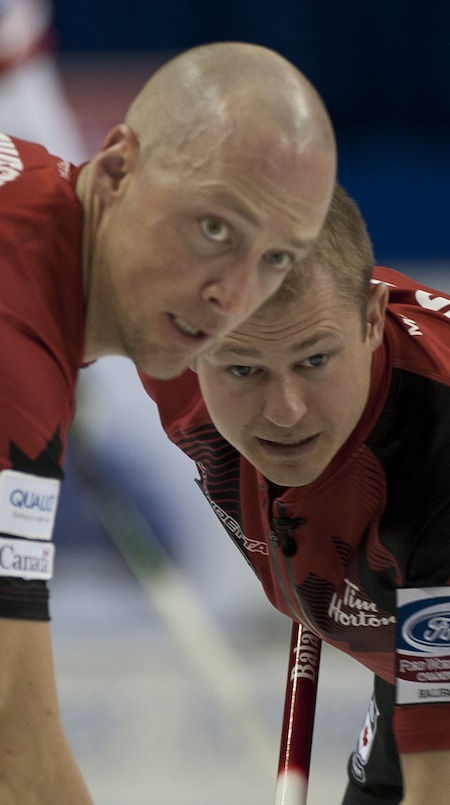 Simmons used his last rock to pick out Italy’s counter and score a single for a 7-6 win over the Joel Retornaz team, while Ulsrud jumped into an early lead to beat Marc Pfister of Switzerland 6-4. “That was a good way to finish, to have a game where Pat has to make his last one,” said Canadian third John Morris. “Those are always nice to have, a bit of pressure going into the playoffs. A good character win, good to finish off with a win and we can build on that going into the playoffs.” Against Norway, which beat Canada 9-3 in the round-robin, Morris said he, Simmons, second Carter Rycroft, lead Nolan Thiessen, alternate Tom Sallows and coaches Earle Morris and Rick Lang have to be prepared for battle. “We have to be sharper all up and down. We seemed dull and flat and they took it to so we have to make sure we match their intensity. We’re going to have a good set of rocks for the playoffs. We expect a better battle then we gave them the first game.” Norway and Canada finished atop the standings with 10-1 records but because they beat Canada Norway gets to choose between hammer or rocks and Ulsrud said they will take the hammer. “I was surprised we’re 10-1 but hey, we have two shots to go to the final and both with hammer so that’s good,” said Ulsrud. “I was a little anxious going into the week. We practised a lot but not a lot of games so I was afraid we would be rusty and we were at the beginning. But now it is picking up so it looks good.” Niklas Edin of Sweden, the 2013 world champion, guaranteed himself a playoff spot with a 7-6 win over Jialiang Zang of China and John Shuster kept alive the U.S. hopes with a 6-5, extra-end win over Evgeny Arkhipov of Russia. Edin, third Oscar Eriksson, second Kristian Lindström, lead Christoffer Sundgren, alternate Henrik Leek and coach Fredrik Lindberg had a difficult time with China until the seventh end. Two half misses by Zang allowed Edin to set up the house for a routine hit and stick with his final stone to score three for a 7-3 lead. But China got two back in the eighth and stole one in nine and forced Edin to make a routine hit-and-stick with final rock to win. 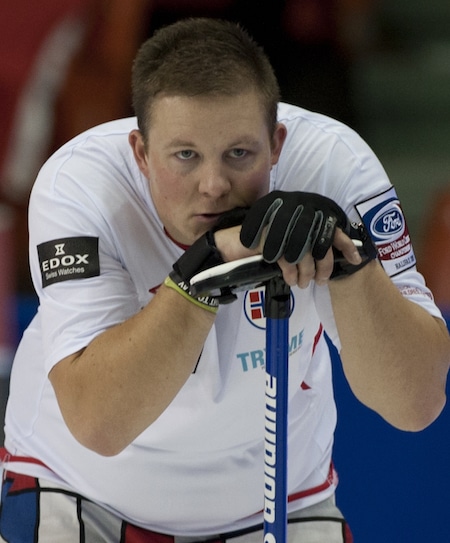 “I didn’t have my best day of work today but there’s still one more game to come and we’ll try to find the playoff form,” said Edin who will finish his round-robin against Scotland in the evening draw. “Tonight is really important, especially for me. I want to play well and really see what we can do in trying to set up angles and stuff because we’re going to need that in the playoffs.” With one draw remaining there are three teams with five losses – U.S. at 6-5 and Switzerland and Finland at 5-5. Switzerland plays Yusuke Morozumi of Japan (4-6) and Finland meets Italy in the two matches that will determine the final standings. With only one round of tiebreakers allowed under World Curling Federation rules, the U.S. needs a loss from either Finland or Switzerland to reach a tiebreaker because it would be ranked third, having lost to both the Finns and the Swiss. Aku Kauste of Finland (5-5), Japan (4-6), Jiří Snítil of the Czech Republic (3-7) and Ewan MacDonald of Scotland (3-7) had the afternoon byes. The 2015 Ford Worlds continue on Thursday with the final round-robin draw at 7:30 p.m. AT. All Canadian games and the playoff rounds for the 2015 Ford World Men’s Curling Championship will be televised on TSN/RDS2, the official broadcasting partner of the Season of Champions. The full broadcast schedule is available at https://www.tsn.ca/2014-15-tsn-curling-broadcast-schedule-1.95515. Live scoring is available at: https://www.curling.ca/scoreboard/#/competitions/1670-2015-ford-world-men-s-curling-championship/scoreboard To purchase tickets to the 2015 Ford World Men’s Curling Championship, go to: https://www.curling.ca/2015worldmen-en/tickets/