Team Canada was pushed to the limit, but managed to escape with a victory in its next-to-last round-robin game on Thursday morning at the Ford World Men’s Curling Championship.

Canada was in trouble against the Finns, who were outplaying the Canadians through the first six ends at the Scotiabank Centre in Halifax. But a huge miss by Finnish skip Aku Kauste turned an easy three into just a single for Finland in the sixth. After Simmons was only half successful with a soft double, Kauste had a tight tapback for three. Instead he was wide, took out two of his own rocks and counted just one for a 3-2 lead. But it was a total miss on his last-rock take-out in the 10th that opened the door for Simmons to draw for the win. “That hurts quite a lot,” Kauste said of the loss. “We had several places where we could have gotten better results. Tough game. It was difficult ice, it didn’t curl much. Now we must win. I still think there is a little hope for the tiebreaker, but we need to win the last one.” Simmons made some mistakes himself, including a missed double that gave Finland two in the ninth for a 5-4 lead, and he said the misses were to be expected. “It’s a tough set of stones on that sheet. It’s tough because you get confidence going, we played so well yesterday, and you go out there expecting you can make that freeze on the right angle, or that fine little tap and sometimes it’s a matter of dialing it back a bit.” While Canada improved to 9-1 with the win, and already assured of meeting Norway (9-1) in the Page 1-2 playoff on Friday at 7:30 p.m. AT, the Finns dropped to 5-5 and needing some help to reach a tiebreaker game. Meanwhile, John Shuster of the U.S. pulled out a huge victory to keep his playoff hopes alive. Shuster scored two in the second end and stole one in the third en route to a 6-2 win over Jiří Snítil of the Czech Republic to improve to 5-5. In the other games, Norway’s Thomas Ulsrud beat Yusuke Morozumi of Japan 10-8 (4-6) and Jialing Zang of China (4-6) scored four in the sixth to beat Ewan MacDonald of Scotland 10-3 (3-7). Canada and Norway at tied for first at 9-1 and Sweden is third at 6-3. Switzerland is 5-4 with the U.S. and Finland now 5-5. “All we can do is just win our two (today) and hopefully we don’t end up in that tiebreaker scenario where you’re straight out without playing a game,” said Shuster. “We came out with a lot of energy, won the hammer, made it count early and then did the classic curling, get two when you have the hammer and make sure you don’t give up deuces.” 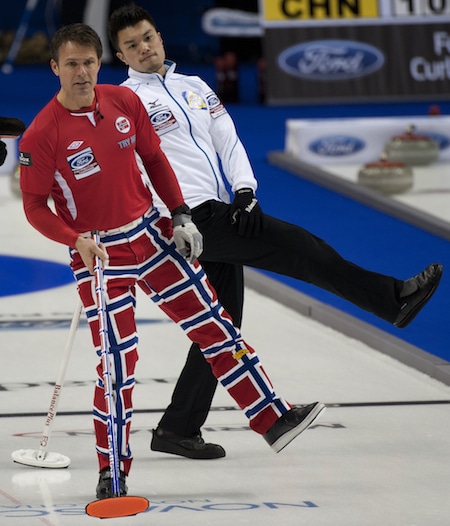 Shuster, third Tyler George, second Matt Hamilton, lead John Landsteiner, alternate Craig Brown and coach Pete Fenson have been the most consistently inconsistent team in the championship. Only once before, last Sunday when they lost twice, have they had two consecutive results the same. Today’s win gave them their first back-to-back victories. “We’ve been in very game except for the little losing streak we had early in the week,” he said. “We have a great curling team. We’ve battled together all season and we’re not going home from this thing without battling.” Niklas Edin of Sweden (6-3), Marc Pfister of Switzerland (5-4), Joel Retornaz of Italy (3-6) and Evgeny Arkhipov of Russia (2-7) had the morning byes. The 2015 Ford Worlds continue on Thursday with draws at 2:30 and 7:30 p.m. AT. All Canadian games and the playoff rounds for the 2015 Ford World Men’s Curling Championship will be televised on TSN/RDS2, the official broadcasting partner of the Season of Champions. The full broadcast schedule is available at https://www.tsn.ca/2014-15-tsn-curling-broadcast-schedule-1.95515. Live scoring is available at: https://www.curling.ca/scoreboard/#/competitions/1670-2015-ford-world-men-s-curling-championship/scoreboard To purchase tickets to the 2015 Ford World Men’s Curling Championship, go to: https://www.curling.ca/2015worldmen-en/tickets/