Aku Kauste’s final rock, pressure-packed draw just stopped in time to give Finland a single in the 10th end for a 6-5 win over John Shuster of the U.S. in the tiebreaker game Friday at the 2015 Ford World Men’s Curling Championship at the Scotiabank Centre in Halifax. 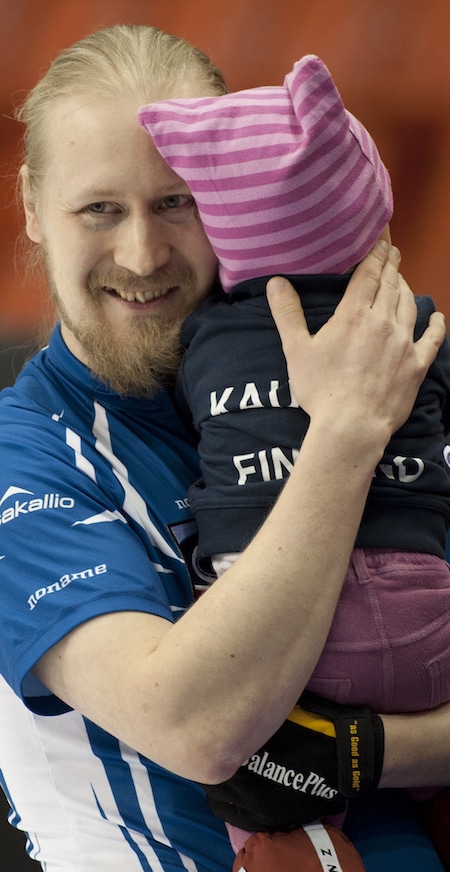 Kauste, third Kasper Hakunti, second Pauli Jäämies, lead Janne Pitko, alternate Leo Mäkelä and coach Tomi Rantamäki will now play Niklas Edin of Sweden in Saturday afternoon’s Page 3-4 playoff game. All eight players on the ice watched anxiously as the final rock of their tight battle slid across the button and just stopped in time to prevent the U.S. from stealing the winning point. Admitting he was extremely nervous with his final stone, Kauste said he knew his draw had to cross the centre line so “I can’t be too light because the brushers can’t drag it there too far. Still I was kind of heavy. That’s the tendency under pressure.” “What a game!” he added. “Some very unlucky breaks on both sides I would say. The one where we took our own out and ended up drawing against four (in the seventh). I was two millimetres off from a perfect shot and they would have been in huge trouble. “Then a couple of draws that John missed that changed the game.” Through the first half Shuster, third Tyler George, second Matt Hamilton, lead John Landsteiner, alternate Craig Brown and coach Pete Fenson kept building ends that showed promise to be either multi-pointer or steals. But each end Finland made key shots to spoil the U.S. plans. “This one’s on me,” said a disappointed Shuster. “I was having trouble for some reason, missing on opposite sides. I liked two of the three (shots) that cost us the game when I let them go. One of them obviously, the one in eight I would like to have back. I can’t err on the light side there.” The U.S. looked poised for a big end in the third until Kauste made a difficult draw to second shot and forced Shuster to draw the button for two. The first real crack by either side came in the fifth end. Again the U.S. was building the end until consecutive great hit-and-rolls by Hakunti and Kauste left Finland shot rock behind three guards. Shuster’s first attempt to pick it was inches off and barely moved the rock. Kauste drew to second shot and Shuster’s try for a soft double to score two was again off a hair and let Finland steal one. But the Americans compensated for that in the sixth. Kauste was narrow on a raise take-out try, allowing Shuster to split the house and get a deuce with an easy hit and stick. “Some ends we were in horrible trouble,” admitted Kauste. Kauste got himself in some difficulty in the seventh when he tried a raise takeout and spilled out his own counter and left the U.S. sitting two. But he bailed out himself and his team with a delicate draw to the edge of the button around two tight guards for a single and a 4-4 tie. 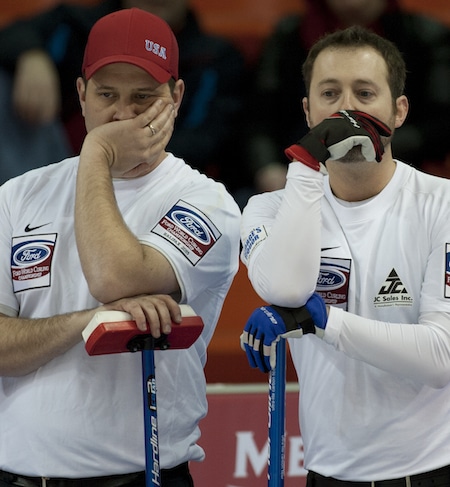 The Americans had a glorious opportunity to maybe put the game away in the eighth but failed to do so. Early Finnish misses had the U.S. filling the house but Shuster’s double try got only one and left him sitting two instead of five. Kauste drew the four foot for shot and Shuster then wrecked on a guard out front, giving Finland a steal of one. “I underthrew it,” Shuster said of the shot. “It was a spot I wanted to be careful on because we had a couple of them run on us there. I was trying to be a little too cute. I think I could probably have just put the broom on the edge of the rock and peeled it out of there, be up two playing nine we probably win.” Shuster had another great chance for two and the lead in nine but his last-rock hit-and-stick rolled out. That gave him one but Finland had the tie and the hammer coming home that Kauste used to take the win. The 2015 Ford Worlds continue on Friday with the Page 1-2 playoff game between Norway and Canada at 7:30 p.m. AT All Canadian games and the playoff rounds for the 2015 Ford World Men’s Curling Championship will be televised on TSN/RDS2, the official broadcasting partner of the Season of Champions. The full broadcast schedule is available at https://www.tsn.ca/2014-15-tsn-curling-broadcast-schedule-1.95515. Live scoring is available at: https://www.curling.ca/scoreboard/#/competitions/1670-2015-ford-world-men-s-curling-championship/scoreboard To purchase tickets to the 2015 Ford World Men’s Curling Championship, go to: https://www.curling.ca/2015worldmen-en/tickets/