Niklas Edin and his red-hot Swedish mates jumped all over a shaky Pat Simmons and Team Canada to score an easy 6-3 semifinal win Saturday that moves them into the gold-medal game of the 2015 Ford World Men’s Curling Championship at the Scotiabank Centre in Halifax.

Edin, third Oskar Eriksson, second Kristian Lindström, lead Christoffer Sundgren, alternate Henrik Leek and coach Fredrik Lindberg will now play Thomas Ulsrud of Norway in Sunday’s 4 p.m. AT final, a rematch of last year’s championship game won by Norway. The loss for Simmons extends Canada’s gold-medal drought at the worlds to three years. “It’s been quite a day today!” said an elated Edin. “We’ve had a great second half of this event and it only feels like we’re getting stronger. Now we’re looking forward to the final tomorrow. “I was a little bit surprised (at how Canada played). They came out strong all week and have been at the top of the standings. It’s not easy to keep that high level of focus all the time and then they did not play earlier today either. They made a few mistakes that I haven’t seen before but I’m happy we could get that lead and stick to it.” Simmons, third John Morris, second Carter Rycroft, lead Nolan Thiessen, alternate Tom Sallows and coaches Earle Morris and Rick Lang will have to get up early to take on Aku Kauste of Finland in the bronze-medal game at 10 a.m. AT. It was not a good omen for Canada when lead Nolan Thiessen’s first stone draw slid through the house and Simmons flashed with his last-rock takeout try to blank the first end, giving Sweden a steal right off the bat. “That was not good. That’s on me,” said a disappointed Simmons. “I set a bad tone early in the first end. Just kind of sat on a straight spot and that was not a good way to start the game. Wrong side of the inch all night. “I thought we were ready to play. It was a very well-played first end until mine … it all went downhill after that.” It was a sign of things to come. The noisy, party atmosphere or the Scotiabank Centre crowd quickly turned into subdued acceptance of Canada’s fate as time and again Canadian shots were just off the mark. “A little embarrassing,” Rycroft said of Canada’s performance. “We got tricked on a few spots. You don’t come here hoping to play in the bronze-medal game … so very disappointing.” Edin’s crew, playing on the same sheet of ice where they beat Aku Kauste of Finland earlier in the day in the Page 3-4 game, showed a remarkable knowledge of the ice from their opening stone, a perfect guard by Sundgren. 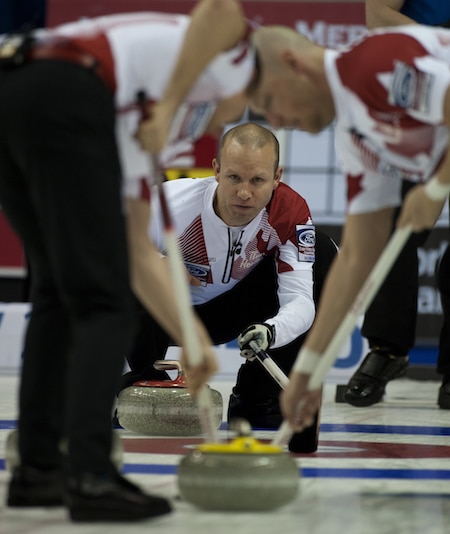 “Having played on this sheet of ice earlier, that was an advantage,” said Edin. “But the way our team played we were never going to lose this game. I think that was the strongest performance I’ve seen from our team so far and I’m really proud of how my team played today.” Canada got one in the second with a last-rock draw by Simmons but when he was wide on a thin double try in three, it left Edin an easy hit-and-stick for two. Simmons gave Canada some life in four when he made a difficult draw through a narrow port – facing four Swedish counters – for a single that kept him in the game, down just 3-2. The life was short-lived, however. In the fifth Simmons, shooting just 59 per cent to that point, missed his first draw and then had to make a double kill just to keep Sweden to a deuce. Once Edin had the 5-2 lead he turned to his team’s real strength, peels and take-outs. 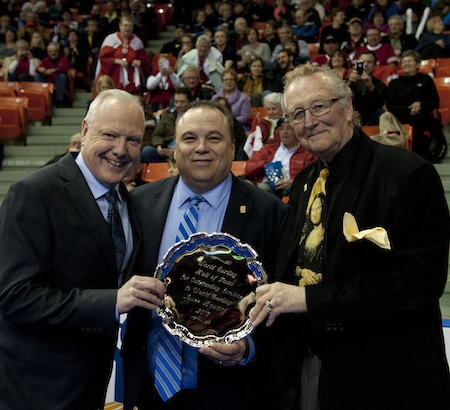 “They played great,” Simmons praised the Swedish team that has now won seven straight games. “We didn’t give them any tough shots either. You get down to them and they’re going to peel until the cows come home and they didn’t miss anything. We didn’t execute our game plan whatsoever as far as making it difficult on them.” Even the induction of Russ Howard into the World Curling Hall of Fame during the fifth-end break didn’t provide any spark for the Canadian foursome. As a team they shot a combined 77 per cent in the game and Simmons was at 72. By contrast, Edin finished a perfect 100 per cent, Eriksson was 98 and the team was 92 per cent. While Canada may suffer from a letdown of not being in the championship final, Kauste said that won’t be any problem for him third Kasper Hakunti, second Pauli Jäämies, lead Janne Pitko, alternate Leo Mäkelä and coach Tomi Rantamäki. “We have one more game and we surely want to win a medal,” said the 35-year-old skip, who has Finland back in the world championship after missing last year. “It would mean a lot for us. I don’t know about the other playoffs teams, they are all world champions so they probably don’t care about the other medals than the gold but bronze would be really big for us.”