Sweden through to Ford Worlds semifinal

Niklas Edin of Sweden stole two in the sixth and added another pair in the eighth end of a tightly contested battle to beat Aku Kauste of Finland 7-4 in the Page 3-4 playoff game Saturday at the Ford World Men’s Curling Championship at the Scotiabank Centre in Halifax.

Edin, third Oscar Eriksson, second Kristian Lindström, lead Christoffer Sundgren, alternate Henrik Leek and coach Fredrik Lindberg now play Pat Simmons of Canada in this evening’s semifinal beginning at 7:30 pm, AT. The winner of that game will move on to play defending champion Thomas Ulsrud of Norway in Sunday’s 4 p.m. final. Kauste, third Kasper Hakunti, second Pauli Jäämies, lead Janne Pitko, alternate Leo Mäkelä and coach Tomi Rantamäki will play in Sunday morning’s bronze-medal game against the semifinal loser. “It should be a real interesting game,” Edin said of the semifinal. “They’ve played well all week and we struggled at the beginning. But in the second half of the event we’ve been playing well too so it should be a really tight game. I think we need to start better than we did this game to stay in it. But if we can do that I think we have a chance at the end.” Canada beat Sweden 9-6 early in the round robin. In today’s Page 3-4 game both teams took turns making shots to prevent each other from getting the much-sought-after deuce and forcing singles and blanks through five ends. The crack finally came in the sixth after Edin executed an around-the-horn shot to sit two at the back of the button. Kauste’s first stone picked and his second came up light and off target, allowing Sweden to steal the two points. “The sixth end was kind of a nightmare,” said Kauste. “At the end I changed my other rock, we had a big difference in those rocks, it was picking several times. Pretty much everything I missed was with that one rock. Other than that it was a good game and I’m really happy how we played, other than the sixth end.” But the Finns came right back in the seventh with two of their own when Edin’s hit and roll came up narrow and Kauste made a straight tap back for the pair. 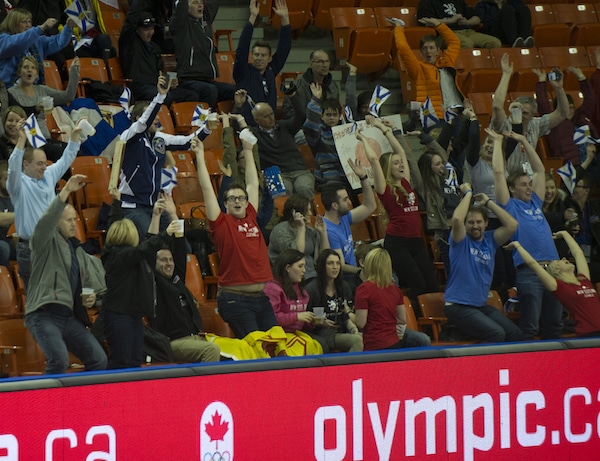 “When we stole two it was definitely our advantage but they stuck to it, they got the deuce back and we really had to fight hard to win it,” said Edin, who played a patient game. “We didn’t want to take too big a risk for them to steal a point or two, or take a two or three early in the game. We wanted to keep it close until we figured out the ice and the rocks and it took a while. It was a bit tricky at the beginning and we struggled. Finland forced Sweden into a single in the first end, Edin drawing for one with a pair of Kauste counters near the four foot. Edin made a perfect, thin double in the second to avoid Finland getting two and Kauste elected to blank, which he did again in three, waiting for a chance for two. They traded singles in the fourth and fifth before Sweden got it big break in six. Sweden got its deuce in eight when Kauste’s rock picked again and Edin made an easy double and stick for the win in ten. All Canadian games and the playoff rounds for the 2015 Ford World Men’s Curling Championship will be televised on TSN/RDS2, the official broadcasting partner of the Season of Champions. The full broadcast schedule is available at https://www.tsn.ca/2014-15-tsn-curling-broadcast-schedule-1.95515. Live scoring is available at: https://www.curling.ca/scoreboard/#/competitions/1670-2015-ford-world-men-s-curling-championship/scoreboard To purchase tickets to the 2015 Ford World Men’s Curling Championship, go to: https://www.curling.ca/2015worldmen-en/tickets/