Niklas Edin of Sweden stole three in the first end and counted threes in the fifth and seventh ends to beat defending champion Thomas Ulsrud of Norway 9-5 to win the Ford World Men’s Curling Championship Sunday at the Scotiabank Centre in Halifax. 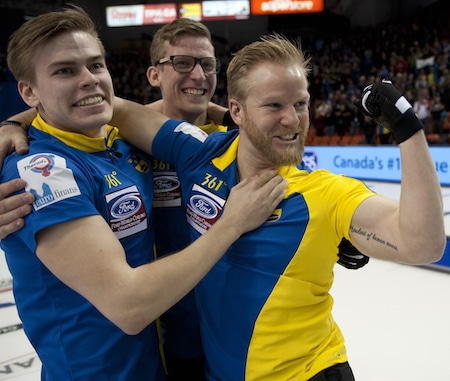 It was Edin’s second title in three years, having won in 2013 at Victoria with three different teammates.

“This feels amazing, I’m so proud of my team,” Edin said of the victory. “It felt too soon, our first year (together as a team). We didn’t really believe it was possible. But it felt really good from the get-go. And then winning the Europeans, we knew this was possible when we came into this event. We had a rough start, and we started thinking again that we might not be ready at this stage, but we picked it up and played great at the end.”

Except for the third end, Edin, third Oskar Eriksson, second Kristian Lindström, lead Christoffer Sundgren, alternate Henrik Leek and coach Fredrik Lindberg (a member of the 2013 gold-medal team), were easily the sharper of the two teams. They rarely allowed Norway to build any ends, thanks largely to the pinpoint shooting of Lindström, who constantly peeled off Norwegian guards – occasionally two or three at a time — to give Eriksson and Edin clear access to the house. Plus Eriksson badly outplayed Norwegian third Torger Nergård, shooting 90 per cent to 64 per cent.

Ulsrud, Nergård, second Christoffer Svae, lead Håvard Vad Petersson, alternate Markus Høiberg and coach Pål Trulsen were trying to become the first non-Canadian team to win back-to-back world titles. Last year they beat Sweden, with Eriksson skipping, in the final at Beijing. But Edin and company, who began the championship at 2-3, won their ninth straight game as they grew stronger draw by draw. “We focused on our game strategy, opening up the ice, and we picked it up so that we could make the playoffs,” Edin said of the turn-around. “And we felt really strong going into the playoffs, and obviously we didn’t make many mistakes there. “This is almost the same feeling as the last one (2013) but now with a new team and with the way we won — the second half of that game was pure enjoyment out there.” Sweden put Norway in the hole with its huge first-end steal of three. Eriksson helped set the house with two tight draws to the four foot and Edin made a difficult raise that kicked Norway’s counter out and left Sweden sitting three. Ulsrud couldn’t get at those and his last-rock raise attempt was wide. “It was a big steal of three in the first end, and we had a shot there and over-swept it,” said Ulsrud. “I guess it caught us by surprise — we picked some really swingy rocks and I guess the ice was a bit softer in the final today and we really didn’t handle it. “We managed to get back to all square after four, and we really should have tried to play an easier game after that. But, hey, we lost to a great team today. We lost to a better team.” The sudden deficit didn’t shake the Norwegians. Ulsrud made a delicate angle raise tap back for one in the second and then stole a deuce in three to even the match. Edin missed the angle on his first shot, an attempted angle take-out and his second wrecked on a guard, giving Norway a pair. 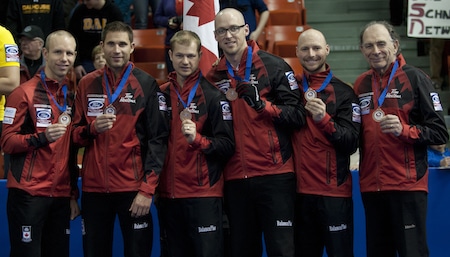 Edin blanked the fourth, trying to stem the changing tide. Lindström helped that with a very thin pick that turned into a double take-out and turned the fifth end Sweden’s way. An exchange of hit and rolls left Sweden sitting two and when Ulsrud came up short with his last rock draw, Edin drew the button for another three and a 6-3 lead. Norway got one back in six but there was to be no repeat of ends two and three. This time Sweden took control of the house early and Edin had a relatively easy, for him, takeout for three. Norway had reached the final after going 10-1 in the round-robin, tied with Canada for first place, then beating Canada 7-6 in the Page 1-2 game. Sweden finished third in the round robin at 8-3 and then beat Finland 7-4 in the Page 3-4 game and Canada 6-3 in the semifinal. It was Sweden’s seventh World Championship gold medal, second only to Canada’s 34. Pat Simmons of Canada beat Aku Kauste of Finland 6-3 in the bronze-medal game earlier Sunday. Lead Kosuke Morozumi of Japan was awarded the Collie Campbell Memorial Award, presented to the player selected by fellow curlers as best exemplifying skill, fair play and sportsmanship. The award is in honour of Canadian Collie Campbell, president of the International Curling Federation, later named the World Curling Federation, from 1969 until his death in 1978. Total attendance for the nine-day event was 56,837. The 2016 World Men’s Championship, presented by Ford of Canada, will be held in Basel, Switzerland.