Pat Simmons and Team Canada rebounded from the monstrous disappointment of their semifinal loss Saturday evening to beat Aku Kauste of Finland 8-4 Sunday morning to win the bronze medal at the Ford World Men’s Curling Championship.

Finland’s Aku Kauste calls out to his sweepers, as Canada’s Pat Simmons looks over his shoulder. (Photo, Curling Canada/Michael Burns)

After losing 6-3 to Niklas Edin of Sweden on Saturday in easily Canada’s poorest performance of the week, Simmons, third John Morris, second Carter Rycroft, lead Nolan Thiessen, alternate Tom Sallows and coaches Earle Morris and Rick Lang, came prepared to prevent a repeat of the 2014 worlds in Beijing. “We definitely wanted to come out and not completely leave here without anything,” said Thiessen. “We did that last year and it was the worst flight ever, an 18-hour flight of hell. Today we found a way. We struggled a bit early but Pat made that great hit and roll in the second and that propelled us forward.” Last year Simmons, Rycroft and Thiessen, along with skip Kevin Koe, became the first Canadian men’s team to lose all three playoff games in the world championship and only the third Canadian team in 30 years to fail to win a medal. It was Canada’s seventh bronze in world championship history and its first since Halifax’s Mark Dacey finished third 2004. It was Canada’s 50th medal, by far the highest total in the world. Canada hasn’t won gold since Glenn Howard won in 2012. “It feels good to go out on a note like that,” Morris said of the win. “We were pretty down after last night. Today was just a new team, played a lot better, Pat was awesome and it’s nice to finish on that note.” 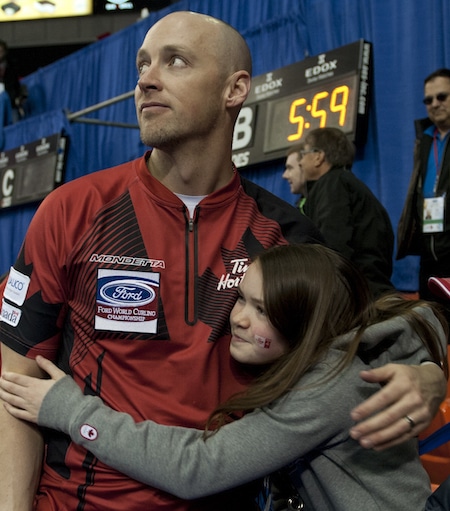 Simmons drew the button for a single in one and Canada stole one in the second when Simmons made a perfect hit and roll behind cover and Kauste was thin with his last rock angle-raise try. Kauste wrecked on a guard in the fourth giving Simmons a relatively easy tapback for three. “I think it brought some confidence to the whole team,” Simmons said of his shot in two. “They were playing well early, so that was a big shot to get everyone back on board with the confidence thing and get us going.” Another two in sixth gave the Canadians a comfortable 7-2 lead that they rode the rest of the way to the win. “It was not our best game,” said Kauste. “I think we still played pretty well but we were just on the wrong side nearly every end. We were really close with a lot of shots but what can you do. Canada played really well as well — the better team won today.” In sharp contrast to a day earlier, things were going so well for Canada that Earle Morris sang a crowd-pleasing rendition of Dream Lover after the sixth end and Thiessen’s uncle won the 50-50 draw. The Kauste foursome was trying to win Finland’s first medal since Markku Uusipaavalniemi won his second of two world championship bronze medals in 2000. Although they failed to achieve that, Kauste said he was proud of the way his team played all week, finishing 6-5 in the round-robin, winning the tiebreaker before losing to Sweden in the Page 3-4 game and to Canada today. All five of the Finns’ round-robin losses were by one point. “It’s been a really great week,” said Kauste. “I think we have done really well. Coming into this week we were looking at the field and we thought we had pretty good chances against all the teams except maybe the top three that are left here. “I think we have done much better than anyone was ever expecting — we maybe even surprised ourselves. We’ve had lots of really good games — this was the first game of the week that didn’t go to the last end. Edin plays defending champion Thomas Ulsrud of Norway in this afternoon’s final at 4 p.m. AT. The final of the 2015 Ford World Men’s Curling Championship will be televised on TSN/RDS2, the official broadcasting partner of the Season of Champions. The full broadcast schedule is available at https://www.tsn.ca/2014-15-tsn-curling-broadcast-schedule-1.95515. Live scoring is available at: https://www.curling.ca/scoreboard/#/competitions/1670-2015-ford-world-men-s-curling-championship/scoreboard