Like many clubs, downtown Toronto’s Royal Canadian Curling Club – known as “The Royals” – has a busy evening schedule of league play. But in the afternoons? Not a whole lot going on. So Royals Board member Tony Gilroy approached marketing professional and curling-savvy member Brian Chick for some ideas. Chick, known to the curling community for his commercials promoting the sport (remember Alex “The Hack” Marchand?), had a thought: with hundreds of bars and restaurants in the neighbourhood, why not offer ice to those workers who can’t come out to curl at night? “I have a lot of friends who work in the industry, and know that they work odd hours,” says Chick. “Playing in an evening sports league was impossible for them.” Afternoons are a lot busier at The Royals now that the club has recruited 12 teams to play in its new “Sociables” league, running three sessions of six weeks each. At the end of a session, teams had the option of renewing for the next session. 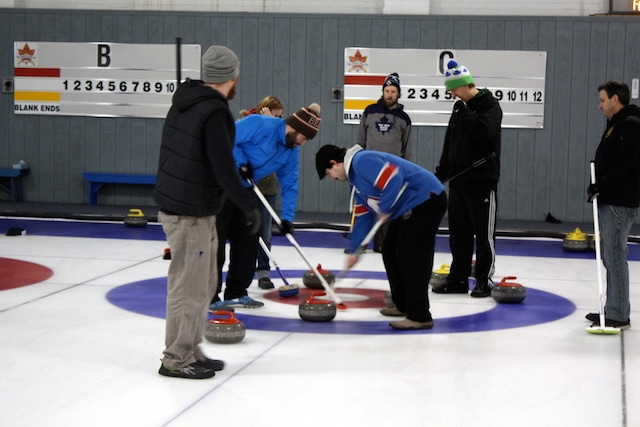 “Every team has come back for all three sessions, and now we have 14 teams (2 byes each week),” says Chick, the league’s convenor. “Our teams range from neighbourhood pubs to high-end restaurant chains. An Irish bar around the corner (An Sibin Pub) has won the first two sessions, and won what we’ve dubbed the ‘Sociables Trophy’ – borrowing from the title of the popular Brier gang. Tony helps organize the players, and runs the show when I’m out of town (which was a lot this year!).” To provide support to the 14 teams of brand-new curlers, the club ran instruction sessions during the first few weeks, and experienced Royals members join in to “coach” during games. “It was a great idea, because now we have guaranteed revenue coming in during a time slot that was rarely used,” says club manager Bill McAnally. “They’re all really enthusiastic and many have talked about trying to join our other leagues.” The early weeks of the league were all about the players just trying to figure out how to play the game, but now that they’ve been at it for almost a full season, the tone has changed a bit. “They’re all super competitive and want to win, and represent their bar,” says McAnally. “It’s great to see so many new young curlers in the club,” adds Board-member Gilroy. “Look at the demographics out there, it’s a really young crowd. We have 14 teams, that’s 56 curlers, most out them under 35 years old. If we can get a few of them into our other leagues, it would be great for the membership.” As for the curlers themselves, a whole new sporting world has opened up. “I never thought I would like it as much as I do,” says Sarah Kim, a bartender, who plays for the team representing the Wide Open Bar. “Now that I’ve played and know the rules I even catch myself watching it on TV. It’s seriously something to look forward to now in the winter months. Everything about it is so much fun! The strategy (although we’re all beginners) and making shots that count is an exhilarating feeling. “ “And of course winning,” she adds. “Who doesn’t like to win?” 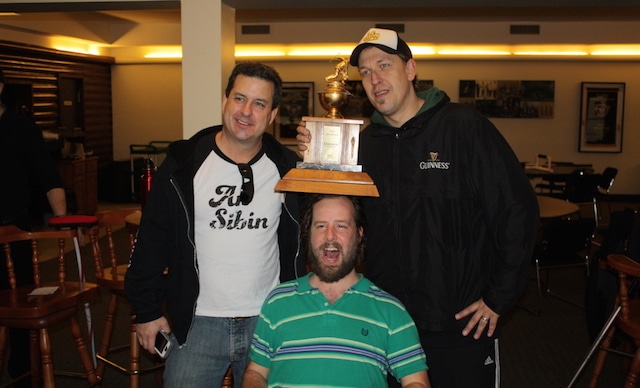 Members of the An Sibin Pub team celebrate winning the “Sociables Trophy” in the afternoon “bar league” at the Royal Canadian Curling Club in Toronto. Sadly, their two-time winning streak ended when a team from The Fox and Fiddle won the third and final session of the year. (Photo Brian Chick)