Wins for Canada as World Seniors get underway in Sochi

Team Canada’s men and women got off to a winning start at the World Senior Curling Championships in Sochi, Russia, on Saturday. But it took Alan O’Leary and his Halifax team of third Andrew Dauphinee, second Danny Christianson, lead Harold McCarthy and coach Bill Tschirhart a few ends to get rolling against Latvia’s Ansis Regza. Trailing 3-0 after three ends, the Canadians got on track in four, scoring one and then stealing the next two ends on the way to a 5-3 victory. 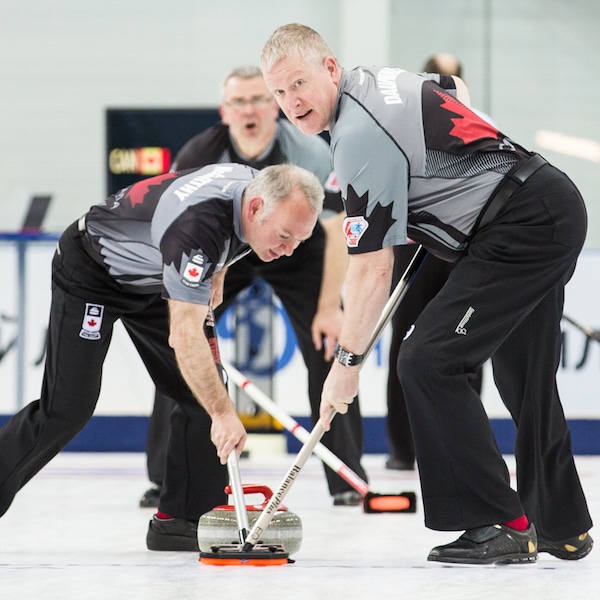 “This is a sigh of relief,” said O’Leary afterwards. “We came out just a little nervous more than anything. Latvia played great for the first few ends, but our coach (Tschirhart) gave us a tough talk at the fourth end break, so we just got focused and had a couple of breaks.” On the women’s side, the Brandon, Man., team of Lois Fowler, with third Maureen Bonar, second Cathy Gauthier and lead Allyson Stewart and coach Tschirhart, stole a huge six points in the fifth end for an 11-1 win over Italy’s Fiona Grace Simpson. “We’re very pleased,” said Fowler. “We started a little slow, but overall we’re very comfortable. We just need to stay focused on the broom.” The World Seniors competition is taking place at the same arena that housed the figure skating training facility during the 2014 Winter Olympics. “We’re absolutely enthralled by Sochi,” Fowler said about the experience of competing at the former Olympic site. “It’s unbelievable to see all the infrastructure left from the Olympics. The opening ceremony was amazing – beautiful with all the costumes.” “We’re just enjoying every moment,” she said. On Sunday, the men have two games, facing Kazakhstan’s Viktor Kim and Czech Republic’s Matej Neznal, while Fowler will play only one game, against New Zealand’s Wendy Becker. The round-robin draws for the World Seniors will run through to April 23 before the playoffs get underway. There are 24 senior men’s teams, split into three eight-team pools (one nine-team pool, two eight-team pools) and 13 senior women’s teams, split into two pools (one seven-team pool, one six-team pool). On April 24, the senior men’s and women’s gold-medal and bronze-medal games are scheduled for 6 a.m. Eastern. For live scores and standings from the World Seniors Championship, go to: wscc2015.curlingevents.com/.