Playoffs for Fowler and O’Leary at World Seniors

Lois Fowler wrapped up the round robin on Thursday with a 12-3 win over Slovakia to finish in second place in Group B and ensure a spot in the quarter-finals of the World Senior Curling Championships in Sochi, Russia. 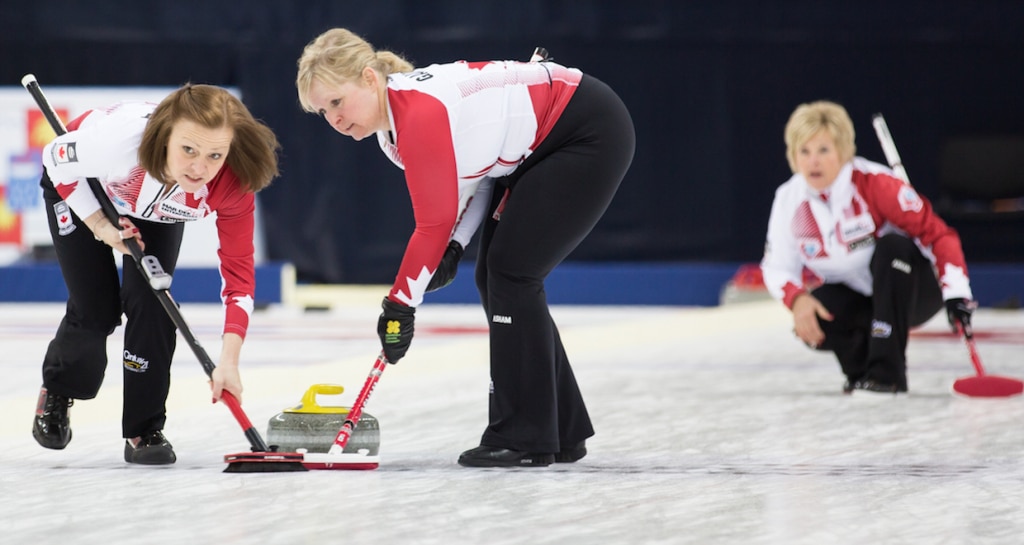 Rebounding from a loss to the USA on Wednesday, Fowler and her Brandon, Man., team of third Maureen Bonar, second Cathy Gauthier, lead Allyson Stewart, with coaches Brian Fowler and Bill Tschirhart went straight to offence, scoring four points in the first end. A steal of four in the fifth end gave the Canadians a 12-2 lead, and Slovakia, skipped by Margita Matuskovicova, could only manage one more point before conceding after six. With the win, the Canadian women finish in second place in their pool, behind the USA (5-0), and will move on to the quarter-finals on Friday against Switzerland. “We’re in good shape,” said Fowler after the win. “It would have been nice to be 5-0 but we just rolled a smidgen too far in that game against USA. We’re back in the swing of things and ready for play-offs.” “Before we came, our goal was to make play-offs, number one, and we’ve had good games and good practices in the evening,” she said. “The ice has been a challenge but we seem to be picking up on it okay.” In the final game in the men’s round robin, Alan O’Leary and his Halifax team of third Andrew Dauphinee, second Danny Christianson, lead Harold McCarthy and coach Bill Tschirhart took the lead over Italy’s Danilo Capriolo after three ends and never looked back, earning a 7-2 win to remain undefeated and cement their first-place position in Group A heading into the playoffs. Playoffs begin on Friday with tie-breakers (2 a.m. ET) and qualification games (7 a.m. ET). Quarter-finals begin at 2 p.m. ET. On April 24, the senior men’s and women’s gold-medal and bronze-medal games are scheduled for 6 a.m. Eastern. For live scores and standings from the World Seniors Championship, go to: wscc2015.curlingevents.com/.