An athlete, on and off the ice

There are a couple of things that make Ashley Quick particularly unique as a Canadian curler. 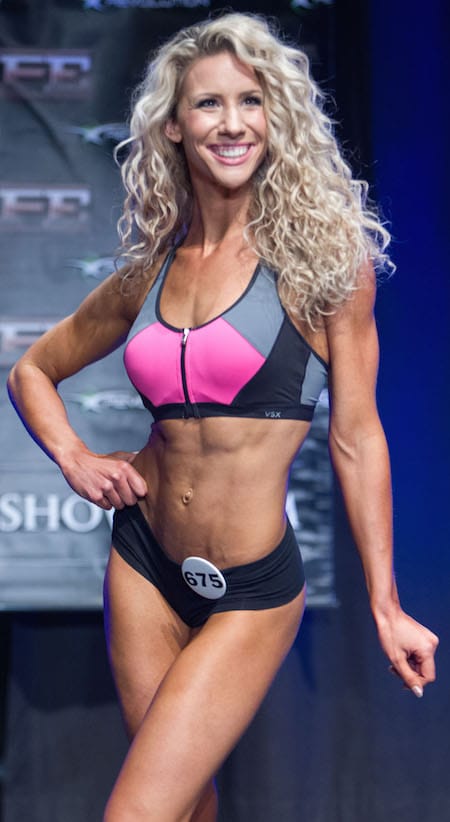 Ashley Quick is not only a successful curler, she’s a rising star in fitness/bikini competitions. (Photo, courtesy of UFEShows.com/ChrisVLinton.com

First, in an era during which fitness has never been more important as a building block to being a competitive, elite curler, the 25-year-old marketing co-ordinator for Ens Auto in Saskatoon has taken it to another level as a championship-level fitness/bikini show competitor, winning the first three competitions she entered earlier this year. Second, with the International Olympic Committee on the verge of granting medal status to mixed doubles curling — meetings are scheduled for June 7 and 8 in Lausanne, Switzerland, where the World Curling Federation will make its formal pitch, with a formal vote likely to follow soon after — Quick, who’s competed with partner Mike Armstrong of Regina in all three Canadian Mixed Doubles Trials, says that beginning with the 2015-16 curling season, her focus will be shifted almost completely to the mixed doubles discipline as opposed to traditional four-player curling. Suffice it to say, Quick is standing out on the Canadian curling scene — the irony being that it took bribes of greasy food from her mother years ago to even get her onto a sheet of curling ice in the first place. “My parents both curled, so I was at the rink a lot, but my first three years, until I was 11, I hated it,” said Quick with a laugh. “My mom would bribe me with food to get me to the rink — ‘If you come with me to the rink, we’ll stop for French fries and gravy.’ Ironic, right? But that’s what got me started. And I’m a pretty competitive person, so once you get to a certain level and start winning some games, you get addicted to it.” Quick (then Ashley Gregoire) would eventually get good enough to claim a Saskatchewan junior women’s championship, throwing second rocks for Stephanie Schmidt (then Stephanie McVicar) in 2008, a team that would go on to lose to Manitoba’s Kaitlyn Lawes in the gold-medal game at the Canadian Juniors in Sault Ste. Marie, Ont. Since then, she’s remained a highly active curler, making it to the provincial Scotties on a few occasions and winning the provincial mixed doubles title in 2013 with Armstrong. Unlike her curling career, her move into fitness/bikini competition, and her ensuing success, basically came out of nowhere. Understand, Quick had always remained fit, she’d always eaten healthy food (mostly), so it wasn’t like she was in need of a body overhaul. But something clicked in her last fall. Firstly, her husband, Matt, was already a devoted gym-rat, going four or more times a week (Quick’s gym routines mostly revolved around cardio work). “He was going to the gym while I’d stay home and watch Netflix,” said Quick. “So part of the reason I started going to the gym was to spend more time with him. I thought, ‘Why the heck am I not going? That makes no sense.’ ” Once she started attending the gym, she noticed women who were clearly not simply training to stay fit — they were training to compete, getting their bodies in the kind of condition that puts them on stages for all to admire. “I saw other girls in the gym prepping for these shows and I thought, ‘Well if they can do it, why can’t I?’ ” recalled Quick. “I couldn’t imagine myself doing it, getting up on stage and competing, but then I thought it would be a perfect challenge. And I like challenging myself. I saw the other girls, and I thought, ‘I could probably beat them.’ ” 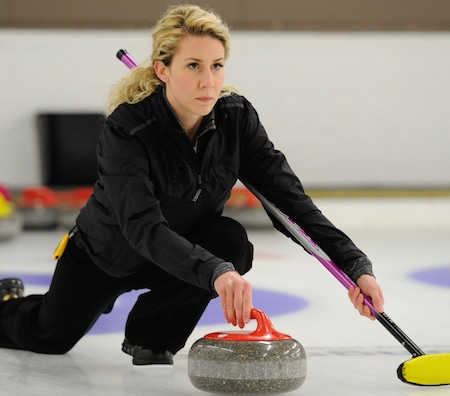 Ashley Quick has competed at the past three Canadian Mixed Doubles Trials and will be focusing on the mixed doubles discipline during the 2015-16 season. (Photo, courtesy Claudette Bockstael)

So last November, Quick committed to not only a training regimen that would see her in the gym six days a week for a minimum 90 minutes a day, but also a dieting plan that would get her body to the lean condition required for competition. “I had no idea what I was in for; it’s a huge commitment,” said Quick, who is effusive in her praise of coaches Sarah Maduck and Orlando Hamm from Agile Athletics in Saskatoon. “When you start, you hope that you’ll get somewhere, that you’ll look good and that you’re going to win. But you have NO idea. Once you peel off the layers of soft, the fat, you don’t know what’s going to be underneath. At that point, I already thought I was pretty fit. And then I started going to the gym six days a week.” The gym routine was enough of a challenge — add in the strict eating plan, and Quick’s life was turned upside down. “I always ate quite healthy, and I’ve always liked creating new healthy recipes. But prepping for a show, the diet is so restricted,” said Quick, whose blog, Motivation’s Kitchen, contains some of the recipes she used through the process. “There are times when you can’t have salt, you can’t have spices, you have to drink distilled water, you can’t have carbs at all, and track the different kinds of fats you’re eating. It takes healthy eating to a whole other level. And, oh my gosh, not cheap at all. There are days where we might have to eat 10 cups of vegetables and 24 ounces of tenderloin. You’re at Costco buying these huge chunks of beef and they last, like, three days.” She also curled through the process, reaching the Northern women’s playdowns with her Saskatoon team and also playing at the Canadian Mixed Doubles Trials in Ottawa with Armstrong, missing the playoffs after reaching the quarter-finals in 2013 in Leduc, Alta., and making the semis in 2014 in Ottawa. “I would bring all of my own food to cashspiels,” said Quick. “And we’d get a hotel room with a fridge, and the ladies I curled with were just so supportive.” Not surprisingly, her training in the gym paid off on the ice. “My delivery — I think because my muscles are more in balance now, I felt like I was on the broom all the time and I felt much more in control of my body,” she said. “And sweeping-wise, I was probably 10 times more effective and I was rarely out of breath. My endurance was much better.” But the focus was still on her first fitness/bikini competition — Ultimate Fitness Events (UFE) Invasion on April 25 in Warman, Sask. 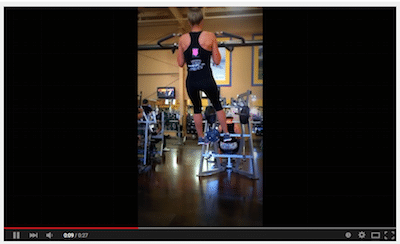 Click on the photo to see video of Ashley Quick in training.

Competitors are divided by height, with Quick, five foot nine, competing in the tall division. She would claim top spot in both the Fitness Model and Bikini Model tall divisions, as well as the overall bikini title — a result even more surprising considering the judging criteria for the fitness and bikini competitions have some significant differences, with the former putting more emphasis on tightness and musculature, although both favour bodies with symmetry — wide shoulders, narrow waist and strong legs. “I just got lucky — I guess I have a physique that fits both competitions,” she said. “Oh, my goodness — I was so, so surprised. I put absolutely everything I had into doing these shows. But thought, if I’m going to do this, I’m going to commit. And when I won the first show? I could have cried, I was so excited. I had no idea.” She would win again in the Bikini Tall division at the Saskatchewan Amateur Body Building Association (SABBA) novice provincials two weeks later in Moose Jaw, and capped her rookie season with another Bikini Tall triumph at the SABBA provincials on May 23 in Saskatoon. Her first-year results have qualified her for the Canadian championships as well as the UFE World Championships, where she’ll compete in the fall in Toronto. Victories at those events would open a plethora of doors, including magazine shoots and product endorsements. In this day and age, she’s hardly alone as a curler who hits the gym hard — Team Brad Jacobs has a well-earned reputation for its workout regime, and 2015 Canadian mixed doubles champs Kalynn Park and Charley Thomas also are devoted to off-ice training. Interestingly, Quick says her curling background gave her an advantage in fitness/bikini competition. “To curl well, you HAVE to be in shape,” she said. “(Elite) curlers have a lot of muscle, and in my case, when I leaned out a little bit (trimmed body fat), the majority of my muscle, my legs, my glutes, biceps and triceps — that’s from curling. A lot of the things they judge on in fitness competitions is your muscle maturity, and I was head and shoulders above other people because I’ve been curling so long. And I got better as a curler from my training. The fitter you are, the more of an advantage you have.” Her seasons — curling and fitness — are over now, and while she’s still hitting the gym, she’s eating relatively normally and, yes, paying close attention to what’s going to shake down at the IOC meetings in Lausanne. “Who doesn’t want to be an Olympian? There is no greater goal than going to the Olympics, and hopefully mixed doubles will be a part of it — that’s the ultimate dream,” she said. “Mike and I both love mixed doubles; it’s such a different sport, and if I could choose, I would play mixed doubles exclusively for the rest of my life.”