COLLINGWOOD, Ont. — Curling Canada’s Hall of Fame welcomed its class of 2015 on Tuesday night, with one name not previously announced being added to the list. 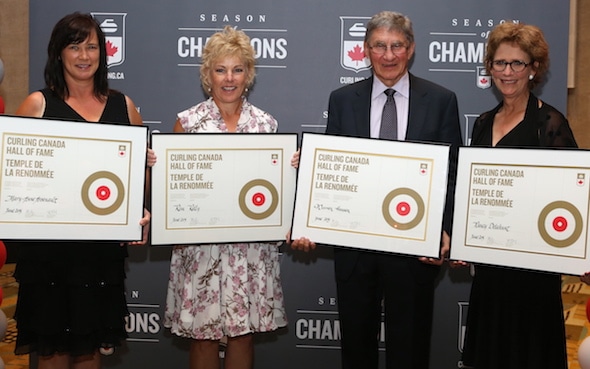 Warren Hansen, Curling Canada’s longtime Director of Event Operations, whose departure from Curling Canada was announced earlier this month, was inducted on Tuesday night during the Hall of Fame and Awards Gala at Blue Mountain Resort. Hansen was inducted as a Builder/Curler, and was joined on Tuesday by curlers Kim Kelly, Mary-Anne Arsenault and Nancy Delahunt, along with Executive Honour Roll inductee Marilyn Neily. Hugh Avery also was to be inducted on Tuesday night into the Executive Honour Roll but his induction is being delayed as he is standing as a candidate for an additional one-year term with Curling Canada’s Board of Governors. “It was a no-brainer for Warren Hansen to be inducted into Curling Canada’s Hall of Fame as quickly as possible,” said Avery, the Vice-Chair of the Board of Governors. “His contributions to our sport impact all of us, and will have a lasting effect as curling continues to grow, both in Canada and around the world.” As a curler, Hansen was a member of Hec Gervais’s 1974 Brier championship team from Edmonton, but it was his work as a builder that took the sport of curling to new levels, both in Canada and around the world. He was involved at the ground level in establishing coaching, officiating and ice making guides in Canada, and also helped teach the sport of curling around the world. He also built Curling Canada’s national men’s and women’s championships — the Brier and the Scotties — into major sports and entertainment properties. More than anything, he wanted to establish curling as a sport of athleticism, and worked hard to eliminate old stereotypes. That played a significant role in curling’s re-acceptance as an Olympic medal sport, beginning with the 1998 Winter Games in Nagano, Japan. “I am truly grateful and humbled by this honour, and I share it with all the people I’ve worked with along the way as we pushed the boundaries on raising the profile of our sport,” said Hansen. “Seeing it at the Olympics, and seeing how our athletes have continued to push themselves to high levels of fitness, tells me the hard work was worth it.”