Paralympic gold-medalist Mark Ideson is throwing stones at the KW Granite Club in Waterloo, Ont., but it’s not the stones placement that’s getting all the attention. No, today the focus is on what he’s wearing: an advanced motion tracking suit that scientists and engineers at the University of Waterloo are using to develop the first-ever biomechanical model of a wheelchair curler in an attempt to improve performance and minimize the risk of injury. “I’ve been doing Olympic and Paralympic research for many years now,” says Brock Laschowski, a Masters student in Engineering at the University of Waterloo, who is also collaborating with members of the Canadian Sport Institute Ontario on this project. 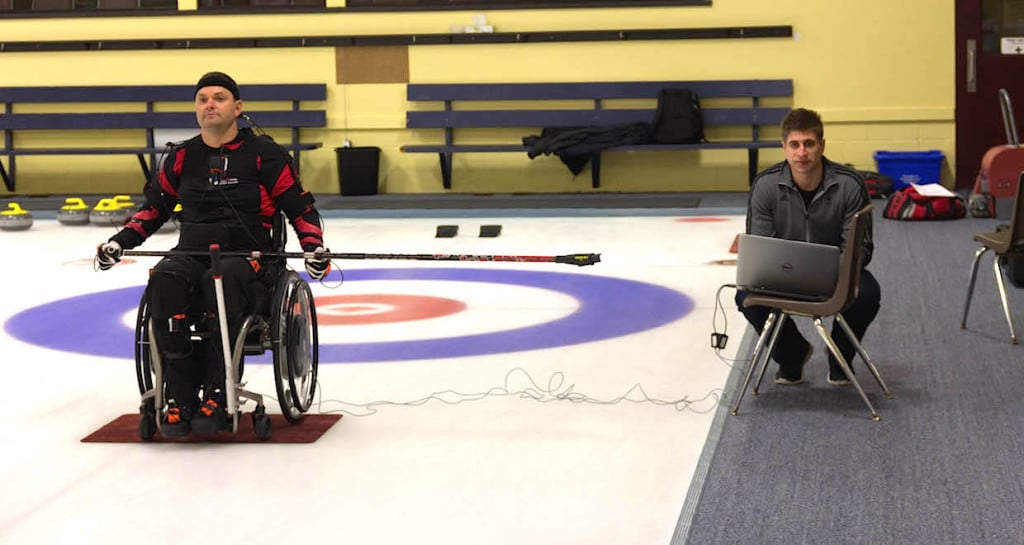 Laschowski has already worked with a number of high-performance sport teams, including trampoline, beach volleyball, wheelchair basketball, women’s ice hockey, swimming, cross country skiing, sailing, and rowing, but he says the greatest potential for improvement is in Paralympic sports. “Historically, they haven’t received much attention,” he says. “I’m not interested in reinventing the wheel. I only look for research projects that no one else has done before and something that can have a worthwhile contribution to science and engineering as well as sport development in Canada.” This research, led by Laschowski, is being conducted alongside Dr. Naser Mehrabi (Post-Doctoral Fellow in Engineering) and supervised by Dr. John McPhee (Canada Research Chair in Biomechatronic System Dynamics). In the first stage of this research, the Waterloo group plans to use advanced medical imaging to measure various mechanical properties of the human body, as needed to develop a biomechanical model of a wheelchair curler. That’s where Paralympian Ideson comes in. “Whenever we develop a biomechanical model, you have to specify certain parameters for the computer simulation, like the length of the leg, the mass of the head, the dimensions of the hand,” says Laschowski. “However, nobody has ever provided that data for a Paralympic (including wheelchair curling) population.” 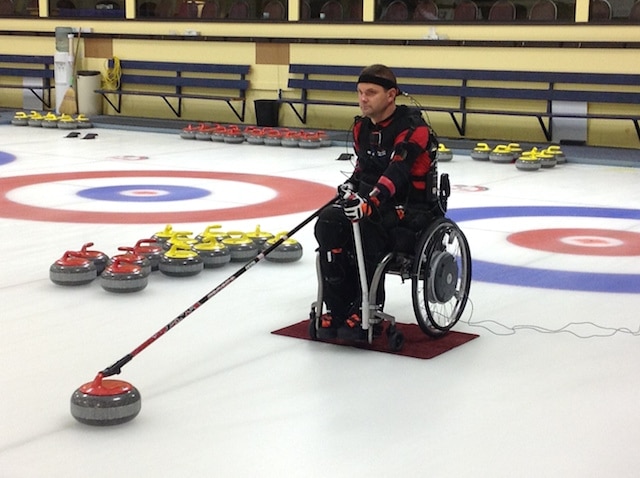 Paralympic gold-medalist Mark Ideson is throwing stones at the KW Granite Club in Waterloo, Ont., but it’s not the stones placement that’s getting all the attention (Photo courtesy Dr. John McPhee)

The second stage tackles the issue of motor control. “There are many different theories as to how the brain commands the body to move,” explains Laschowski. “If you were to reach forward for a cup, your brain (neural system) can activate and coordinate your arm to extend in many different trajectories for example. This is called motor control.” “We’re developing a physics-based motor control model,” he says. “The goal is to mathematically represent how Mark’s brain tells his body to move. Altogether, once we have a physical representation of Mark’s body, in addition to an appropriate motor control algorithm, we can then run simulations” The final stage of this research includes running predictive simulations. This work will be able to determine the “optimal” configuration of different pieces of equipment (for example, the wheelchair and delivery stick) without the need for expensive and time-consuming experiments. “A lot of what is done with various Paralympic (and Olympic) teams is focused on experimental trial and error, and based on feel. We’re looking to incorporate the latest developments of science and engineering into the current practices to improve performance and decrease the risk of injury.” Looking for a willing wheelchair curler to assist at the start of this project, Laschowski contacted the Ontario Curling Association and was directed to wheelchair curling coach Tom Ward, who suggested Ideson. “I contacted Mark and he was very interested in this research,” Laschowski says. “He thought there was a lot of potential in incorporating science and engineering into his sport, and for someone who is obviously very passionate about curling, he loved the opportunity to be involved in this work. I met with him several times, and we discussed different opportunities and projects as well as conducted some experimental testing with him – he’s been a really big help ever since.” “Brock is fan of Canadian winter sports,” says Ideson. “Wheelchair curlers across Canada will benefit from this research. I am always in search of better, more efficient ways to deliver the curling stone, so I was excited to participate in the study. Even if we discover one small change, it’s worth the effort.” Gerry Peckham, Director of High Performance for Curling Canada, agrees. “Curling Canada appreciates research such as this innovative project at the University of Waterloo, especially because of the potential role it will play in better enabling Canadian para-athletes to realize their competitive aspirations,” he says. “Canada has a strong Paralympic program, and if anyone’s going to do this research, it should be our Canadian scientists and engineers,” adds Laschowski about the driving forces behind his research. “We’re looking to further develop this already amazing program in the hopes of continuing Canada’s success on the international podium and then, indirectly, inspiring others to get involved in the sport.” 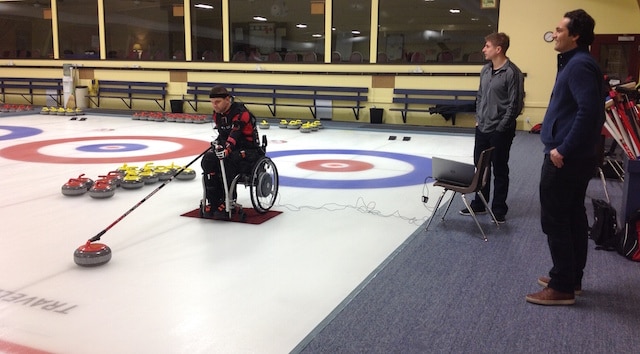