Baseball player’s path to the pros rooted in curling

Curling and baseball may be very different in where and how the sports are played. But Chris Shaw sees plenty of similarities in both of the sports he’s found success in. The consistent catcher and hitter might be making a name for himself playing America’s game, but his path to the Major League comes with a Canadian twist. 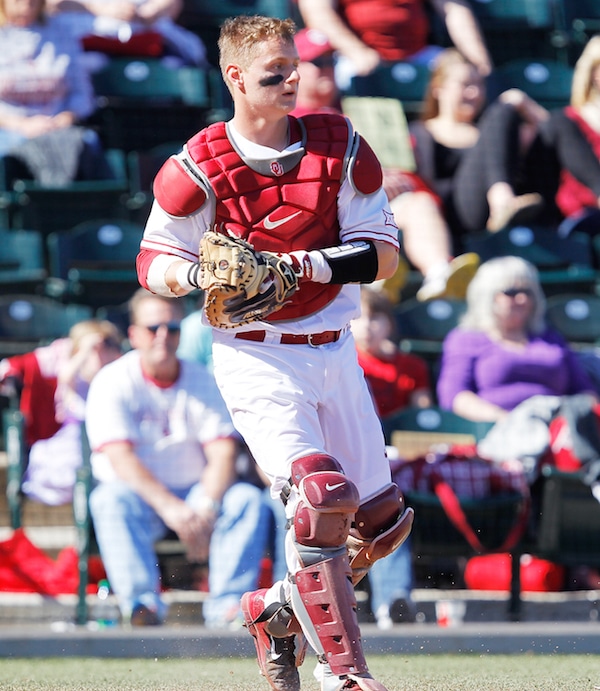 Chris Shaw sees a lot of similarities in his role as a catcher and a skip. Both positions require him to be aware of what is going on around him at all times, including during this Feb. 14 game against Southern Illinois-Edwardsville. (Photo courtesy University of Oklahoma Athletics)

Both sports are field games in which the player has an arsenal of shots to select from. A curler can throw a draw, guard, freeze or hit once they’re in the hack. As a skip, Shaw was faced with the task of not only calling the next shot but also sticking to his guns and believing in the call. It’s not much different from being in the batter’s box and facing the pitcher. “You’ve got to believe in who you are and what you do and you can’t second guess yourself,” Shaw said of crouching into the hack for a shot. “I feel like that translates good into baseball because you can’t second guess yourself when you step in the box. You can’t feel for a swing, you’ve got to know that you’ve paid the price in the cages and you’re happy with what you’ve done.” And Shaw is a player that has plenty to be happy about lately. The Baltimore Orioles used their 15th round pick, 463rd overall, on the Winnipeg catcher who just finished his junior season playing Division 1 baseball with the University of Oklahoma Sooners. The 21-year-old played in 49 games and started as either the catcher or designated hitter in 47 of those. He hit six home runs this season – three of those in four games – and had a slugging percentage of .406, driving in 15 runs. On top of his statistical success, Shaw takes pride in becoming the first Manitoban to play in the NCAA’s Big 12 Conference. This isn’t the first time Shaw’s name has been announced on MLB Draft day. In fact, it’s the third time. Shaw moved to Okotoks, Alta., and played baseball for the Okotoks Dawgs Baseball Academy during his Grade 12 year. After a thriving season with the Dawgs, the Milwaukee Brewers drafted Shaw in the 38th round of the 2012 MLB Draft. While Shaw aimed to one day accept a contract from a professional baseball team, he wanted to improve as a player, mature as an individual, and earn an education. Shaw moved south of the border and played junior college baseball for the Midland College Chaparrals in Texas while working towards a business and finance degree. Shaw was instrumental in helping claim the team’s back-to-back regional championships and earned All-Region and All-Conference status during both seasons. Naturally, the MLB came knocking at Shaw’s door again. The St. Louis Cardinals selected Shaw with its 435th overall pick in the 14th round of the 2014 draft. Shaw declined the offer and continued his schooling in Oklahoma while playing for the Sooners. But after getting a taste of the highest level of college baseball, Shaw started having different thoughts about what he’d do if his name was called at the 2015 MLB Draft. He was ready to sign that piece of paper. “It’s been a long time in the making. I’ve spent a lot of hard work and a lot of long hours and had some tough nights along the way,” Shaw said of the path to being selected for the third time in the MLB. “It felt pretty good to sign that piece of paper because I know it’s been a tough road to get here, but I wouldn’t trade the tough times for anything.” But being drafted by an MLB team is just the start of Shaw’s path to the majors. Shaw realizes the tough work has only started and more will arrive once the Orioles assign him to one of its affiliate teams. Even though he’s chasing his dream of playing professional baseball in the United States of America, nothing takes away from his identity as a Manitoban and Canadian. Shaw competed for the 2011 and 2012 Junior National teams and won the silver medal at the World Junior Championships in Seoul, South Korea, during 2012. “I know I wouldn’t be the same player that I am today without having the experience of wearing Canada across my chest,” Shaw said. “It was an instrumental step for me in my career and I don’t think you have much more pride than playing for your country.” 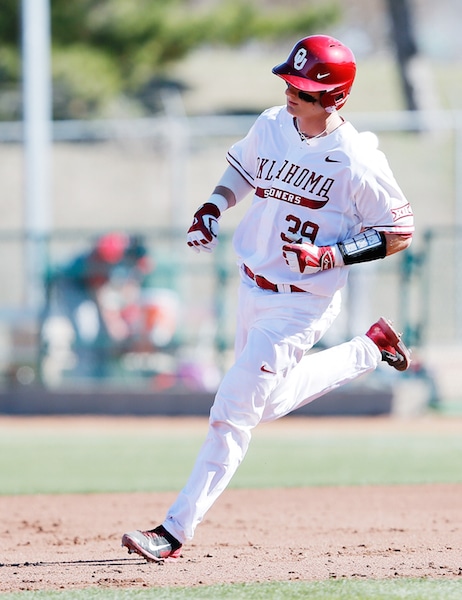 Chris Shaw spent lots of time running the bases during his junior year with the Oklahoma Sooners in the NCAA by racking up 42 hits during the season. Shaw had one hit, one run, and one RBI during his team’s 11-1 win on Feb. 14 against Southern Illinois-Edwardsville. (Photo courtesy University of Oklahoma Athletics)

When Shaw lived in Winnipeg he filled his cold winter months with a Canadian passion: curling. He started playing the sport at a young age with his school friends Derek Harrison, Eric Nugent, Lyndon Walker and coach Russ Hinds. The team competed in Manitoba’s junior curling scene and found success. Shaw, the skip, and his teammates won the bronze medal at the 2010 Manitoba Winter Games, and qualified for the 2011 junior men’s provincial curling championship. During his stretch as a junior curler Shaw often came across an opponent that he got to know not only on the ice, but also on the baseball field. Matt Dunstone, skip of the 2013 World Junior Curling Championship bronze medal team, and Shaw had a bit of a rivalry during their Manitoba junior curling days. More often than not, Shaw found himself on the wrong end of the result when he played against Dunstone. “But I did get him in a zone event in Winnipeg at the Pembina Curling Club. I think I beat him once in my whole career. I beat him one time and that’s all I need. For the rest of my life you can’t take that away from me,” Shaw joked. Dunstone and Shaw both played baseball in different age categories for the Winnipeg South Chiefs. Dunstone is a year younger than Shaw, but he played up an age level with Shaw for a handful of games. That’s when Shaw realized he was quite the talented baseball player, too. In 2012, Dunstone was named Baseball Manitoba’s Midget Player of the Year. Shaw sees similarities in his role as a skip and a catcher. The skip is the leader of the team and responsible for knowing what potential shots can be played and which one is the right call. He needs to know where to put down the broom and how to call the line in order to help his team see success. “I feel like that’s what catchers do too,” Shaw said. “They have to understand the game and the situation and what’s going on. At the end of the day they have to make a decision and you have to live with that decision and I feel like that’s something you have to do as a skip as well.” 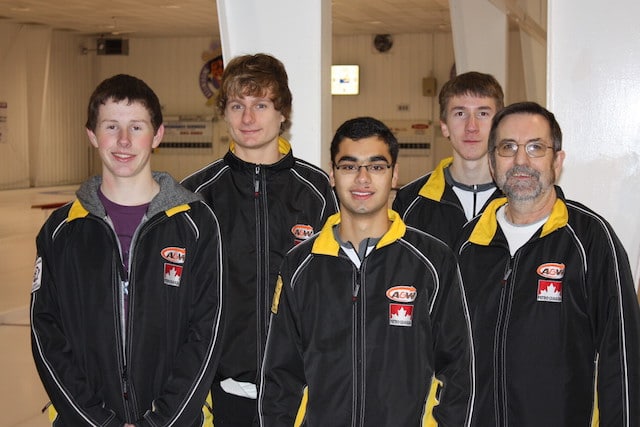 Curling has also given him some trophies and medals, most specifically his bronze medal from the 2010 Manitoba Winter Games. He recalls playing for team Winnipeg Gold and the female curling team being represented by 2012 and 2013 M&M Meat Shops Canadian Junior Curling Championship finalist Shannon Birchard. He remembers meeting all sorts of Manitoba athletes while at the event, and he certainly remembers defeating the Central team 7-4 in the bronze medal game. A gold medal would have been nice, but a 5-3 loss in the semifinal – to Dunstone of all teams – ended that pursuit early. When he looks back to that game, he’ll be reminded of Dunstone, who is another Winnipeg athlete from Charleswood making a name for himself in a different sport. Shaw has a lot of respect for the fire and passion that Dunstone has as an athlete. Yes, he might have lost more than he won while calling shots against Dunstone, but no matter what, Shaw will always be able to look back on that one time he beat the Canadian champ at his own sport in the Pembina Curling Club.