Canada through to qualifying round at World Mixed

Team Canada will move on to the qualifying round at the World Mixed Curling Championship in Berne, Switzerland, after defeating Norway 8-4 in the final game of the round robin on Thursday afternoon. 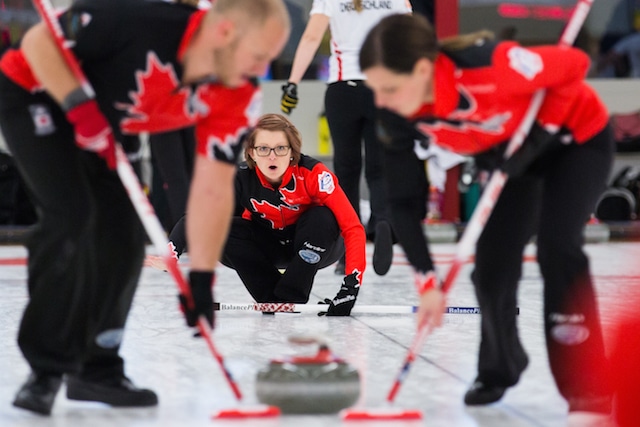 The win puts Canada’s Max Kirkpatrick, Jolene Campbell, Terry Haichert, Teejay Haichert and coach Ron Meyers, of Swift Current, Sask., into third place in Group B, and guarantees them a shot at making it to the quarter-finals on Friday. “Feels like we really starting to peak right now,” said Kirkpatrick after the game. “That was our best game of the week. So hopefully we can just keep that going into the weekend now.” “Our goal when we came here was to make the playoffs,” he said, when asked about making it to the qualifying round. “So we’ve just got to get their first, make sure we’re in the (playoff) mix, and we are.” On Thursday afternoon, Canada and Norway exchanged singles and then doubles to go into the break tied 3-3. Canada then played a perfect fifth end, leaving Norway with a difficult draw against two behind a guard. Norwegian skip Steffen Walstad was just light and Canada stole two. In the sixth, with lots of rocks in play, Norway was held to only one. In the seventh, again with lots of rocks in play, Norway made a nice tap in to lie one, but Kirkpatrick was able to come through a port and for the takeout to count one. Canada was up 6-4 heading into the last end. In the eighth end, with both teams running out of time, Canada was able to get rocks behind centre guards and Norway was left with a nearly impossible hit to try and get the two points they needed. Walstad was unable to make the shot and Canada stole one and won the game. “I think we’ve been getting better as the week went on,” said Kirkpatrick about the team’s growing confidence. “We didn’t have much ice in Canada to practice on before we got here. We’re just getting our legs under us a bit more and keep getting stronger, so hopefully we can keep that up. We’re figuring out the ice a bit more now, too. Not making as many calling errors and sweeping mistakes, so it’s all coming together right now.” In the qualifying round, Canada will play a crossover game against a team from one of the other pools, as yet to be determined. Action gets underway at 8 a.m. ET on Friday. This is the first time a world championship has been staged in the traditional mixed (two male, two female players) format. It replaces the European Mixed Championship that had been played for the past few seasons. A total of 36 teams, split into four pools of nine, will contest the world championship. The teams will play a round robin within their pool, with the top three teams from each pool reaching the playoffs, which begin Friday, Sept. 18. The pool winners will be seeded directly into the quarter-finals, while the second- and third-place teams will play crossover playoff games. The semifinals, along with the gold- and bronze-medal games, are scheduled for Saturday, Sept. 19. Results, statistics, news and photos from the World Mixed Curling Championship 2015 can be seen here on the WCF’s official event website: https://worldcurling.org/wmxcc2015.