Canadian dreams of claiming gold at the inaugural World Mixed Curling Championship were dashed on Friday in Berne, Switzerland. 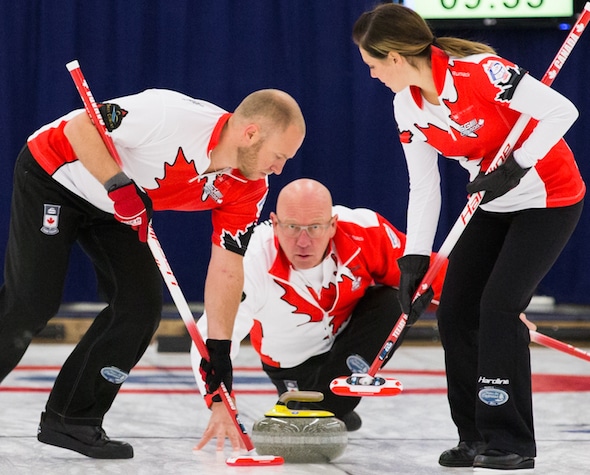 The Max Kirkpatrick-skipped Canadian team from Swift Current, Sask. — third Jolene Campbell, second Chris Haichert, lead Teejay Haichert and coach Ron Meyers — bowed 8-3 to Russia’s Alexey Tselousov in the quarter-final Friday at Curling Bahn Allmend, the host rink for the first four-player mixed world championship. The Russians will play Sweden’s Rasmus Wrana in one semifinal on Saturday at 4 a.m. ET, while China’s Ji Yansong takes on Norway’s Steffen Walstad in the other. The semifinal winners will play for gold, while the losers will play for bronze, at 9 a.m. ET. The loss, though, wasn’t enough to dampen the spirits of Kirkpatrick, who was making his international debut for Canada. “Oh, it was fantastic,” he said. “Everything was wonderful — the people were great, the ice was great, a really fun event.” The Canadians opened the playoffs earlier on Friday with a 7-4 triumph over Italy’s Denise Pimpini — a stolen deuce in the fourth end was key to the victory. Against the Russians, Canada had control early thanks to stolen points in the second and third ends to take a 2-0 lead. But Russia would head into the fourth-end break on a high thanks to a go-ahead three-ender — the pivotal point in the game, according to Kirkpatrick. “We were up playing the fourth end, and I missed both my shots to give them three, and I think that was the real turning point,” he said. “We had them chasing us, and if we keep the pressure on, we’d be fine because we were curling really well. But after that, they jumped up with the three, and we were chasing them.” Canada was held to a single in the fifth end to tie the game 3-3. Russia would blank the sixth, and then deliver the killing blow in the seventh — a score of five that prompted handshakes and sent Canada to the sidelines. They’re good players; they throw the rock really nice,” said Kirkpatrick. “It’s a good team — no shame in losing to them.” A total of 36 teams, split into four pools of nine, competed in the world championship. The teams played a round robin within their pool, with the top three teams from each pool reaching the playoffs. The pool winners were seeded directly into the quarter-finals, while the second- and third-place teams played crossover playoff games. Results, statistics, news and photos from the World Mixed Curling Championship 2015 can be seen here on the WCF’s official event website: worldcurling.org/wmxcc2015. Both playoff draws on Saturday will be streamed live at www.swiss-sport.tv/events/16-world-mixed-curling-championship-2015