Not too long ago, the AMJ Campbell Shorty Jenkins Classic in Brockville, Ont., was the premiere event in which most of the best teams kicked off their seasons. Today, however, we’re already into the fourth week on the World Curling Tour, and we’re finally getting to the famous Brockville event… but it’s a few kilometres up the river in Cornwall. 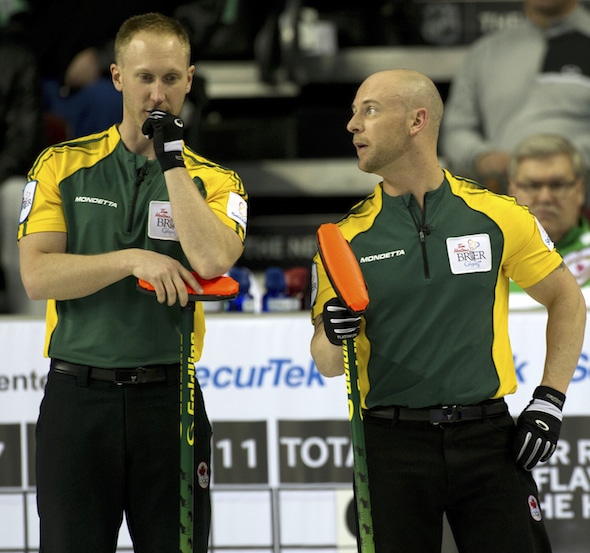 Due to compressor issues at the Brockville Country Club, the bonspiel had to be relocated at the last minute; changing all the details with just a few weeks; notice. But it appears organizers pulled it off, and the typical roster of top-tier teams showed up all the same. The Two Brads — Jacobs of Sault Ste. Marie, Ont., and Gushue of St. John’s — headline a 24-team field, playing for a share of $44,400. Currently ranked #2 and #3 in the world, respectively, it’s actually Gushue who has the early lead in this year’s Canadian Team Ranking System standings, following a victory in the Oakville Stu Sells Tankard, and a runner-up finish at last week’s Grand Slam event in Paradise, N.L. Jacobs, on the other hand, is the two-time defending champ at the Shorty and is looking to cash in at the event he’s owned in recent years, albeit in a completely different environment. Then again, there’s no shortage of participating teams who have “owned” the Shorty. Glenn Howard (Penetanguishene, Ont.) is a three-time Shorty champ, while Toronto’s John Epping won the event each of the two years before Jacobs. And of course, there’s always a healthy dose of international flavour. Sweden’s Niklas Edin, Scotland’s David Murdoch and Switzerland’s Sven Michel have all found their way to Cornwall, and will add some foreign firepower to this classic event. The women’s side is a 12-team event featuring Coldwater, Ont.’s Sherry Middaugh, Caledon, Ont.’s Alli Flaxey and Charlottetown’s Suzanne Birt. Elsewhere in the country, many of the top western teams are playing at the HDF Insurance Shootout in Edmonton. Hometown favourite Brendan Bottcher (CTRS #7) will face the likes of Charley Thomas (Calgary), and Mick Lizmore (Edmonton). The 16-team event also features two Scottish teams in Tom Brewster and Kyle Smith, and a Korean entry skipped by Soo-Kyuk Kim. It’s the women’s event in Edmonton, however, that is the bigger draw. The 24-team field is playing for a pot of $27,000 and some major CTRS points, due to the strength of field. Edmonton’s Val Sweeting and Calgary’s Chelsea Carey are two of the notables, but with Saskatoon’s Stefanie Lawton, Calgary’s Shannon Kleibrink and Edmonton’s Kelsey Rocque in the event (just to name a few), there are more than enough opportunities to have your championship aspirations derailed. In any case, the weekend that used to be the kickoff to the season, will now see some top teams in mid-season form.