Winnipeg skip Reid Carruthers is used to facing the top men’s teams in the world. This weekend at the Canad Inns Mixed Doubles Classic in Portage la Prairie, Man., however, he discovered that the women can be just as tough. 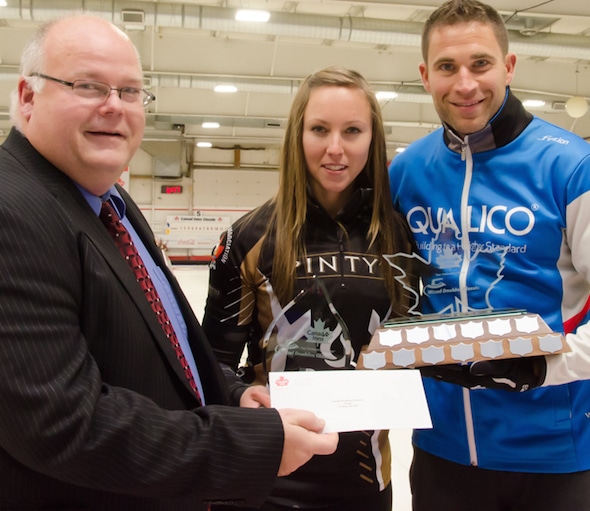 “Playing against the big-name teams is always a challenge in men’s competition,” he said. “Now we have to curl against the top-ranked women’s curlers, too. It makes you appreciate even more how talented they are! They don’t miss!” Even though the event featured some of the biggest names in the sport, the learning curve was still pretty steep. “I’m amazed at how complex the strategy was, and the skill level required to be successful,” Carruthers said of the 18-team event. “I absolutely loved it!” Carruthers and partner Krysten Karwacki reached the semifinals by beating Curling Canada Mixed Doubles Program Manager Jeff Stoughton and his partner Kaitlyn Lawes, and then lost to some other big names in Jennifer Jones and her husband Brent Laing. In the other semifinal, John Morris and Rachel Homan took down Derek Samagalski and Sherry Just. 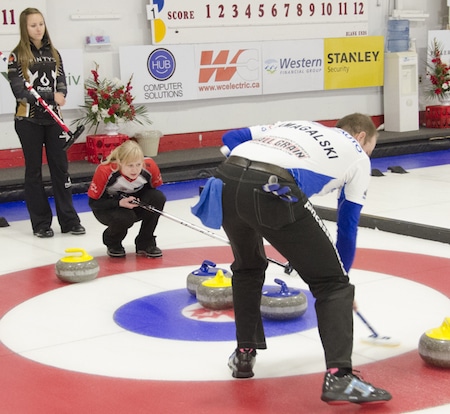 Derek Samagalski, right, sweeps a rock while getting directions from partner Sherry Just during their semifinal loss to Homan and Morris.

Morris and Homan won the final 10-7, deafeating Laing, and his stand-in partner Lawes, as Jennifer Jones was unable to play the final due to work commitments. Homan and Morris will share a $5,000 paycheque while Laing and Jones took home $3,400 for their runner-up finish. As more of these events occur, points will be awarded similarly to the Canadian Team Ranking System, or the World Curling Tour Order of Merit. For many of the athletes, it was the first time playing the different format. Carruthers said they had to figure a lot out as they went along. “Communication is important in regular curling but even more so in mixed doubles,” he said. “You are now performing four jobs with one partner so you need to be sharp.” The Canad Inn’s Mixed Doubles Classic was the first event of its kind, but there is no doubt that more are on the way. Another is scheduled for mid-November in Oshawa, Ont., conveniently following the Grand Slam of Curling event in that city. The Wall Grain Mixed Doubles Classic will also include some of the game’s biggest names. Looking ahead to the weekend, many of the women will be sticking around Portage for the next Canad Inn’s event, the Ladies Classic. Team Jennifer Jones (two-time defending champions of the event) will be back together as a whole squad, with Dawn McEwen coming off of her “maternity leave.” Winnipeg’s Kristy McDonald and Saskatoon’s Stefanie Lawton are also in the 24-team mix. Calgary’s Chelsea Carey and Lethbridge, Alta.’s Kalynn Park will be playing in the Red Deer Curling Classic following their appearance at the Portage mixed doubles event. The 28-team event also features 2015 world champion Alina Pätz of Switzerland. The men’s teams are split between the Red Deer event, and the Challenge Chateau Cartier in Gatineau, Que.. Top-ranked CTRS squad Team Brad Gushue will look to continue its hot season in the 32-team event.