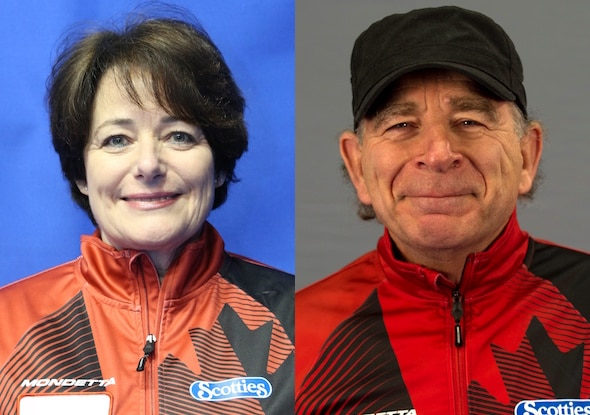 Wendy Morgan, left, and Earle Morris were honoured by the Coaching Association of Canada on Friday night.

Ottawa’s Earle Morris and Wendy Morgan of Burlington, Ont., were among 62 coaches winning 2015 Petro-Canada Coaching Excellence Awards. The prestigious awards recognize coaches whose athletes have excelled at world championships, Olympic and Paralympic Games, and at the Special Olympics World Games. This past spring, Morris coached the Pat Simmons team from Calgary to gold at the Tim Hortons Brier in Calgary and then followed up with a bronze medal at the Ford World Men’s Championship in Halifax. Morgan, meanwhile, replaced the legendary Janet Arnott as coach of Team Jennifer Jones (Winnipeg), and helped the team capture the Scotties Tournament of Hearts in Moose Jaw, Sask., followed by a silver medal at the World Women’s Championship in Sapporo, Japan. “Earle and Wendy deserve every accolade they receive,” said Gerry Peckham, Director, High Performance, for Curling Canada. “The efforts of a curling coach often go unappreciated by curling fans, but players and their fellow coaches know what kind of work goes on behind the scenes to take a curling team to a higher level of success. I’m extremely happy to see Earle and Wendy recognized for their efforts.” Hosted by the CAC, the gala recognizes Canada’s most dedicated, inspiring, and successful coaches. Annually, award recipients are honoured for exemplifying the values and competencies of the National Coaching Certification Program (NCCP) and for their influence in positively shaping the Canadian sport community. The event was emceed by multi-Paralympic Games medalists Elisabeth Walker-Young and Stephanie Dixon, respectively Chef de Mission and Assistant Chef de Mission at the Toronto 2015 Parapan Am Games. “The CAC is proud to recognize these coaches for their passion and dedication to sport and for making a positive impact on athletes and communities across Canada,” said Lorraine Lafrenière, CEO of the CAC. “The Year of Sport has been a great year for Canada and tonight was an opportunity to celebrate their contributions to these successes, both on and off the field of play. I am proud to congratulate all of our 2015 award recipients.” “It is the hard work of Canadian coaches that help fuel our athletes’ dreams. Congratulations to each recipient,” added Marc Goodman, director, loyalty and strategic partnerships, Suncor. “We are delighted to celebrate their dedication to the athletes and sport.” For a full list of the winners, and more about the awards, go to coach.ca