The Manitoba husband-and-wife duo of Mike and Dawn McEwen stole their way to a 6-4 win over Ontario’s John Epping and Lisa Weagle to claim the trophy at the Wall Grain Mixed Doubles Classic at the Oshawa Curling Club on Tuesday afternoon. 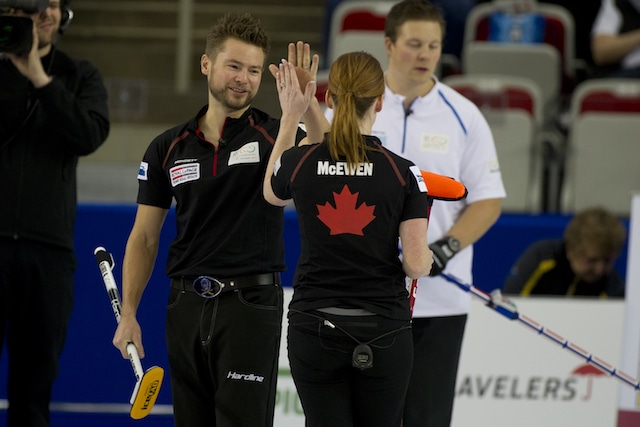 Epping and Weagle took a 3-1 lead after Weagle made a spectacular in-off takeout for three points in the second end, but the McEwens were able to steal single points in four ends on their way to victory. “There were so many great curlers in this event, and so many high-quality shots were made,” said Dawn McEwen about how the curlers are adapting to the relatively new mixed doubles format. “It’s a bit of a difference getting up and sweeping a rock right away, and that would probably be the biggest difference for everyone. But across the sheets there were so many great shots being made that obviously whatever everyone was doing worked out pretty well for them.” Other teams taking part in the Oshawa event included a who’s who of high-performance curlers, including, among others, Rachel Homan and John Morris, Val Sweeting and Brad Gushue, Kaitlyn Lawes and Marc Kennedy, Jennifer Jones and Brent Laing, as well as Kalynn Park and Charley Thomas, Canada’s representatives at the 2015 World Mixed Doubles Championship in Sochi, Russia. The event followed hot on the heels of the Grand Slam of Curling’s The National, which wrapped up Sunday with victories for Gushue and Homan. Players from many of the competing teams stayed in town to take part in this second major mixed doubles event of the season. A few weeks ago, Homan and Morris teamed up to win the Canad Inns Mixed Doubles Classic in Portage la Prairie, Man., defeating Laing and Lawes (sparing for Jones) for the trophy. Another mixed doubles event is planned for Toronto in March, with at least $10,000 in prizes. Aside from $23,000 in prize money, the McEwen duo also receives Curling Canada funding to help raise the level of competition in this country leading up to the team selection for the debut of Winter Olympics mixed doubles curling in 2018 at PyeongChang, South Korea. “It’s really early, and we’ve only had two events now with the ‘household names’,” said Jeff Stoughton, Curling Canada’s program manager for mixed doubles, who oversaw the event. “I think they’re really learning it and enjoying it. And it looks like they’re really getting into it, and that’s all we can ask for.”