Mike Callaghan and his Mayflower Curling Club rink are keeping pace with the leaders at the 2015 Travelers Curling Club Championship.  The Nova Scotia men’s champions improved to 2-0 with a 9-2  win over Nunavut on Tuesday evening. “The boys played really good today. Our vice Logan (Ward) played fantastic today,” said Callaghan. “We’re pretty happy to be 2-0 to start.” 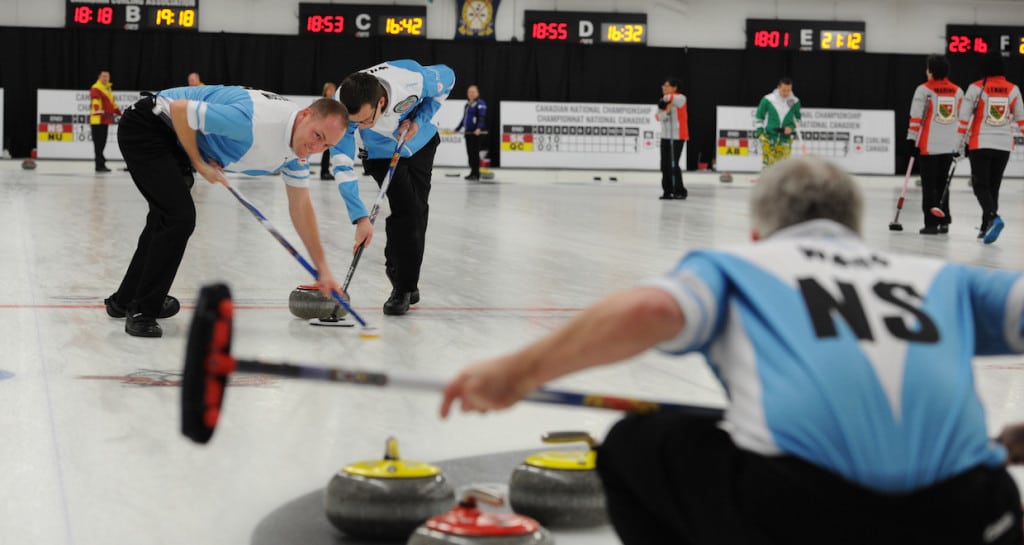 Nova Scotia was in control early in the game but Nunavut’s Ed MacDonald’s rink presented a challenge in the fourth end when he forced Callaghan to hit against three Nunavut counters. The Bluenosers grabbed the single point to extend their lead to four points at the fourth end break. Nova Scotia held Nunavut to a single in the fifth end and then grabbed another deuce in the sixth end before the team from the North conceded after seven ends. The win moved the Halifax rink to the top of Pool A to join undefeated Newfoundland & Labrador. The two teams will clash Wednesday at 12:30 p.m. “I don’t know if it’s nerves but I do know we still need to play better tomorrow to get us into playoff contention,” Callaghan added. Nunavut drops to 0-3. Elsewhere in men’s play, British Columbia and  Northern Ontario remain undefeated in men’s Pool B action. Saskatchewan bounced back with two wins on Tuesday to improve to 2-1. Yukon, PEI, Alberta and Manitoba all have one loss. In women’s play, Ontario and PEI stayed perfect with two wins each on Tuesday to lead Pool A. British Columbia’s Leanne Andrews made a quiet hit-and-stick around corner guards to score a thrilling three points in the eighth end to defeat Manitoba 5-4 in a key Pool B match up on Tuesday evening. Northern Ontario sits atop Pool B at 2-0.  Alberta, British Columbia, Manitoba, Saskatchewan and Nova Scotia all have one loss. The 14 men’s and 14 women’s teams are split into two seven-team round-robin pools. After a single round-robin, the top three teams in each pool will make the playoffs. The first-place teams will be seeded directly into the semifinals, Friday, Nov. 27, at 6:30 p.m. (all times Eastern). The second- and third-place teams will meet in crossover quarter-finals Friday at 1:30 p.m, with the winners moving into the semis. The gold- and bronze-medal games are set for Saturday, Nov. 28, at 10 a.m. Selected games from the 2015 Travelers Curling Club Championships will be live-streamed at www.curling.ca/2015travelers/ Scores and standings from the event will be available at www.curling.ca/scoreboard/. For draw times, team lineups and other event info, go to: www.curling.ca/2015travelers/ (Story by Darren McEwen)