Prince Edward Island and Newfoundland and Labrador have their first ever Travelers Canadian Curling Club Championship titles. Lisa Jackson’s rink out of the Cornwall Curling Club in P.E.I defeated Ontario 5-3 in the women’s final. Andrew Symonds of St. John’s got past Manitoba 6-4 in the men’s final. P.E.I. took control of the women’s final with a steal of one in the sixth end. Ontario’s Tina Mazerolle came up light in the seventh end on a draw for two, putting P.E.I. in the driver’s seat coming home in the eighth. “We just wanted to keep it open so we had a chance to win it and hopefully I had a shot,” Jackson said. “It feels amazing to be able to bring this banner back to the Island.” National championships are not unfamiliar territory for Jackson’s team, but it was a first for all of them in curling. Lead Jodi Murphy and second Melissa Morrow have both represented the Island at national soccer championships while third Carolyn Coulson has been to a national bodybuilding championship. “This ranks the top for all of us,” Jackson said of her team’s list of sports accomplishments. This is the first Travelers title for P.E.I. after the province’s women’s team finished as silver medalists in Halifax at last year’s Travelers final. 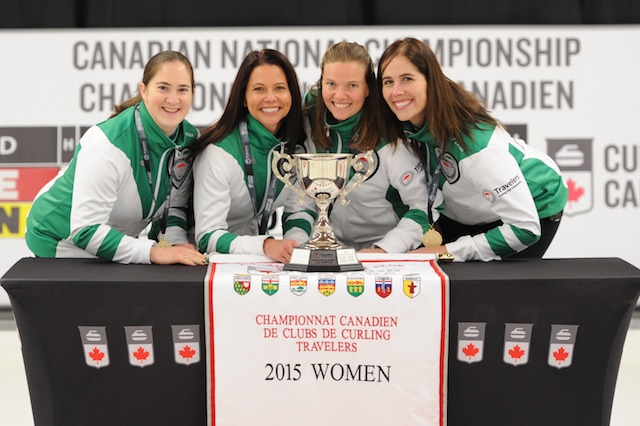 History was also made in the men’s event. For Newfoundland and Labrador, the win means everything to skip Andrew Symonds. “Absolutely unbelievable. We played a pretty good game today as a team and Manitoba gave us a great match,” the skip said after receiving his gold medal. Newfoundland and Labrador had the pressure on Tyler Drews and his Manitoba’s team for much of the game. Symonds scored a big three points in the third end but watched as his team’s advantage shrank in the fifth end thanks to a steal by Manitoba. Symonds threw a big-weight double to force Manitoba into a lone point in the seventh end. Manitoba applied pressure in the eighth end, leaving Newfoundland and Labrador a quiet-weight inturn hit-and-stick for the win. “I think it was the first time all week we had to play that kind of shot,” said Symonds. “We were a little nervous with the two (Manitoba) counters in the back.” The St. John’s skip has curled with his third Mark Healy for the last decade. The two were joined by second Cory Ewart, who represented Newfoundland and Labrador at the 2006 Brier, four seasons ago. Keith Jewer started throwing lead stones for the Re/Max Centre team two years ago. The week was filled with emotional moments for the men’s champions. Six days before winning his province’s first Travelers Curling Club Championship, Symonds says he was overwhelmed when he opened his hotel room door. “Walking into the hotel to see this (jacket) with my name on it was a huge goosebumps moment. The event itself is so fantastic. When we go back home I’ll certainly be telling all the guys this is an event you want to get to,” the Newfoundland and Labrador skip said. “This, for everyone here, was our Brier or our Scotties. It’s an incredible accomplishment just to get here, and to come here and win it is just surreal. I was pretty close to shedding some tears after that last shot.” 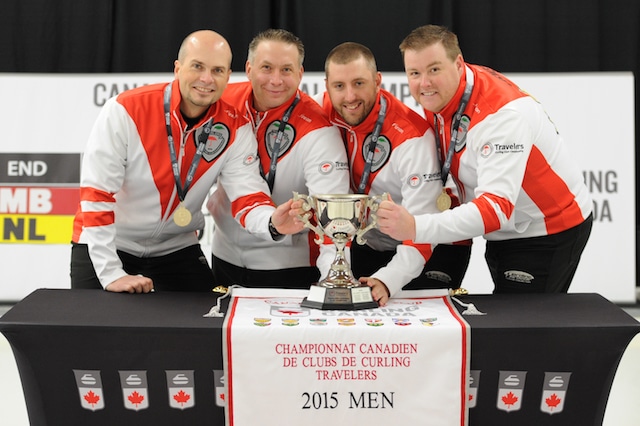 This is the first time Newfoundland and Labrador has brought home a championship banner from a Travelers Canadian Curling Club Championship. In the bronze medal games it was Alberta’s Nanette DuPont rink who captured third place over Northern Ontario’s Kathie Jackson in women’s play. Team Quebec’s Stephane Lamy’s rink defeated Nova Scotia’s Mike Callaghan to win bronze in the men’s event. This was the seventh edition of the Travelers Curling Club Championship. The teams completed a week-long round robin at the Ottawa Hunt and Golf Club offering up Canada’s top club curlers an elite national championship experience. Curling Canada’s 14 Member Association teams (from 10 provinces, three territories and Northern Ontario) battled to make the playoff rounds. Each team is allowed only one player who has played in a provincial/territorial Juniors’, Men’s (Brier), Women’s (Scotties) or Seniors’ championship in the current or previous four curling seasons, or participated in a Grand Slam event in the current or previous four curling seasons. As well, no player on the teams can have played in a Canadian Juniors, Men’s, Women’s or Seniors national championship in the current or previous four seasons.