Learning to curl in Kelowna, B.C. – with Kelly Scott

She’s a Canadian and world champion curler, and an all-star mom – and now Kelly Scott can add avid Learn-to-Curl instructor to her already glowing resume. In early November, Scott invited students from her son’s (Nash, 7 years old) elementary school in Kelowna, B.C., to come out and give curling a try – for free. 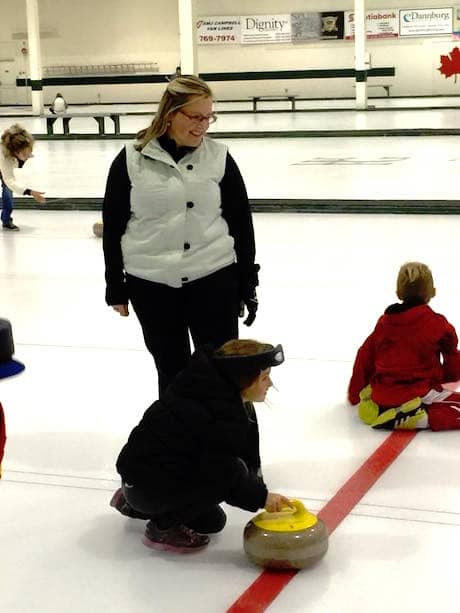 “It was a pretty informal invite,” she says. “We posted it on Facebook and we weren’t exactly sure who would come.” The turnout was overwhelming, with approximately 55 young kids showing up to try out curling, many for the first time. “The school had already (participated in) Curling Canada Rocks & Rings a few times so most of the students were familiar with the game,” she says. “I really felt like I needed to do something to get them on the ice for real this year. I have a wonderful relationship with our club manager, Jock Tyre, and our club was really welcoming of bringing all of these kids in to give it a try. Everyone recognized that this is the future of our game, even if it meant scraping the ice after we were all done. We have a 12-sheet curling club here so there is lots of room to bring new curlers down and get ice time. We are very lucky that way.” Young curlers had the opportunity to try out all aspects of the game. They started by throwing rocks back and forth to each other at a short distance, and then learned to slide and throw rocks the length of the sheet with some sweeping involved. Some students used sliders and tape, while others opted for just their clean running sneakers. “Everyone was having so much fun, after two hours we had to shut it down, but the kids would have kept going – they were loving it!” says Scott. This wasn’t the first time the Kelowna Curling Club has welcomed new curlers, in fact at the beginning of the season they hosted a Try Curling Open House. The Club also offers three leagues for new or novice curlers, three nights a week. What advice would Scott give to other avid curlers looking to get a few more young people out on the ice? “I think I would have more volunteers,” she says with a laugh. “With just me running around, it was pretty hectic.” The success of Learn-to-Curl days like this one cannot be understated. During the 2014-2015 season, the New Brunswick Curling Association launched a “From the Gym to the Ice” program aimed at getting kids who had tried curling in the gym onto the ice, similar to Scott’s initiative in her home club. The results were impressive, and the numbers of young kids who registered in curling increased. This year, New Brunswick will be hosting its provincial Little Rock Jamboree in an arena in order to accommodate the higher number of participating teams. “Parents were asking me how to register their kids for curling,” explained Scott of the success of her own Learn-to-Curl day. When asked if she would do it again, Scott’s answer was simple. “I definitely think this is something I need to keep doing. We had so much fun, seeing all the smiles from all of the kids when they were out on the ice was really great.”