It didn’t quite make up for last year in Camrose, Alta., but it was a small measure of revenge for Rachel Homan and her top-ranked team from Ottawa. 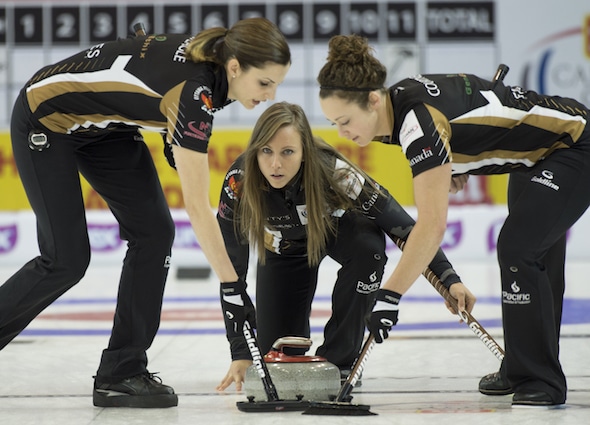 Homan lost to Edmonton’s Val Sweeting in the final of the 2014 Home Hardware Canada Cup, presented by Meridian Manufacturing, in Camrose Alta., so it was only fitting that the draw for the 2015 event, which got underway on Wednesday morning at Revolution Place in Grande Prairie, Alta., had the two teams going head-to-head. And this time, it was no contest. Homan, backed up by third Emma Miskew, second Joanne Courtney and lead Lisa Weagle, made an open hit to score four in the first end, stole one in the second, and put it in cruise control from there for an 8-3 triumph to open round-robin play. “We don’t really think about it that way (revenge for last year’s loss in the final),” said a smiling Homan, a two-time Scotties Tournament of Hearts champion who is the runaway leader in the 2015-16 Canadian Team Ranking System standings. “I mean, they’re a tough competitor, and just some mistakes that put some extra points on the board for us. We missed a couple shots and it looked a little bit scary in the middle of the game there, but the more we get to play on this ice, the better we’ll be. Definitely a nice way to start the Canada Cup, for sure.” The men’s and women’s champions here not only win the top prize of $14,000, they also advance directly to the 2017 Tim Hortons Roar of the Rings Canadian Curling Trials — conveniently located in Homan’s hometown. “That would be amazing,” said Homan. “We’re excited that the Trials are in our hometown — now we have to get there.” The winning men’s and women’s teams also qualify to play for Team North America at the 2016 World Financial Group Continental Cup, presented by Boyd Gaming, Jan. 14-17 in Las Vegas.

In other morning-draw women’s play, Sherry Middaugh (Coldwater, Ont.) opened with a big 7-2 win over reigning Scotties champ Jennifer Jones of Winnipeg. Tied 1-1 through three ends, Middaugh scored a fourth-end deuce and then put the game out of reach with stolen single points the next three ends. “You know what? The ice has great speed, it has the curl we were expecting, the rocks are great, so we love this ice,” said Middaugh. “We were fortunate — it got a little messy in a couple ends with some half-shots, but Jen struggled a bit to help us out. But you never know what the first game is going to be like. You try to play a little simple to get that comfort level, so we’re happy to be 1-and-0.” In the other morning women’s tilt, two-time world junior champ Kelsey Rocque of Edmonton made a last-rock takeout in the 10th end two score a deuce for a 7-6 triumph over Kristy McDonald of Winnipeg. In men’s play, meanwhile, two-time defending Tim Hortons Brier champ Pat Simmons and his team from Calgary picked up deuces in the third and fifth ends and pulled away for a 7-3 win over defending men’s champ Mike McEwen of Winnipeg. Also, Toronto’s John Epping scored three in the 10th for a 7-5 victory over Saskatoon’s Steve Laycock. The 2015 Home Hardware Canada Cup continues with draws today at 1:30 p.m. and 6:30 p.m. (all times MST). TSN/TSN2 and RDS2 will provide complete coverage of the Hardware Canada Cup. Click here for the complete schedule The Home Hardware Canada Cup format calls for the men’s and women’s teams to play a three-day round robin, with the first-place teams advancing to their respective finals on Sunday, while the second- and third-place teams meet in semifinals on Saturday, after any required tiebreakers, to determine the other finalists. For ticket information for the 2015 Home Hardware Canada Cup, go to www.curling.ca/2015canadacup/tickets/ This story will be posted in French as soon as possible at www.curling.ca/2015canadacup/?lang=fr