Mike McEwen took care of his own business, and then he watched gratefully as Kevin Koe did him a favour on an adjacent sheet on Saturday morning at Revolution Place in Grande Prairie, Alta. The end result is that McEwen and his Winnipeg team — third B.J. Neufeld, second Matt Wozniak and lead Denni Neufeld — are one victory away from successfully defending their title at the 2015 Home Hardware Canada Cup, presented by Meridian Manufacturing. McEwen cruised to a 10-4 win over Saskatoon’s Steve Laycock (2-5) to close out round-robin play on Saturday morning to finish with a 5-2 record. One sheet over, Koe was dispatching reigning Tim Hortons Brier champion Pat Simmons 7-4 in an all-Calgary battle. The results left McEwen and Koe tied at 5-2, but McEwen got the bye to the 5 p.m. MT final thanks to his 5-4 round-robin win over Koe. “Even if I don’t sleep well tonight, there’s plenty of time to nap on Sunday, right?” said a smiling McEwen, who will carry a three-game win streak into the final in search of back-to-back Home Hardware Canada Cup titles, following last year’s win in Camrose, Alta. “I really like how the guys are playing. The ice has matured, it’s gotten better every day, so we’re really looking forward to Sunday. I know it’s higher stakes than last year (with a Tim Hortons Roar of the Rings Canadian Curling Trials berth on the line), but I think it’ll feel pretty equal to last year.” McEwen took control early, scoring four in the second end, and never looked back against Laycock, and will carry plenty of momentum into the gold-medal game. “What happened yesterday for us (two solid wins) carried through to today for us,” said McEwen. “It was really nice not to have a letdown against a team that was playing spoiler. We had a great game, we did our part, and things kind of worked out on the other sheet for us.” Behind McEwen, three teams are still alive in the bid to win not only a $14,000 top prize, not only a trip to Las Vegas to be part of Team North America for the 2016 World Financial Group Continental Cup, presented by Boyd Gaming Jan. 14-17, but the biggest prize of all: a trip to the 2017 Tim Hortons Roar of the Rings in Ottawa. Koe will play in Saturday’s men’s semifinal (6:30 p.m. MT); his team trailed 3-1 through six ends, but cracked a three-ender in the seventh to turn the game around. “It was a bad start for us; they came out and played really well and we kind of weathered the storm and some really big breaks went our way,” said Team Koe second Brent Laing. “Ten ends is a long time, crazy things happen in big events in curling, and we’ve been on both sides of games like that. A big part of winning that game is the afternoon off and getting some rest. Every game has been a grind, so the afternoon off is big for us.” 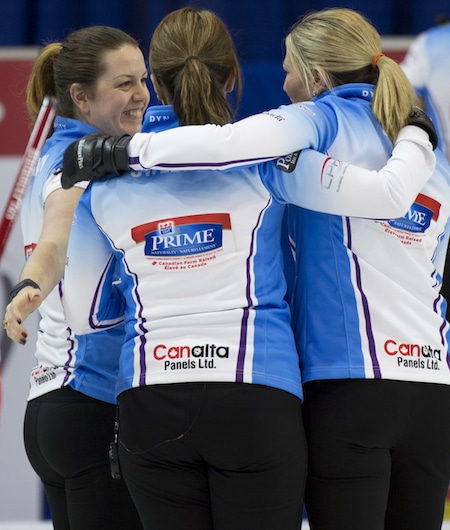 Team Koe’s opponent will be decided in a third-place tiebreaker, Saturday at 1:30 p.m., between Simmons and Toronto’s John Epping. Epping came up big on Saturday morning with a 9-4 win over Winnipeg’s Reid Carruthers (2-5), scoring five in the sixth end to keep his playoff hopes alive. “I’m happy all the way around,” said Epping. “Coming into the week, we just wanted to be around on the weekend and give ourselves a chance to win this. It’s nice to finish with a bang, get off the ice a couple ends early, and give ourselves a bit of rest because it could be a long day.” In the other men’s game, Brad Gushue of St. John’s turned back Brad Jacobs of Sault Ste. Marie, Ont., 8-5. Both teams finished out of the playoff at 3-4. Meanwhile, defending women’s champ Val Sweeting of Edmonton is still alive in her quest for back-to-back Home Hardware Canada Cup titles. Sweeting, backed up by third Lori Olson-Johns, second Dana Ferguson, lead Rachelle Brown and coach Garry Coderre, turned back Sherry Middaugh (Coldwater, Ont.) 7-3 in women’s tiebreaker action on Saturday morning. The win lands Team Sweeting in Saturday’s 1:30 p.m. semifinal against reigning Scotties Tournament of Hearts champion Jennifer Jones of Winnipeg. A fifth-end deuce, followed by a steal of one in the sixth, were the deciding factors in Sweeting’s victory. “We’re pretty happy — obviously, you like to avoid tiebreakers, but we’re happy to still have a chance. It was a good battle out there today and we were fortunate to come out on top,” said Sweeting, who lost to Jones in last season’s Scotties final in Moose Jaw, Sask., and lost again to Jones, 9-3, to close out the round robin here on Friday night. “Last night, I thought I was throwing them pretty close and not getting anywhere close to the result we wanted, and kind of looking like a fool. But that’s OK. They played well, they’re a really good team, and we’re going to have to be sharp.” The semifinal winner will take on Ottawa’s Rachel Homan in the women’s final on Sunday at 11 a.m. Teams Simmons and Jones have already qualified to be part of Team North America at the World Financial Group Continental Cup by virtue of their victories at the Tim Hortons Brier and Scotties Tournament of Hearts last season. So if they win in Sunday’s here, the Team North America berths will go to the highest non-qualified teams on the Canadian Team Ranking System — Gushue on the men’s side and Homan on the women’s side. TSN/TSN2 and RDS2 will provide complete coverage of the Hardware Canada Cup. Click here for the complete schedule For ticket information for the 2015 Home Hardware Canada Cup, go to www.curling.ca/2015canadacup/tickets/ This story will be posted in French as soon as possible at www.curling.ca/2015canadacup/?lang=fr