Canada’s world-No. 1-ranked wheelchair curling program will begin its push to the 2018 Winter Paralympic Games with a familiar lineup, albeit with an eye on the future, it was announced today by Curling Canada. 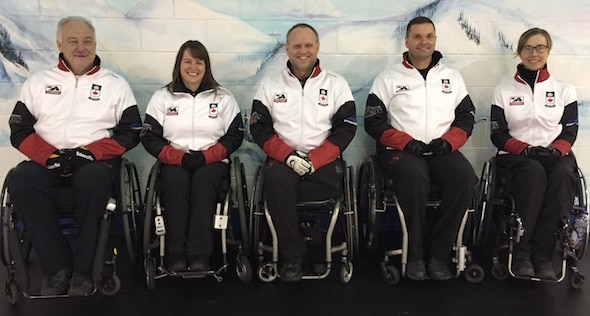 The same five players who won gold at the 2014 Winter Paralympics in Sochi have been named to Team Canada for the 2016 World Wheelchair Curling Championship, Feb. 21-28 in Zurich, Switzerland.

Wayne Kiel (Balgonie, Sask.) will be the National Coach in Zurich, while Joe Rea (Prince George, B.C.) will serve as Team Leader.

“This an experienced, talented and committed group of athletes and coaches, and their preparations for the trip to Zurich have been extensive,” said Gerry Peckham, Director, High Performance for Curling Canada. “Having Jim back in the lineup is great news, but Mark will be working closely with him in the house as we look long-term with the development of our wheelchair program.”

The 2016 Wheelchair Worlds will be the second in the three-year qualifying cycle to determine the 12-team field for the 2018 Paralympics in PyeongChang, South Korea. The host country is guaranteed one of the spots, so the other 11 countries will qualify based on results of the 2015, 2016 and 2017 Wheelchair Worlds.

Canada finished sixth at the 2015 Worlds in Lohja, Finland. The current qualifying standings can be found here: www.worldcurling.org/pyeongchang-2018-paralympic-winter-games

All five players, in addition to the coaching staff, have an abundance of international experience, and have played key roles in Canada’s ascendance to the top position in the World Curling Federation’s world rankings (www.worldcurling.org/wheelchair-curling-ranking).

While Gaudet — the only three-time Paralympic curling gold-medallist — is listed as the alternate, she will see game action in Zurich, said Peckham.

“Sonja is the quintessential on-demand performer,” said Peckham. “She brings a tremendous amount of experience to the team, and she’s great in supporting her teammates in competition.”

While it’s a group of familiar faces who will don the Maple Leaf in Zurich, the process to develop future Canadian Paralympians is fully underway, and the national team selection pool will be expanded in time for the 2016-17 season, and the 2017 Wheelchair Worlds in PyeongChang — the Paralympic test event.

“Our goal, as always, is to be on the podium in 2018, but we’re cognizant of the fact that we need to look beyond 2018,” said Peckham. “Making sure the next generation of Canadian wheelchair curlers is ready to take on the world is a significant priority for us.”

Canada has won a leading three gold medals at the World Wheelchair Championship — 2009 at Vancouver, 2011 at Prague and 2013 in Sochi. Armstrong, Gaudet and Forrest were members of all three teams, as was Rea.

For more information about the 2015 World Wheelchair Curling Championship, go to: www.worldcurling.org/wwhcc2016