A city that holds the attendance record for three different curling events will get another chance to show off for the world, it was announced jointly today by Curling Canada and the World Curling Federation. 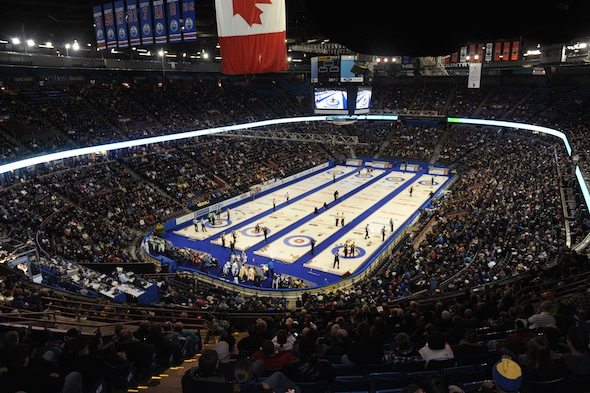 The 2017 Ford World Men’s Curling Championship will be played April 1-9 at Rexall Place in Edmonton. It will be the final chance for countries to earn qualifying points to secure berths in the 2018 Winter Olympics in PyeongChang, South Korea. “2017 will mark 10 years since Edmonton last hosted this event, which proved to be a record-breaking Championship, with the attendance numbers reaching an all-time high,” said Kate Caithness, President of the World Curling Federation. “We are certain Curling Canada, Ford of Canada and the local organizing committee will put on yet another great event. The competition is set to be extremely exciting, with not only the World Men’s Championship title on offer, but it will be the last chance for the men’s curling teams to earn Olympic qualifying points for PyeongChang 2018.” Edmonton has a rich history of hosting major curling championships; the city holds the attendance records for the world men’s championship (184,970 in 2007), the Tim Hortons Brier (281,985 in 2005) and the Tim Hortons Roar of the Rings Canadian Curling Trials (175,852 in 2009), with all three events at Rexall Place. “Edmonton curling fans have shown their support for major championships repeatedly over the years, and we know it’s going to be another wonderful show, on and off the ice in 2017,” said Hugh Avery, Chair of Curling Canada’s Board of Governors. “We have amazing partnerships with the World Curling Federation and Ford of Canada, and it’s going to make for a memorable event in Edmonton.” Twelve teams, including the host team from Canada — which will be decided at the 2017 Tim Hortons Brier in St. John’s — will battle for the world title. 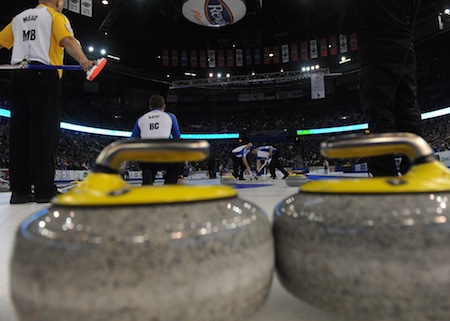 Additionally, it will be the second, and final, chance for countries to rack up qualifying points for the 2018 Winter Games. The seven highest-ranked countries, based on results from the 2016 World Men’s, presented by Ford of Canada, in Basel, Switzerland, and the 2017 Ford Worlds, will qualify for PyeongChang, joining the host South Koreans. Two more countries will come out of a last-chance qualifying event, likely in December 2017. Ford of Canada began its title sponsorship of the men’s and women’s world curling championships in 1995, when the first Ford Worlds was staged in Brandon, Man. “Ford of Canada is proud to be entering our 22nd year in partnership with Curling Canada,” said Gerald Wood, General Manager Western Region for Ford Motor Co. of Canada. “We are honoured to be title sponsor of the 2017 Ford Men‘s World Curling Championship, a truly world-class event. On behalf of Ford, I want to thank the City of Edmonton, the host committee and all the volunteers who we know will make this event a great success.” Edmonton is no stranger to hosting major championships. In addition to the 2007 Ford Worlds, won by Canada’s Glenn Howard, the city also has played host to six editions of the Tim Hortons Brier, most recently in 2013. “Edmonton is proud to host the 2017 Ford Men’s World Curling Championship,” said Edmonton Mayor Don Iveson. “With our successful history of hosting major international sporting events, combined with our enthusiastic fans and our volunteer spirit, I’m confident this competition will be an enormous success.” “We’re thrilled to have been chosen as the host site for the 2017 Ford World Men’s Curling Championship,” said Tim Reid, President and CEO, Northlands. “The people of Edmonton love curling as much as we do. Northlands is so excited to continue building on our legacy of hosting outstanding curling events.” The 2017 Ford Worlds will be televised exclusively and extensively in Canada by TSN/RDS2, from the round robin, through the Page Playoffs, semifinal, bronze-medal and gold-medal games. It will be Canada’s 23rd opportunity to host the World Men’s Championship. Canadian men’s teams have won 34 world championships since the event’s inception in 1959 — the most recent coming in 2012 when Team Glenn Howard claimed gold at Basel, Switzerland. “The eyes of the curling world will be on Alberta in 2017, and we can assure players, fans and officials that they will be in for a treat in Edmonton,” said Joan Westgard, President of the Alberta Curling Federation. “Edmonton has shown time and time again that it knows how to put on a spectacular curling event, and we’ll be ready to do just that in 2017.” “The volunteers and fans in Edmonton, and the surrounding area, are ready to welcome the curling world in 2017,” added Brad Gibb, Host Committee spokesperson. “We’re proud and excited at the same time to be given this opportunity by the World Curling Federation and Curling Canada, and we’re going to do our best to show them their confidence was justified.”